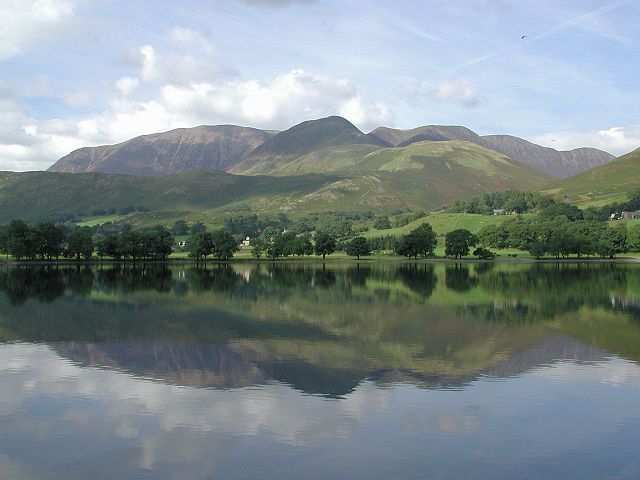 Usually, I like my pictures of lakes to be from one of the fells overlooking them. No matter how low the vantage point, depth adds drama to any picture, and I also prefer to know something of the shape of the body of water, and how it lies amongst the high lands that define its shoreline.
This photo is of Buttermere, a little lake, tucked away in the northwest of the Lake District, and the head of its Valley. In olden days, it was part of a larger lake, stretching out of the valley, before silting at its centre split the water in two, the lower and larger section forming Crummock Water. Buttermere takes its name either from the adjoining dairy pastures, or as a corruption of Buthar’s (or Boethar’s) Mere, after an 11th century Norse Chieftain who conducted a long-standing resistance to the Norman Invasion.
Romantically, the Valley is occasionally referred to as The Secret Valley, after the title of a very popular 1930 dramatized history of Boethar’s campaign by writer Nicholas Size.
But though Buttermere has great beauty to the eye, a chocolate box lake like Esthwaite Water, but in an infinitely more attractive setting, this photo shows little but placid water, reflecting green fells with clean lines in its barely-rippled surface.
The photo is taken from the path along the south shore of the Lake, a beautiful walk, especially at the end of a day’s expedition along the High Stile range that buttresses that side of the Valley. The camera is angled towards the foot of the Lake, with the houses glimpsed being outliers of the Village, and the deep trench in the hills seen angling away to the right offering escapes from the Valley, on foot by Sail Pass, with car via Newlands Hause.
Beyond this route lies the highest lands in this beautiful quarter. Whiteless Pike, a gorgeous short walk, thrusts itself forward in the centre, dominating the skyline by virtue of being so much nearer to the eye than either Grasmoor (to its left) or Eel Crag (to its right), the two highest peaks in the Northwestern Fells.
Buttermere is beautiful, restful, and a worthy base for a dozen fellwalks of differing degree but equal delight. It’s popular, and relatively east to access without your own transport. But from the shoreline, photos can’t be of Lakes but of the fells that hem them in. I’ll find you a more revealing portrait another time.