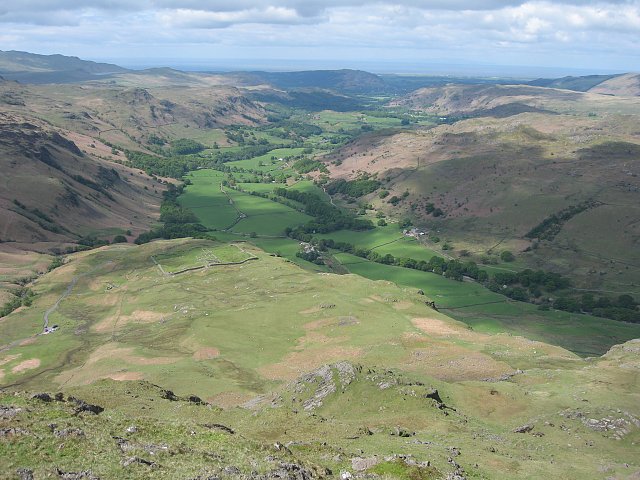 Middle Eskdale is that section of the valley that is designed by the road. This is the part of Eskdale to which the tourists come, hundreds of them brought daily by Laal Ratty, as many driving into or through Eskdale, through the villages that decorate its quiet environs. They walk besides the river, visit the church, visit Stanley Ghyll Force, they make little expeditions onto the walls of Eskdale, miniature peaks, lonely tarns. They rest, relax,eat chocolate.
The road from Ravenglass and the coast follows the Mite flank of Muncaster Fell until the ridge dips, and road and Ratty bear across to Eskdale. Some five miles further on, those with a taste for steep curves and tricky manoeuvres with the brakes escape over the shoulder of land to the east that lies behind Harter Fell’s pyramidal form: the infamous Hard Knott Pass.
This photo is taken from Border End, on Hard Knott fell, looking down on the old Roman Fort that is now claimed to be the southernmost element of Hadrian’s Wall. But the valley, wide and lush, lies in the centre of the eye, Middle Eskdale, extending itself to the activities of hundreds.
At the lowest part lies Eskdale Green, a straggling village at the foot of the Birker Moor Road, visited by two stops on the Ratty. The Outward Bound Centre occupies this part of the valley, screened by the lush trees that thicken and gather all through the valley. Then there is Dalegarth, where the little trains are turned around for the journey back to the coast. Boot, the capitol of Eskdale, a tiny hamlet under the Boat How Ridge, the gateway to Burnmoor and its Tarn. Just beyond it, the foothills around Eel Tarn and Siney Tarn, the southernmost ground of the Scafell Range, and Eskdale’s old inn, the Woolpack.
On the south side of the valley lies Harter Fell, a graceful cone that encourages even the timid to think of a spot of fellwalking, and the line of outcrops comprising Crook Crag and the superior Green Crag, marking the spot where the lonely wilderness of Birker Moor resolves into the Lakeland fells we love.
Middle Eskdale has come to terms with the tourists, without giving up any part of its soul. It allows them to share what it has, openly and freely, but does not compromise. It keeps the balance between the valley of Cumbrian farmers, and the hordes who come to admire, and it does so effortlessly.
And it beckons onwards, to the high fells at its head, granting the richest of its favours only to those who are prepared to put on their boots and put some effort into it.