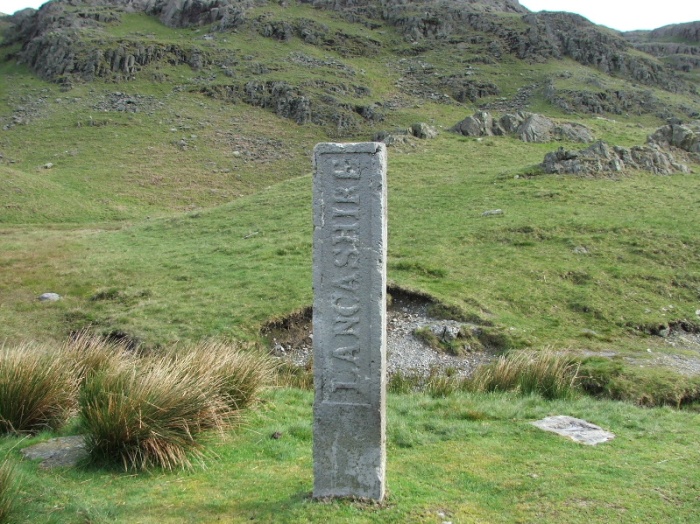 Our second walk was another Pass: Hard Knott’s complement, Wrynose. Hard Knott carried traffic on a steep, narrow fell-road from Eskdale to the head of the Duddon Valley: Wrynose carried  traffic on a steep, narrow fell-road from Little Langdale to the head of the Duddon Valley. My parents remembered it from courting, had a story about helping a man to push his overheated car the final two hundred yards to the top – only for him to take one look down the other half of the pass and insist on turning his vehicle around and going back the way he came!
I’ve the vague impression my Uncle was with us on this walk, which gives me cause to doubt the firmness of my memories, especially in terms of our third walk, from which he was definitely absent.
Wrynose was very different from Hard Knott: there was no overland route. The road, tightly walled, rose high above the beck, clinging to the side of the pass, so we walked the tarmac, there and back, treading only on the grass at the unexpectedly broad summit.
I was almost as miserable as the first time, the difference being that I had a stake in this walk. At the top of Wrynose Pass stood the Three Shires Stone, a five foot high limestone monolith, marking the exact spot where the three ancient Counties that, together, contained the Lake District met. Cumberland, Westmorland and Lancashire – carved on the face of the Stone that looked to the Furness fields – came together at this point, and still do: the 1972 Local Government Reorganisation Act abolished the administrative counties, creating the Cumbria of today, but left alone the hereditary boundaries, a fact promptly forgotten by the whole country, except for the determined standouts, few of whom are left forty years on.
And I wanted to see the Three Shires Stone, so, since there was equally no prospect of my Uncle or Dad taking a car up Wrynose Pass, the only way to do so was to grit my teeth and walk.
It was still too far, my feet still hurt, it was still too steep, the sun was still too hot, it was still difficult, I was thirsty again, my boots were maybe not quite as uncomfortable but they were heavy and not what I’d have chosen to stick on my feet.
But I got there. I saw the Stone, I got photographed next to it, with the Stone beating me out for height, I looked down into Wrynose Bottom and couldn’t see what had made the man turn round all those years ago, and generally I only whinged about half as much as I had the first time. No changes on the route down, no Roman remains to distract us from getting back to the car and driving to somewhere were they sold ice cream, or maybe fizzy orange.
I’ve driven Wrynose myself since, again out of the Duddon and into Little Langdale, a short-cut back to Ambleside and maybe-a-pizza-for-tea. It’s not as fearsome as Hard Knott at either end, though I’ve never been back to do it a second time.
The picture is of the Three Shires Stone in the place it has stood since 1860. A nearby plaque, set into the roadside, records its history. In 1997 the Stone was found broken into four pieces, presumably the consequences of an unreported road accident, but was carefully restored by the National Trust and re-erected the following year.