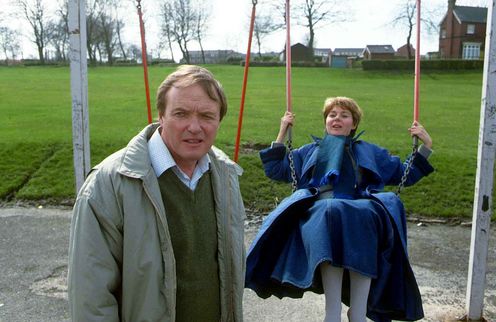 The first thing I noticed about watching the final part of The Beiderbecke Trilogy was how much I laughed from the very outset. The opening scene includes, indeed the opening line is spoken by a returning Big Al, with Little Norm in attendance. Suddenly, all is well. The gang is back, and so is the fun. And the story isn’t half as important this time.

Having taken almost three years to get from the Affair to the Tapes, the arrival of The Beiderbecke Connection (which, according to a contemporaneous interview, ought to have been The Coltrane Connection) in only twelve months was a signal that all was, and would be well. It was also restored to its original status as a Sunday night series in hour-long episodes, although there would only be four of them on this occasion. And everybody you wanted to see was back: there would no complaints as to texture this time.

Indeed, The Beiderbecke Connection swung over to the opposite pole, assembling a very full cast of Beiderbeckian characters and letting them get on with it whilst the serious plot, such as it is, takes place mainly a very long way offscreen, with only a small element of it troubling the Swinburne-Chaplin way of life.

It was almost as if Plater were experimenting with how abstract and minimal the story could be whilst its elements were in motion, and at some points it ran the risk of being entirely too attenuated.

Nevertheless, such as the plot is, let us try to explain it. The Connection was set approximately six months after the birth of Trevor and Jill’s son, who has competing names from the worlds of Jazz and Politics and so is mostly known as First-Born. Trevor bumped into Big Al and Little Norm for the first time in years, at the former’s new ‘offices’, the bowling green, whilst Jill interviewed ‘au-pairs’ for First-Born, enabling her to return to school: she settled on Yvonne, the former ringleader of 5C and chief deportee from Holland (a reprise for Judy Brookes, a pupil at the school used as ‘San Quentin’ High, given a minor role in the Tapes).

Jill’s return to school came at a time of crisis for an Education system starved of funds by a Conservative Government (yes, we are still talking about a quarter century ago). Mr Chaplin’s woodwork class study pictures of trees, having no actual wood, whilst Mrs Swinburne was expected to teach Tess of the D’Urbervilles with two copies among 38 pupils.

Two things happen: Joe and Ben, the bone-idle detectives from the Affair, who are to have a much greater role in the Connection are called to the shoplifting of books from the Bookshop in the Precinct, and extra copies of Tess start turning up in Jill’s class.

Plater doesn’t even try to conceal that Jill’s pupils are nicking extra copies of the book to keep the class going, nor that it is Yvonne who is masterminding the operation. The underlying theme of this story is the funding crisis in Education, and the lengths that people would, and should, go to to give their children the education they need.

Yvonne’s operation was running in tandem with a larger-scale effort by Big Al to provide greater necessities, such as wood and sports equipment, all delivered by Charlie, the moonlighting gravedigger, whose continual appearances with lorry-loads provokes the perpetual ire of Mr Wheeler. This is the context for Trevor’s indignant statement, as a new and very devoted father, that if it were a case of stealing to get his child an education, he would steal.

(This declaration later prompts a wistful, hesitant declaration from Mr Carter that Mr Chaplin’s speech has reminded him of his young days in the profession, when he carried the torch of education in his eager heart, which, alas, many years ago…: “I shall try in my heart to forgive you.”)

But this has nothing to do with the plot, which we’d better try to find. Having met Trevor in the park, Big Al and Little Norm produced first a gift – an intercom for bedroom to lounge baby communication – and a request for a favour: accommodation overnight, safe-house mode, for Ivan, an East European refugee and fellow radical. Ivan speaks no English, but likes Jazz, especially Bix Beiderbecke.

Having agreed to taken Ivan in overnight, Jill and Trevor ended up having him as a guest for a week. They were asked to take him to the border (the Lincolnshire border, at the Humber Bridge), but he turned up back at their house  almost as soon as they got back to Leeds. In episode 2, Ivan was delivered to the Lancashire border (I will forgive and gloss over certain things said about England’s most noble County). Of course, at episode’s end, the doorbell rang again: everyone expected Ivan, but Plater was playing on that reaction: the new ‘refugee’ was Peter Swinburne, Jill’s ex-husband.

What might have been an embarrassing occasion was dealt with by aplomb and acceptance, initially from Trevor, subsequently by Jill. Peter is the past, a past rejected, and a past that still doesn’t really understand why, and really doesn’t understand how Trevor can have become so much more to Jill than he ever was.

Peter was also an ex-con, literally, having done time for Fraud. And, by remarkable coincidence, he used to share a cell with Ivan, whose venture into Lancashire was no more effective than that into Lincolnshire. Ivan, it turned out, was not a refugee but a bank robber, one who worked with a computer, and who got away with £3,000,000.

Thanks to Peter having a mate on the coast with a boat that will get the criminal pair off Trevor and Jill’s hands once and for all before the first ads in the final episode, the story is concluded satisfactorily. Those holes that are obvious holes, such as what happened in the other counties, and how did this suave, intelligent and very dangerous man ever get to be dependent on Big Al in the first place, are left to the viewer’s imagination.

Though the last one was given a surreal tweak by the late arrival of Chief Superintendent Blake to put the Police on high alert to find this dangerous financial subversive, in part responsible for the 1987 Stock Market Crash, who might tilt the world too far on its axis…

The Police, at this point, is Hobson. Our old friend of the Affair has prospered as a consequence of shopping his Superintendent. He is now Inspector Hobson, and he has a Ph.D out of it. (He is also the star striker for Q Division’s Mixed Hockey Team, with 31 goals to his credit last season). Hobson doesn’t do a lot this time round. He spent his time mostly in his office, giving instructions to Joe and Ben, who do the, ah, leg work, not that work is an appropriate word for their activities.

As far as screen time goes, Joe and Ben (who had a very minor role in the Affair) are second only to Jill and Trevor in the Connection. With Stephem Tomlin unable to reprise the role of Ben, the part was played by George Costigan, in Miami Vice imitation pastels and jackets with the sleeves pushed up to the elbows. His faux-eagerness is the perfect foil to Sean Scanlan’s laconic, dry, vaguely Scottish Joe. These are the kind of Detectives who, when ordered to investigate the theft of sports equipment – including Hobson’s hockey stick – elect to spend the afternoon at Headingley, in case someone plans to rush onto the field and conduct a smash and grab raid.

No, The Beiderbecke Connection does not pay overmuch respect to its story. Instead, it gives its characters room to breathe, and to play. It’s not above seriousness: as well as Trevor’s impassioned stance on his child’s education there is a momentarily bleak, wholly unfunny and deeply serious speech from young Yvonne who, faced by Jill and Trevor’s concerns for her future should the Police catch her, explains exactly why it really doesn’t matter.

It’s a moment of bottomless depth that is still horribly true today.

As with its predecessors, the Connection was novelised, though not until 1992. I have never seen it as a separate edition, only in the paperback omnibus of all three. It makes for an amusing experience. The three series follow the same continuity on television, but the novel of the Tapes follows Plater’s original manuscript, making for confusion in the omnibus. It doesn’t matter too much that in the third book, Trevor and Jill refer to getting pregnant in Edinburgh when in the second book it distinctly took place in Athens, nor that the last meeting with Al and Norm was not that long ago, given that the the Tapes novel it is they, leading a redundancy package holiday, who rescue our heroes from the Grey Guardians.

But it’s distinctly odd when Mr Pitt, redundant and using his money to fund a jazz club at which Frank Ricotti’s own band plays, refers to his lateral promotion to the Registrar’s office when not all that long ago the role was played by a Mr Dawson, and even more so when Inspector Hobson appears after ex-Sergeant Hobson, now of a security service, has been advising Trevor and Jill about disinformation.

It’s all of a keeping though. The Connection  disappears up its own tail at times, and you really should not try to make the story work out in any kind of a real world. Just accept it on its own merits, as the quintessence of a world in which people respond to men in suits with a deadpan daftness. Listen to the music man, be cool.

I’ve a tremendous fondness for it for a reason I’d long forgotten. By the time this final series was broadcast, I was deep in a loving relationship with a smart woman who relied on me as much as Jill relied on Trevor but who was equally determined never to admit to it. It wasn’t the situation though, but the conversations: I had forgotten just how much of it could have come out of our mouths when we were together.

But it was right to end where it did. Apart from the magic number 3, there was First Born: you can’t have heroes going on adventures when you’re that dependent on baby-sitters. Besides, Trevor and Jill were implausible but believable, and their adventures were plausible but unbelievable. You can’t go on like that.

What I’d like to have seen was Plater spinning Joe and Ben off into their own series. I swear it would have worked: I’d have been there in front of the set, with my guffaws all ready.

Not that Jill and Trevor really did go away. The DVD set is a steady seller, and Plater kept getting enquiries after the pair, and what was happening to them now, and he could see them in his mind’s eye, growing older in body but never in mind or spirit. In 2003, Mrs Swinburne was the Head Teacher of San Quentin High, bottom of every League Table going, whilst Trevor was retired and given to dominoes, with Big Al and Little Norm.

Alan Plater died this year, leaving behind him a body of professional work of which he could be justly proud. The Beiderbecke Trilogy, combining his twin passions of his native Yorkshire, and his beloved Jazz, is a worthy memorial. Watch it and laugh.

2 thoughts on “The Beiderbecke Trilogy – Part 4”