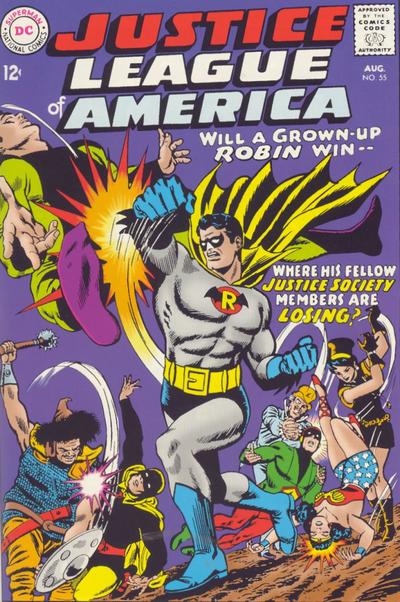 In China, bandit How Chu is tied to a stake, awaiting execution, when a black sphere appears out of the sky and merges into him. He gains immense strength and invulnerability to bullets and escapes to continue robbing. In Chicago, stenographer Claire Morton is dreaming of jewellery during her lunch hour when a black sphere merges with her: she smashes the windows and steals the gems. In London, businessman Horace Rowland is striding towards the bank to complete a profitable business deal when a sphere lands near him, and he picks it up out of curiosity: he breaks into the vault with great strength and steals the cash. Lastly, ex-fielder Marty Baxter, invalided out of the game due to arthitic pain, is disconsolately watching baseball when he too is merged: full of anger, he sets out to destroy the stadiu,.
Rapidly, all four people adopt costumes and start a crime rampage.
All this, we learn, has taken place on Earth-2, where the Justice Society are meeting to welcome their first new member in 19 years. This is Robin, the former Boy Wonder, now fully grown and inducted into the JSA as an (implicit) successor to Batman (who is not present: though semi-retired, he takes on special cases and is off on one at the moment).
Robin’s first mission is to assist the JSA against these four super-powered crooks. The Sports-Smasher beats Wildcat and Robin into a pulp. Wonder Woman is beaten by Gem Girl’s ability to manipulate jewels to assist her. Hawkman and Mr Terrific are brought down by the Money Master’s ability to manipulate external objects and floor them, whilst Hourman tackles How Chu, but is left buried by his ability to conjure up whirlwinds.
The defeated JSA return to their meeting rooms to find Johnny Thunder, who’d been late, waiting for them. Directly he hears what’s been going on, Johnny T sends his Thunderbolt to capture the four super-crooks, but half an hour later, the Bolt returns, beaten and bruised and unsuccessful.
Crestfallen, Johnny sends the Bolt to Earth-1 to bring back some Justice Leaguers, in the hope they have some new ideas. The Bolt returns with Superman, The Flash, Green Lantern and Green Arrow, all of whom are similarly dishevelled, and none too pleased at being snatched off their Earth. It seems they have been struggling against similar super powered foes and didn’t like being interrupted. However, they agree to stay and see if a joint action can bring any results they can take back to Earth-1.
By chance, it is revealed that the Thunderbolt, being less dumb that Johnny Thunder, has checked out what the black spheres are. It appears that they were creatures from another Universe. They, and it, had reached the peak of evolution and, when their Universe began to fall back, flung themselves into Earth-2’s Universe, hoping to connect with creatures that can help them survive and grow further.
Unfortunately, for the black spheres, only four of them made contact with humans and, unfortunately for everybody else, a chemical reaction between the two has turned the humans evil. What’s worse is that, at the moment, the black spheres are dormant in their hosts’ bodies. When they awake to full sentience, they will be unstoppable.
End of part one.