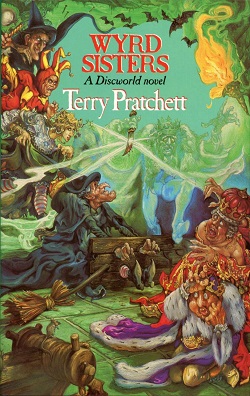 This is the one.
It’s the opening scene. A blasted moorland. High mountains. A flash of lightning illuminating a dreadful scene. Three huddled figures around a bubbling cauldron. An eldritch shriek splits the night: “When shall we three meet again?”
Then, after a pause, an ordinary voice replies, “Well, I can do next Tuesday.”
It’s the archetypal Terry Pratchett moment, and I howl with laughter every time I read it, every time I think of it. Let’s face it, if you haven’t laughed at that, you and I have absolutely nothing to talk about.
To put it at its simplest, this is where it clicks. Where everything comes together, without a single false note. Where Pratchett starts pulling comedy gold out of everything in sight. Where story, character and theme blend together to make each element a simple delight and the whole something far greater than the sum of its parts. There will be the odd, less-than-brilliant book to follow, but they’re going to be rare, and even the least of these will still be better than nearly everything around them.
The prentice phase is over.
Wyrd Sisters brings us back to Granny Weatherwax, or rather it re-introduces Granny, along with the rest of the Three Witches, Nanny Ogg and Magrat Garlick. Forget the Granny we saw in Equal Rites, think of her as a distant relation, the Earth-2 Granny, this is the real thing. The Kingdom of Lancre solidifies around them. The Fool capers dismally, concealing not only a very keen intelligence but also a solid core of human decency, of a kind that will grow to be the underlying characteristic of all Terry Pratchett’s work.
It’s revealing nothing anyone doesn’t know to call this book a Shakespearian adventure. It’s full of exaggeration and inversion, puns and jokes, madcap notions and – which is what always distinguished Pratchett from his (laughable notion) competitors – the gift of depicting a thing in the elemental form that underlies it. It’s about the Theatre, about the ability to lie openly and create the truth. About a form of magic vastly different from that which the Witches manipulate, because it is made between human beings collectively.
The plot is nicely basic. King Verence of Lancre is assassinated by his cousin, Duke Felmet, at the behest of the latter’s bullying wife, the Duchess. Both the Duke and Duchess are, in their separate ways, quite mad. They’re obviously MacBeth and Lady M, though Pratchett distributes the latter’s role between the two conspirators.
There is an heir, a baby, rescued from the melee, and placed by Granny and the coven with strolling players, where he becomes an actor. But the Kingdom needs his return, and despite having made a very good case why Witches can’t meddle and raise Kings, Granny moves Lancre through fifteen years to enable an adult TomJohn to return to his inheritance.
Except that he doesn’t want it. And fortunately there’s a slightly elder half-brother, named Verence, who can take over as King. Kind, conscientious, ecstatic at being able to rip of the hat with the bells on it, not to mention interested in Magrat.
And he and TomJohn really are half-brothers, which is not to say that the late King Verence I is necessarily their father…
What Pratchett had found in this book was the sense of Discworld being a mirror, a twisted, funhouse mirror, but not of Fantasy but rather of Reality. Fantasy ceases to be the subject of Pratchett’s humour, and becomes the vehicle. Each book from now on will have a theme at its heart that resonates, which Pratchett digs into, and draws out of it unexpected insights and deep wisdom, all of which is expressed through laughter.
Let’s not leave without noting the first appearance of Nanny Ogg. Granny’s old friend and sidekick, Nanny arrives full blown, a force of nature in herself, complete with her enthusiasm for that unusual folksong about Hedgehogs. Nanny, the all-mother, the living proof of matriarchal supremacy, secure in her domain.
It’s leaping ahead, but Pratchett once commented that he’d made Nanny a mother of fifteen, and started throwing in names for sons and daughters willy nilly. One day, he thought he’d better add them all up, and found he had named exactly fifteen. He seemed to be a bit surprised at that. I’m not. Whether you call it That From Which It Comes, a la Dave Sim, or a subconscious sense of structure, as I do, it’s a great thing to have.
A lot of writing comes from far more than deliberate thought.