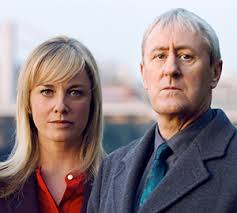 Bit more of the one on the left, please

After the praise I’ve been heaping on New Tricks, this episode was a disappointing reversion to the staple fare of many seasons. There was a cold case to solve, which was completed successfully, some (but not many) personal issues among the cast, and that was that. Of the moral ambiguity that has been so successful in the past series or so, there was little or no trace, and what there was of it – a fundamental element in the commission of the crime – was stapled on in an utterly unconvincing manner.

Or unconvincing to me, perhaps, but then I was certainly biassed.

The cold case went back to 1989, and to the wide-boy, loadsamoney traders in the City, Thatcher-worshippers to a man and the occasional woman: selfish greedheads, ugly bastards, monsters of self-entitlement. Charlie Wheeler had apparently been very good at his trade, until he was discovered as having lost half a million pounds and nose-dived off the roof of his brokerage’s very high, penis-extension of a building. Suicide, of course.

But in an unlooked-for and certainly left-field manner, evidence appears that Charlie was pushed, which brings the case into UCOS’s purview. After which, it was the usual interviewing of people, uncovering of things not revealed at the inquest, and the gradual narrowing of suspects down to the one who appears early and who seems to be completely clear of everything until it winds up being him. That much, at least, is a New Tricks formula, though I’ve seen it handled far better, on cases where the ultimate culprit was a lot further from the frame at first.

But the people involved, and the time, could spark no sympathy from me. They were all of a type I loathe, sons of Maggie, celebrating her for the freedom she gave them to slash, burn and destroy to the exclusion of human feelings. Along the way, the alpha male of these alpha males rather pathetically gave himself away for a long ago, unreported rape, but there was something unreal about it, as if it were a gesture on the part of a scripter, far too late to be of meaning.

And a similar gesture was invested in Charlie, as if to humanise him. You see, Charlie, whose marriage was failing (and whose ex-wife, and the consequences for her, another victim, were kept well away from both investigation and story), had a Chinese waitress for a girlfriend, who was pregnant by him. And this was 1989, a year which we who lived through it still remember most vividly: Tiananman to Timisoara.

So master market reader, genius money-maker Charlie, who’d won the cutthroat battle to take-over, sits down in a side-office and watches the tanks go into Tiananman Square, watches the brutal crushing of the people off whom he’s been making all this luvvly money, and undergoes a Damascene conversion. He’s going to pull out, leave, take his money, ruin everybody else’s fun. So off the roof he goes.

And is any of this remotely convincing? Is it fuck. Is it also sickening to use such a monumental weight upon history as a clue in a TV script? Oh,  but it is.

As for the ongoing elements of the series, this episode featured the return to duty of Sasha Miller, though not until twenty minutes in, by which time I was growing very suspicious of the shift in dynamics. Even then, immobilised as she was in a wheelchair, Sasha could not make herself an active participant, a fact emphasised by having all the men always standing whenever she was in a scene, minimising her physical presence.

Even starting by politely throwing Ted Case out of her office didn’t restore Sasha to her position, nor did her invitation to Ted to stay on as part of the team, Gerry Standing’s successor, elevate her back to being boss. I’m not making any anti-feminism accusations, although they can easily be read in, we’ll see how things are next week. Though this is something not to develop, if you get my meaning.

Another element which seemed cooked up solely for the theme of this episode was Steve McAndrew’s sudden financial penury, represented in credit cards being declined and dropping two grand on a course in how to play the markets, being run by the one unsuccessful broker of the period (those who can, do, those who can’t…)

Not a bad episode as such, just a perfunctory one: insubstantial airfill, as I described the series when I first wrote about it. A produce-in-your-sleep job.

Though there one was one good moment. Steve went to pick up the ultimate culprit and found him packing rapidly. Actually, Wolf (of course he’s called wolf, these guys were wolves, get it?) has packed two bags, and the other is full of wads of twenty pound notes, crisp and clean. It’s a solution Wolf believes is infallible, like always: he turns his back, counts to five and when he looks back he can’t see the bag, nor Steve.

So Wolf starts counting, and we start anticipating the look on his face when he turns back and Steve’s still there. Only he’s not, he’s gone. And so too has the bag.

Wolf completes his packing and leaves. And he sees Steve again. And the bag. And two uniformed officers standing by a patrol car.

Nice, and neat, though given the utter implausibility of Steve actually taking the money, no matter how desperate he is, a touch banal. Unless that is an element that they do intend to develop over the remainder of the series. I could just about see that as a way towards an ultimate end, a real, dramatic end to UCOS.

Because do the BBC plan an actual ending, or is it just going to be a petering out, a leaving for a never-to-be-made series 13? Interesting question.