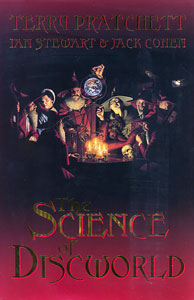 Terry Pratchett wrote two Discworld books in 1999. I can’t remember the publication dates but, given the general schedule of Discworld novels since he stopped writing two a year every year, I think it most probable that The Fifth Elephant was the later of these two, Which means that I now have to consider the first in the series of collaborations Pratchett produced with Ian Stewart and Jack Cohen which, incidentally, featured the first cover drawn by Paul Kidby and not Josh Kirby.
The Science of Discworld books are not usually counted as proper Discworld novels, which is understandable in respect of the amount of story in them. Nor is there any crossover from the books into Discworld continuity as such (except for Rincewind’s honorary appointment to the now-vacant post of Egregious Professor of Cruel and Unusual Geography). But come on, there’s Rincewind, and the Faculty, and the Librarian, and if that isn’t enough there’s the D-word up there in the title, so let’s not be pernickety about this.
The Science of Discworld is an unusual book, combining popular fiction with popular science, in alternating chapters. I’ve read the bits by Stewart and Cohen, which seem clear and readable and which contain nothing of so great a scientific complexity as to baffle me (not like A Brief History of Time then). If anything, in a few places, I found that the effort to put things at the level of the ordinary reader a bit too jolly hockeysticks, to the point of being patronising, and I am no science buff.
After the first couple of occasions, I’ve tended to miss out the factual bits, and just read Pratchett’s own contributions. Unfortunately, in this book, that pans out as inadequate.
There are two things here that prevent Pratchett being enough of Pratchett to make this an utterly enjoyable experience. The first is the book’s structure: Pratchett writes the odd-numbered chapters, Stewart and Cohen the even-numbered chapters. We’re not used to reading Pratchett in chapters, nor in any kind of discrete chunks. There’s no flow, no rhythm, no sustainment. And worst of all, after every piece, we have to sit back and have it explained to us in realistic terms. It’s a constant change from chocolate to cabbage: we, and Pratchett, never get a proper run at things.
It’s an effect that’s only magnified the longer the book goes on, as the explanations get longer and longer, and Pratchett’s set-ups – because that’s what they are – get shorter and shorter, and we’re sometimes lucky to get as many as two pages of Discworld at a time.
The other problem is that Prachett is not actually writing a story. There’s no plot, no conflict, no drama. Or rather there is, but it’s not of his doing: it’s being dictated to him because it’s the story of the evolution of the Universe, the Earth and its creatures, including that seriously-late-to-the-party arrival, Man (and Woman).
Pratchett puts a frame on that story by first introducing one of Ponder Stibbins’ experiments that, upon splitting the thaum, creates enough magical energy to swallow the entire University whole, en route to taking everything else with it. That is, until Hex sops up the magic by using it to run the hitherto theoretical Roundworld Project, an experiment in creating a completely absurd world that is not only spherical instead of the normal flat, but also without magic. Or Turtles. Except the ordinary ones.
Once this is in place, Pratchett has his Wizards investigate the phenomenon as only they can. It’s amusing, frequently, but since his primary purpose is to dance through the sequence of events to set up Stewart and Cohen, it’s a story written under built-in constraints that bog him down.
It’s a positive pain to read through this book carefully flipping over all the even-numbered chapters (there are twenty-two of them). In The Science of Discworld, the story isn’t really worth it.