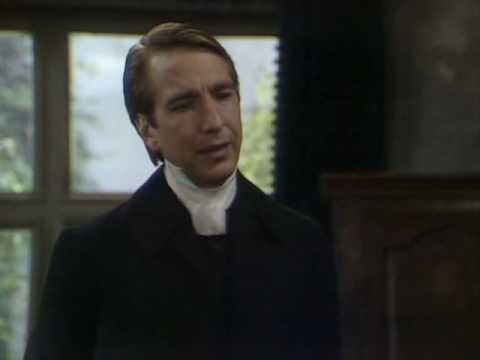 Back in 1995, playwright, novelist and television dramatist Alan Plater gave a big interview to the Guardian on the Saturday that his new series, Oliver’s Travels, based on his fifth and final novel, began a five-part adaptation on BBC. He slated the production, detailing the many ways in which the producers and director had undermined, ignored or just mistreated the story. He made particular reference to the casting. The title part had been written for Tom Courtney but he hadn’t even been approached, the role instead being played by Alan Bate. The female lead was played by Sinead Cusack in her native Irish accent, although the point of the character was that she came from Northumberland, and her similarly Northumbrian son’s role was given to an actor with a pronounced Cockney accent.

Despite all that, I still watched the series, because it was Plater, because I enjoyed the novel. He was right, though. The series simply did nt work because – and I watched this pile up with fascinated horror as the weeks accumulated – not just the principal actors, but everybody, down to the shortest walk-on, line-saying role, was wrong.

It was stunning in its own way. How can you cast a prestigious Saturday night series and miscast absolutely everyone? Not a single actor fit their role.

And whilst I watched Oliver’s Travels drown in this fashion, I thought back to Plater’s own Beiderbecke Trilogy, and I realised for the first time that part of its beauty and charm was that it was one of the most perfectly cast series I’d ever seen. And it still is: there’s not a role on the series, down to the smallest, that isn’t played by someone who is the slightest bit out of step.

Which is by way of a lengthy prelude to today’s bingeathon, which I promised to myself last week, when the dreadful news of Alan Rickman’s death broke on us. Rickman’s first major role on screen was as the Reverend Obadiah Slope, in the BBC’s seven-part adaptation of the first two of Anthony Trollope’s Barchester novels, under the title, The Barchester Chronicles. Fittingly, the dramatisation was by Alan Plater, and it is the equal of The Beiderbecke Trilogy in being the most perfectly cast series I have ever seen.

The Barchester Chronicles was first broadcast in 1982. I remember hearing it being described as a story set amongst a feuding religious community, and deciding that was not for me. In 1989 or 1990, I can’t remember which, it was repeated on BBC2 on Tuesday nights at 9.00pm. I was newly in my first house and had taken a week off to decorate my lounge, starting with the back wall, which was the simplest – no wondows, doors or chimney breasts – but longest. After a day of videotapes, I had gotten surfeited with Last of the Summer Wine and was grimly pasting up the last sheet to something on BBC2. I was in mid-sheet when that finished and I overran into the next programme.

When I got to the screen, I immediately recognised the lovely Barbara Flynn and stopped to watch. Fifty minutes later I was hooked, and looking for the paper to check just what it was I’d been watching.

Plater’s dramatisation adapts The Warden and Barchester Towers. The first is a short novel, a ‘one-decker’ as it would have been termed on publication, taking as its theme a series of Church scandals exposed in the Press, of clergymen being paid excessive income for minimal duties administering charities, whilst the poor beneficiaries get almost nothing.

The Reverend Septimus Harding is the Warden of a Hospital caring for twelve old men. He has a lovely home for himself and his daughter Eleanor and a more than ample income. He was appointed by his lifelong friend, Bishop Grantley, whose son Theophilus, is both Archdeacon, and Harding’s son-in-law. Local Doctor John Bold, a reformist campaigner (and aspirant to Eleanor’s hand) uses the Law and the Press, in the shape of the Jupiter (i.e., the Times) to challenge the situation. Ultimately, by legal technicality, the Esatablished Church prevails, but Mr Harding, a simple and good man, resigns his Wardenship, having come to the moral belief that he is not entitled to riches from the Charity when the stipend for his old charges and friends has remained unchanged for 400 years.

The Warden takes up the first two episodes. The series stars Donald Pleasance as Mr Harding – playing against type as a gentle, somewhat unworldly, round-faced, cherubic old man, Pleasance being mainly known for playing villains – and Nigel Hawthorne as The Archdeacon. Pleasance is delightful throughout, the only true clergyman in the whole series, retreating, accepting, but still having enough of a will of his own to do what he sees as the right thing in the face of everybody else’s opinions, but Hawthorne (then still staring in Yes Minister) steals the shows, with his overdramatic gestures, his rages and furies, exasperations and desperations, and his oily, briliantly comic smoothness.

Hawthorne is in his element, overplaying his part to the finest degree. I find myself snorting with glee at nearly his every line and movement. It’s a theatrical performance – indeed, the whole series eschews naturalism – but it’s judged to be heightened theatricality, without ever once toppling over into self-parody, ridicule or camp.

There’s a fine array of second-line characters to support this pair over these first two episodes: David Gwillim as John Bold, realising the personal consequences of his principals, the lovely Janet Maw as Eleanor, overwrought at the attack on her beloved father from the man she loves, the aforementioned Barbara Flynn as John’s sister Mary, George Costigan as the Jupiter journalist, Tom Towers, and the blithely lisping Angela Pleasance (Donald’s daughter) as his other daughter Susan, Mrs Grantley. 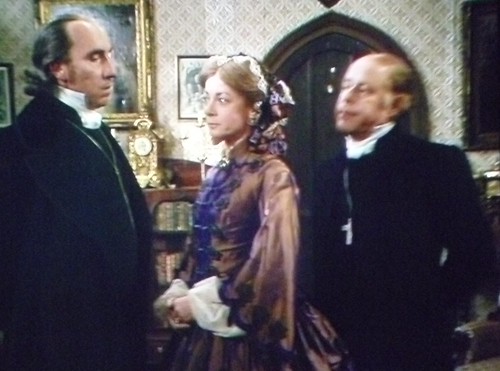 Still and all, it’s when the adaptation moves on to Barchester Towers that the fun starts to soar. John Sutherland has argued that there is textual evidence that the book was originally planned as a direct sequel, of similar brevity, again focusing on Mr Hardin’s Wardenship, but instead the book expanded in length and cast, to great delight.

Bishop Grantley is dying, but unfortunately for his conflicted son, he outlasts the current Government, ending the Archdeacon’s chances of being appointed his successor. Instead, the new Prime Minister instals Bishop Proudie (Clive Swift). The Bishop is a weak-willed, temporising man, under the thumb of his very determined wife, Mrs Proudie (Geraldine McEwan) and preferring to delegate as much as he can to his private Chaplain, the Reverend Obadiah Slope (originally Slop), an ambitious young man under the patronage of Mrs Proudie. This is, of course, Alan Rickman.

Though this is not emphasised in book or series, the Proudies are Low Church, seeking to establish themselves and their doctrines in a City and Diocese that has thus far been very High Church. Indeed, Mrs Proudie and Mr Slope are very quickly seen as enemies, and it is the interweaving schemes, oppositions and manoeuvres of the opposing factions, and their sheer energy for each other’s destruction that plays out for the rest of the story.

And that’s not all. At his wife’s insistence, Bishop Proudie summons the Canon-in-Residence, Doctor Vesey Stanhope, and family, back from Lake Como, Italy, which has been his actual residence for the last twelve tears (he originally left for his health: a persistent sore throat). This brings back the Stanhope children: the forever laughing, amoral Charlotte, the irresponsible, impecunious, hopeless Bertie (played with great gusto by Peter Blythe, otherwise best known for his ‘Soapy’ Sam Ballard, the new – and preaching – Head of Chambers in Rumpole) and the beautiful but crippled Signora Madeleine Vesey Neroni (played as a manipulative schemer by the still decidedly beautiful Susan Hampshire).

At a stroke, the cast trebles, and the number of heavyweights doubles, or at least so you’d think. McEwan and Hampshire, added to Pleasance and Hawthorne? But that is to fail to reckon with Rickman, a young actor in comparison, an unknown to the television public, but he effortlessly holds his own, and frequently does so much more that his seniors, stealing scenes with no effort, even scenes when he has three or four other actors, playing to the hilt around him.

McEwan is monstrously good. She, like Hawthorne, adopts an entirely theatrical approach, but instead of his extravagant gestures and expostulations, McEwan adopts a gravelly monotone, rising in intensity but not pitch. She’s a monster, and it’s her own husband who is her victim, but she is at all times convinced in the absolute rectitude of her every thought, word and deed. Her scenes opposite Hawthorne are awesome.

As Mcewan’s foil, Clive Swift puts in a masterclass of subjugation. Compared with McEwan or Rickman, he gets the worst of it for lines, especially in scenes featuring these three alone, but he is epic in his expressions as the camera passes him, or catches him in the background. He may be the stooge, but you feel every moment of his despair at never getting any peace.

The plot is incredibly complex, and incorporates separate but simultaneous attempts to get the widowed and wealthy Mrs Bold (Eleanor is deprived of her husband in between episodes, and gets a bouncing big baby as an exchange, plus a heavy dose of unflattering widow’s weeds, which also do their best to make Barbara Flynn look unattractive). The dissolute Bertie cannot do anything to pretend that his intentions are other than purely mercenary, but it is the importunate Mr Slope who presses his suit so far as to prompt Eleanor to slap him round the ear.

Rickman is just so good at Slope that whenever he is onscreen, you expect to find pools of slime leaking out of the DVD Player. His casting was certainly against the character’s appearance in the novel, where he is red-headed and physically unprepossessing: Rickman is allowed to be his real self, tall, dark-haired, handsome, a very clever decision that justifies his being able to persuade the ladies he pursues – the Signora after he sees her, Mrs Bold after he learns she is wealthy – to tolerate him long enough for him to worm his way into their lives.

Rickman, like McEwan, restricts his range. He is slow and deliberate, with little bursts of urgent progress, a strutting walk. He reacts carefully to things, often moving only his eyes until he has absorbed the new information. He is an out-and-out slimeball, but Rickman makes him both obvious and plausible in this trait. He can’t take the audience in, and he isn’t trying to, but you can see him, in the more stratified and socially hidebound society of the mid-Nineteenth Century, taking other people in.

There’s just so much to enjoy throughout this series. We see another side of the Archdeacon once he becomes an ally of Mr Harding, as opposed to an adversary, and Pleasance is kept busy with responsive lines to Hawthorne’s outbursts which are sitcom funny but which he delivers without a trace of laughter (I am still unable to decide if he is making pointed jokes or innocent replies, which is another facet to Pleasance’s performance that  delights).

To someone attuned to the wit of this adaptation, without it ever once trying to be funny, The Barchester Chronicles is incredibly funny, and the performances throughout are magnificent. The casting is perfect, but it is Alan Rickman who steals the show, every bit as good and better than star actors, theatrical legends, who ought to blow him out of the water, but instead accept him as an equal. He already was their equal. And he became himself a legend.