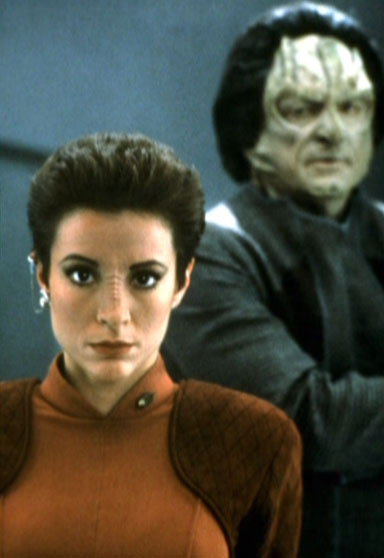 No Deep Space Nine recap last week, thanks to the demands of real life, but this has given me extra time to think about ‘Duet’, the penultimate episode of season 1 and, barring something exceptional from the finale, the finest episode of the season.

‘Duet’ is described in Wikipedia as a ‘bottle’ episode, a term I’d never come across before. It originated in relation to the original Star Trek, though the phenomenon existed before: it’s a shorthand for ‘ship-in-a-bottle’, coined by the cast to describe those low-budget episodes that confined themselves to just the cast and existing sets.

‘Bottle’ episodes are budget-preserving exercises, low-cost affairs with minimal (if any) guest stars, filmed solely on the regular set(s), that help free up the season budget to facilitate the more high-power, effects-intensive episodes such as season finales. They sound like filler episodes, and some of them are, but they can also be some of a season’s best episodes, forcing the writers to concentrate upon character to a greater depth than is usually possible in better-funded stories. ‘Duet’ is a brilliant example of this.

I make a point of not researching any episodes of DS9 before watching, trying to come to them as fresh as if I am watching the first transmission. Only afterwards do I look into them, and I was encouraged to find that ‘Duet’ was generally acclaimed as the best episode of season 1, and one of the best overall, so it wasn’t just me.

That this was to be an episode with a string theme was immediately clear when the open made no attempt to misdirect as to the story. DS9 is hailed by an incoming ship seeking medical aid for a passenger suffering from Kalla-Nohra, in need of medication. The only known cases of Kalla-Nohra are among survivors of a mining accident at the Bajoran Forced Labour Camp at Gallitap, during the Cardassian Occupation, a camp liberated twelve years ago, in conditions of horror, by Major Kira’s Resistance Group. Survivors are Bajoran heroes, and Kira wishes to meet this one. The shock is that this patient is a Cardassian: Kira promptly has him arrested as a war criminal.

Thus begins the exploration of a puzzle with several depths, as the reality of the prisoner and his true background goes through several stages, changing each time. It’s also a psychological exploration of both the Major and her prisoner. We know her to be angry, filled with hatred of the Cardassian, the oppressor, the ruthless dictator, and we know how passionate she is, and how hot-headed. Kira sees her prisoner as not merely an enemy but also a butcher, who she is determined to bring to justice, or at least execution.

But the Cardassian, who gives his name as Aamon Marritza, pleads innocence: he has never been to Gallitap, was a Filing Clerk, is a Military Instructor (in filing) and doesn’t even have Kalla-Nohra.

Some of these claims are exploded easily (Marritza does have Kolla-Nohra, he was at Gallitap) but the rest of it seems provable. Marritza switches his story, admits to being at Gallitap, but only as a Filing Clerk, innocent of everything except shutting his ears to the slaughter.

The parallel with Nazi Concentration Camps is obvious and intentional. What Kira saw has fueled her fury, her determination to see Marritza face execution. When Sisko attempts to remove her as head of the Investigation, she insists she can be professional, though her ever-escalating anger against the Cardassian suggests otherwise to the audience.

So to what extent, on this latest version of his story, is Marritza guilty? I’d have liked to have seen the episode grapple a little more with this aspect, though it is an impossible point on which to come to a conclusion.  If you work in a charnel-house, even if all you do is routine, innocuous work that does not involve you in killing, beating or torturing others, are you still guilty of their crimes? You have assisted in running the institution, you have helped such things to happen, you have made them easier, perhaps even possible. Can you really shuck off all guilt?

Kira and Marritza represent the opposite poles of this argument. They state their positions but they do not debate, and the next stage of the story overtakes and makes redundant the question without anything more than this brief airing.

What changes things is the arrival of the only known photo of Marritza at Gallitap. This conclusively proves that the prisoner is lying about his identity: he is not Aamon Marritza, but rather Gul Darh’eel, the camp commander, the Butcher of Gallitap.

Once the prisoner is outed, his attitude changes completely. He boasts of his role, glorifies in the slaughter he supervised, proclaims himself a hero of Cardassia. To him, the Bajorans are as nothing, useless, spineless, fit only to be ground under and exterminated. They are not even an indirect threat to the Cardassians, merely a planet of resources that the Empire wanted, and was ‘defending’ itself by taking in such a brutal, inhuman manner.

He becomes the voice of fascism, self-righteous and contemptuous, shouting Major Kira down. The echo of Nazism is blatant, as is the blatant attempt to lower Kira and the Bajorans to their own level, because they too killed civilians.

It’s ugly and angry, and Kira is almost overwhelmed by Gul Darh’eel’s arrogance. But during his rant, he lets slip reference to her and her membership of the resistance band that liberated the camp. Kira is too emotionally involved, but it is Odo who queries this bit of detail that Darh’eel should not know.

Sisko successfully pressurises Gul Dukat to release Darh’eel’s records, which confirm two rather significant facts. First, that Darh’eel was on Cardassia, accepting an award, the day of the accident, so couldn’t have contracted Kalla-Nohra. The second is that he’s been dead for six years, and Gul Dukat attended his funeral.

All it takes is for Doctor Bashir to confirm, from the prisoner’s medical records, that he has been taking medical supplements to to support cosmetic derma-surgery five years ago. And records demonstrate that the prisoner deliberately took a ship that would take him to DS9, where he had already determined that Major Kira was stationed… The prisoner is, and always has been, exactly what he claimed at the outset: Aamon Marritza.

By now thoroughly puzzled, Kira interrogates Marritza one last time, confronting him with the truth. At first, Marritza blusters, tries to continue his bluff. He rants and raves about the greatness of Darh’eel, about how his regret was only that he left any Bajorans at all alive, but when he turns on Marritza, dubbing him a nothing, a weakling, a coward who couldn’t bear the sreams and cowered under his bunk trying to shut them out, he breaks down, sobbing, sobbing with memories, with self-hatred at having done and been able to do nothing to save them, and at the collapse of his plan.

Marritza had turned himself into Darh’eel in order to be captured, to be tried and executed. He had planned to create a great show trial, to have Cardassia humiliated before the eyes of the Quadrant, as the only way to force change upon the Empire, to take on himself responsibility that was never his responsibility to bear.

Kira is bemused, but her understanding of Marritza’s position, and her respect for his intentions breaks through her instinctive hatred of Cardassians. She releases him, respecting him more than ever before. She intends to see him return to his life. Cardassia needs people who see as he does. It will be slower that way.

But it will be even slower. A Bajoran drunk, full of the kind of hatred for Cardassians that Kira has held until this moment, jumps out at Marritza, stabbing him in the back and killing him. The shocked Kira asks why: the drunk speaks of his hate and that’s enough. No, she says, no, it’s not.

In it’s Kira-centric story, the episode reminded me most strongly of “Progress”, for episodes earlier, which I slated. That was also a two-hander, but whereas Brian Keith failed to impress me in the slightest, with a hollow, folksy performance, Harris Yulin, despite looking physically similar in age and body, and using some of the same tactics, was extraordinarily good, and it wasn’t just the far better, far stronger writing.

The story was also stronger for its intelligent borrowing of Robert Shaw’s The Man in the Glass Booth, in which the same basic situation was presented in its more direct form, as a Jewish Camp Survivor kidnapped to Israel to face trial as a Commandant from the same camp, who has engineered the trial by falsifying records to throw suspicion on himself. I only know the story through its Wikipedia entry (and a throwaway paragraph in one of Clive James’ compilations of his Observer television columns, so I don’t know how far the parallel extends, nor how apposite Shaw’s character’s plans, but I do know that the basic idea was beautifully and fully-effectively rendered here.

Overall, a true success, made possible only by this being a ‘bottle’ episode.