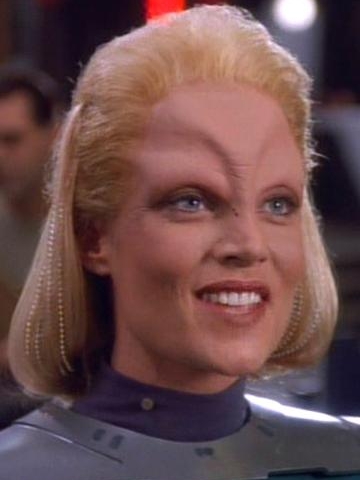 ‘Melora’ was a complete change of pace from everything that had come before on Deep Space Nine, a genuinely sweet and personal story that was almost completely successful. Where it felt short was primarily in the need to provide action, drama, a crisis, when no such thing was needed, and which took up time that would have been better devoted to the primary story.

For the first time in season 2, we were back to parallel plots, an overstory and an understory that didn’t meet until the closing stages and which would have been better kept apart entirely.

The overstory began in the open, which was, unusually but effectively, begun by Doctor Bashir’s Medical Log, giving us an unobtrusive exposition dump on Ensign Melora Pazlar, the first Elaysian Spacefleet Officer, assigned to DS9 to carry out a Gamma  Quadrant survey. Melora (an attractive blonde splendidly played by Daphne Ashbrook, Paul McGann’s companion in the Doctor Who telemovie) comes from a low-gravity planet: the Doctor and the Chief are making modifications to enable her to exist comfortably, or as comfortably as possible, at human-level gravity.

Melora, we are impressed in advance, is a very determined young woman who, beyond the obvious necessities to adapt to her circumstances, refuses any ‘special consideration’. The obvious necessities, when we meet her, are a cane and metal exo-skeleton, an electric wheelchair, ramps, a gravity-manipulator in her quarters, and a very prickly, highly-defensive attitude towards everyone who so much as looks like they’re going to offer help.

I was in too minds about what to expect at this point. Melora was clearly very competent, but the use of the wheelchair planted her firmly in the disabled category, a point she herself made quite fiercely, if not in so many words. She was only speaking a truism when stating that people see the chair.

That led me to anticipate what, on reflection, might have been a fairly cliched and patronising disabled-character-proves-themselves-as-good-as-the-next-hot blonde. Instead, given that this is five centuries ahead and that attitudes towards disability have hopefully been eradicated in the future (notwithstanding the current bastard Tory right wing scum attempt to try to demonise and destroy them), this aspect didn’t feature.

What we got was a much-needed highlighting of Julian Bashir, who refused to allow Melora to employ her pro-active, hyper-defensive barriers against everyone. With calm graciousness, and a degree of reserved amusement entirely appropriate to what he was doing, Julian analysed Melora’s pre-emptive attitudes, opening her up to a willingness to accept that she did not have to fear being under-estimated.

Though she had worked long and hard at being independent, Julian was able to show her that in space everyone is dependent upon one another, and that it is that  essential atmosphere of trust and inter-reliance that made it safe for her to lower her barriers and depend.

And the beauty of it was that, whilst it wasn’t too long before the pair were snogging each other’s faces off in zero gravity, there was no creepiness in it, no sense that the Doctor was doing this to get into her exo-skeletoned knickers rather than assisting someone to become more accepting.

The episode did rather gloss over the discrepancy between the pair’s ranks, which I’m sure would have been an issue in any military organisation. Indeed, Melora immediately started girl-talk with Dax about Spacefleet Romance and whether it ever works (there was a case, 150 years ago, Dax replied) and there was no hint that removal of exo-skeletoned knickers might be frowned upon in quarters not belonging to the good Doctor.

Who then went on to research possibilities of rearranging Melora’s physiology to enable her to walk, and fully-function in human gravity. Adapting a forgotten thirty-year old theory to modern techniques, Julian succeeded in pioneering treatments that strengthened the brain’s control of the body and enabling Melora to start to walk freely.

It would make medical history, but when Melora began to show doubts about the prospects, given that it would, when completed, be permanent and debar her from ever returning to her home planet and family, Julian demonstrated the depths of his sensitivity and sincerity by instantly deferring to her wishes, without the slightest hint of disappointment at the effects on his medical innovations.

This really was a good episode for the much-neglected Bashir.

Unfortunately, we still have the understory to deal with, even though it was being given considerably less airtime. Indeed, it was introduced out of nowhere, immediately after the credits, in a disorienting manner. It was stupidly crude. Eight years ago, Quark ratted on a fellow crook, Fallit Kot. Now he’s out of prison and has come to DS9 to kill Quark.

That it was a dumb idea was made manifest in the villain. Fallit Kot (even the name is stupid) was made-up as an alien whose nose curved down to plug into his chin, creating a pier of flesh crossing the mouth, into which food could be inserted by awkward pushing in from the side but to which drink could only be supplied by a straw or a very thin bottleneck. Sensibly, no such scene was written.

Where this plugged into the overstory was that Quark tried to bribe Fallit Kot to save his life, the plonker betrayed him and kidnapped Dax and Melora as hostages in a runabout, running off to the Gamma quadrant with Sisko, Julian and the Chief in hot pursuit. To show he’s serious, he shoots Melora with a phaser, set to kill.

But, for no adequately explained reason (save some vague musing that it might be a side-effect of Julian’s treatments), Melora survives, wakes up unnoticed, by all except Dax, struggles and strains and shuts off the runabout gravity, whereupon she absolutely ‘taters Kot.

All of which, in a very unsatisfactory and underexplored manner, fuels her decision to abandon the treatment and stay Elaysian. The episode ended somewhat weakly with Melora about to move on to her next assignment, leaving behind a Julian that seemed far less romantically inclined towards the fair Ensign than he’d been when she’d been an interesting patient.

It was an ending that cast a shadow over his previous sensitivity and which re-awoke the moral question of the Doctor snogging his patient.

Nevertheless, if the demands of serial adventure fiction can be successfully ignore, this was an overall excellent episode, giving some much-needed time to the underused Doctor Bashir. Twenty years later, I think it would have ended up being an even better story, because network TV in America has grown to a point where it has far more confidence about playing change-of-pace stories, enough to let Melora’s tale stand alone.

And there is a greater willingness to go into greater depth, confident that the viewer will understand and follow, that would have made this episode broader and more full. I’ve already detected a tendency in DS9, which I hope the series grows out of, to base episodes on serious and complex issues and then fudge their way out of the ending.

As they did with this otherwise lovely story.