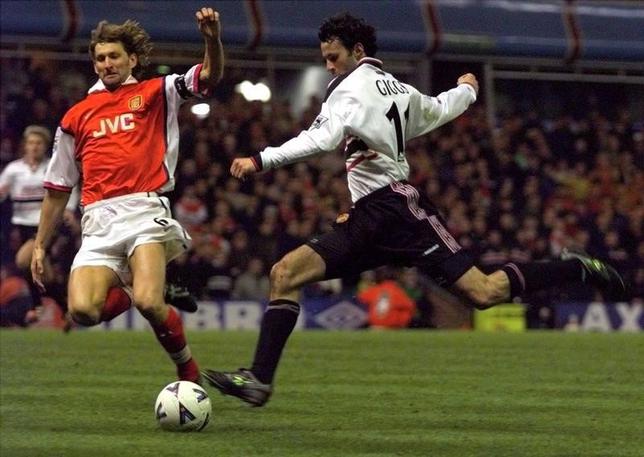 So it’s confirmed then, and the surprise is minimal. Ryan Giggs is to leave Manchester United after twenty-nine years, presumably for the crime of being more loyal to Manchester United than he ever could have been to Jose Mourinho.

Others will say, have already begun to say all the things I would say if I were to wax lyrical about Ryan Giggs, the man who played for United more often than anyone else did or ever will. Like all of us who watched those years, we have our indelible store of all the things he did for us, and though each of us would produce a different top 10 of Great Giggsy Moments, we would none of us contradict anyone who said that something not on our personal list was Great.

Two things stand out in my personal lexicon, one obscure, one legendary: legendary from the moment it happened. The first I saw in the flesh, only once, the second on TV, where I have seen it replayed what feels like a million times and yet it thrills me a million and one times as soon as that clip starts with the ball at someone else’s feet.

The first took place on Boxing Day, 1997, in Nottingham, away to Forest. It was a cold, crisp day and I drove down early, had food and drink in the City Centre, walked down to Trent Bridge and took my seat, in which, like the rest of the United fans, I proceeded to stand for ninety minutes.

The pitch was frosty and hard, the bounce high. United scored twice in each half for a comfortable 4-0 win and I drove home content. But in the second half, as United defended the far end, Peter Schmeical launched a clearance so high that,when it came down, it was coming down vertically.

Giggsy was under it. On a pitch that hard, the bounce would have been a good twenty feet in the air. He trapped it under his left foot. Trapped it stone dead, under his control, all kinetic energy drained in an instant. Incredible. I’m sure it happened, sure that I saw it, but if it did happen, it wasn’t deemed worthy of inclusion in the Match of the Day highlights, nor any footage to have escaped onto YouTube.

And the other one was THAT one. You know which one I mean, that one against Arsenal. The last goal ever scored in a semi-final replay, the polled greatest FA Cup goal Ever. Extra-time, United down to ten men, Patrick Viera slides that weak, tired ball across the pitch and Giggsy – on as a substitute and, what everybody forgets, having played utter shite from the moment he stepped onto the turf – runs himself into immortality over the next ten seconds.

I watched the game at my Uncle’s house: he had Sky, I didn’t. A couple of months before, he’d had a heart attack. Loud noises were bad for him. So I’m on my knees in awe and disbelief and shock and roaring triumph and doing all of this in total silence, which is not an easy thing to achieve.

In between those two moments, and before them, and after, there were more moments than I can count. Twenty-nine years is a long time to spend at one employer’s in this era, let alone in football, where ephemerality is the name of the game. What he does, where he goes, the path behind him can never be erased. He walked that for us, indeed he flew along it on feet of genius. I never saw George, but I saw Ryan, and I do not even need to close my eyes to see him again, ‘a young boy running down the wing, with the wind in his hair.’