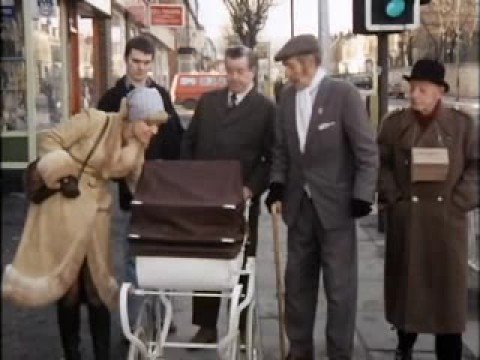 I’ve been looking forward to the third series of Peter Tinniswood’s situation comedy version of the Brandon family, because I remember it being based firmly on the novel from which the sitcom’s title is taken. Uncle Mort being told he’s got a fatal disease and being considerably cheered by it, Carter and Mr Brandon being unemployed and the latter turning into a full-blown housewife and Pat getting a job and falling under the spell of Mr Leatherbarrow, Young Executive (Not Macclesfield, as in the novel: that name had already been spoken for in series 2).

And I was right: this was the best of the four series, even if it couldn’t quite sustain seven episodes, with the final one being more sentimental for (northern) times past than as outright funny as most of he episodes until then.

One thing that was immediately notable was how much more the series used location filming and, in those sequences especially, how much more visual the humour came. Robin Bailey in particular had a glorious time hamming up Uncle Mort’s expressions and movements, and there were several  examples of outdoor scenes that served no more purpose than to let the male side of the cast horse it up in a gentle manner that hazed the humour over into a teasing surreality.

Perhaps the perfect example of how this new approach was handled came at the start of episode 2, which began with Carter Brandon walking down the back lane that lead to Uncle Mort’s allotments: at first, he’s slouching along on his own but then he stops, checks carefully that he is unobserved and then, with a silly grin and a word almost of self-apology, dances down the lane like Morecambe & Wise saying goodnight over the final credits.

But there were location scenes in profusion, almost to the point where more screen-time took place on the allotments, or outside the boozer, or in the street. It wasn’t always silent: Linda Preston (Dierdre Costello having the time of her short-skirted, cleavaged life) is now a cheerfully-unwed mother, moving in next door to the Brandons, which led to an hilarious scene in which everyone examines her baby, and pronounce it the ugliest baby ever!

The majority of the series took its cue from the book, Uncle Mort’s disease (which is no disease after all but pollution from his ‘spring’ on his allotment) and the range of bizarre responses from everybody around. The sitcom can’t encompass the whole of the novel, and especially not the darker aspects, but Tinniswood crams in jokes and lines that I greeted with roaring recognition (though I regret me didn’t see fit to include the wasting disease gag, even whilst he mentioned Uncle Gladwin).

The Peewit Patrol did sneak in in greatly revised form, converted to the 5th International Sea Scouts, Inland Waterways, which in practice turned out to be Sik Skelhorn (Ray Dunbobbin replaced by Bobby Pattinson) and Louis St John in long shorts. Once again, several of the jokes around Louis would not be written in the modern era, but Paul Barber again played the character very broadly, switching from cod-massa’ to gentle Barnsley with an easy fluency that took the sting out of the thoughtlessness.

A lot of the humour did rely on stereotyping male and female roles, which we were inverted to very funny effect. Mr Brandon’s unemployed and has taken over the household, whilst Mrs Brandon goes out to work and does nothing around the house unless nagged into it. John Comer throws himself into this with gusto and makes the most out of what might, in a lesser player’s hands, be a bit thin.

But then everyone’s performing on all cylinders here, thoroughly cognisant in just to what extent their characters are broadened stereotypes, pushed just over the border into caricature, and playing up to it with just the right amount of knowingness. Bert Palmer, as Stavely, has much more to do, though practically every line is either  ‘I heard that! Pardon?’ or some variation of it, and the range and variety he brings to his dialogue is wonderful to observe.

Nevertheless, I can sense you waiting for my comments on the great cast change, with new actors playing Carter and Pat Brandon after Stephen Rea and Anita Carey left, for reasons of which I know not.

Last time out, I said that their replacements, Keith Drinkel and Liz Goulding, were not their equals as actors, but that they better fit the roles of Carter and Pat as I imagined them from the book. I’m still of that opinion in respect of Drinkel. Rea, to me, was just too laid-back in his performance, and his accent had a little too much of the Liverpudlian to sit quite right. Nor did his curly hair fit my vision of Carter.

Drinkel, with a squarer face, straight, short black hair, and a more solidly northern accent in keeping with the rest of his family, still comes over as more what I ‘see’ when I read. He plays Carter with a little more forcefulness, a little more demonstrativeness. His range may be narrower, but so too is Carter, and his solidity fits in well with the others.

Liz Goulding is hampered by having a less emotionally-stretched part in this series. She’s still the outsider among the Brandons in her determination to better Carter whether he likes it or not, but despite his not demonstrating his passion for her like he used to because she’s working and he’s not, she isn’t given any insecurity to work with. Pat#’s on course, and she’s loving it, and she’s sailing along undisturbed. Goulding is given a much more superficial part in this series and it’s unfair to compare her to Carey on this evidence.

She chooses to pick up a lot of how Anita Carey played Pat, especially vocally, and Goulding’s voice is how I hear Pat, no question.

Pat’s actually at the centre of the series’ one big inconsistency, which is that, initially, Carter and Pat aren’t having sex, as in the novel. But this is never gone into beyond the first episode, and midway through the series, there’s a dramatic change of tack as Tinniswood steals a story from Except You’re a Bird, and has Pat announce she’s pregnant.

Sadly, as I said, the series did rather tail off in its final episode. Mort’s curability comes out in episode 6, but no-one has the heart to spoil his pleasure and tell him, and in the end the issue of Pat’s pregnancy, and her wholly imaginative response to it, drifts into the background and everything winds up with Uncle Mort feeling well enough to join the others on his post-funeral treat for them, at a Tram museum. The comedy gets overwhelmed by some very Tinniswodian nostalgia for old working class days, until Mort’s finally told he’s going to live, and gets turned down for the Last Tram because it’s full.

He’s promptly run over by the next after the Last Tram, but survives that intact,  allowing him to use the novel’s brilliant last line, albeit in a completely different context.

Despite the weak ending, series 3 was very funny, and the best representation of the Brandon’s world outside the novels. It was filmed and broadcast in 1978, and I watched it miles away from home, from the north I counted myself of, the north of the series that I persisted in forcing into a Manchester setting, in the BBC lounge of the place I lived in Nottingham, among people who, for the most part, didn’t get it at all.

The same would go for the fourth and final series.