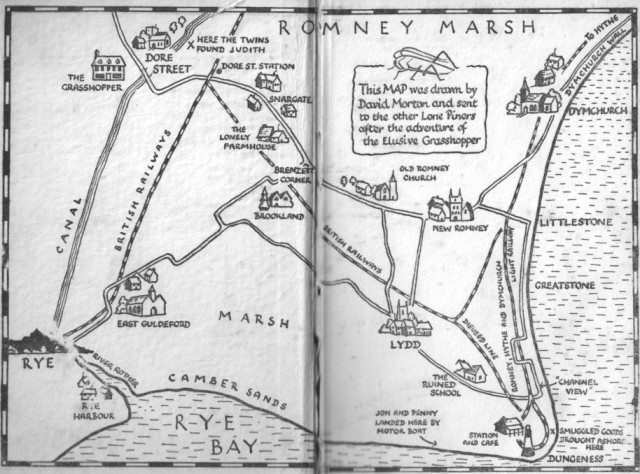 So enter the Mortons, who accept Arlette as a kind of auxiliary member immediately. She clearly likes David – it is probably a very good job Peter has stayed behind – but when forces are divided to try to track down Ballinger and Grandon, she goes to Hythe with Penny, David with Jon, and the Twins on their bikes to look at the nearest villages.
The Twins are still very much the Twins. There is nothing so outrageous as their kidnapping of Percy, but they are full of their belief that they are the be-all and end-all of the Club, that only their ideas count, and that the seniors are deliberately excluding them. It’s a recipe for the inevitable trouble.
Wilson, meanwhile, has spotted a swimmer coming ashore with what will prove to be watches, smuggled into the country to avoid Purchase Tax. Unfortunately, he has also been seen and is ambushed and knocked out, requiring Jon and David to rescue him. And just as Wilson is proposing to take what he’s got to the Police, the Police approach him.
Once again, the adults are moving in, but the Twins are still out there on the loose and, needless to say, it is they who get the lead on Ballinger, thanks to the mistreatment of a maid who has run away after being beaten. Between Judith, who describes two very familiar women, and an elderly lady leaving her only home, the Twins are able to track Ballinger and her ‘niece’ Valerie to a house-cum-shop called the ‘Grasshopper’. There, Ballinger is conducting a successful and legitimate business in buying up good quality second hand furniture for sale to Americans, and running her smuggling racket behind the scenes.
Needless to say, and with a stupidity that it’s hard not to condemn, the Twins ignore the fact that they are only ten years old, presume their invincibility despite past experience, and go in and get themselves captured: you’d think David would have leashes made for them, perhaps in tartan to match the one sported by Macbeth.
Once the Police are in on this, there really isn’t any place left for the children, but that is the one taboo in a Lone Pine book. David, with Wilson and Arlette, tracks the Twins to the Grasshopper and rescues them, whilst Jon and Penny, whose adventure this is supposed to be, get left behind unjustifiably. And Penny is busy letting Jon know what she thinks of him for allowing this when the cousins are summoned to the Police. And why? The Warrenders are to be taken on the Police raid to bring in the smuggling gang.
This is one of those points where the adult me parts decisively from the youngster who was thrilled at the adventure and sees it as only what’s due. In the child’s vision of what is right and proper, Saville is acting correctly. Jon and Penny are taken by motorboat along the coast to Dungeness, whilst the main body of coppers arrive in an unmarked, unlit miniature train. This detail tickled young me pink: I have still never seen this railway but was already a devotee of its Lake District equivalent, the Ravenglass & Eskdale Railway.
There’s no earthly reason why the Police might take two teenagers on a raid like this, but it’s painted as a treat and thank you for putting them onto busting a lucrative smuggling ring. This time, Ballinger, Grandon and Valerie are taken into custody, with the Warrenders as witnesses, and we see that Jon and Penny both are too sensitive to gloat: indeed, neither can take pleasure from the ruination of their enemies.
It’s fitting that the story should end with them, and though David and Peter are the couple who, rightfully, are the heart of the Lone Pine series, Saville is generous with his belief in commitment between people who care for each other. There is a brief moment during the raid when Jon, leaping out of the motorboat to help drag it up the shingle, is pulled back by the undertow, and Penny screams. At the very end, Jon asks her why she screamed and Penny, fingering the beads he gave her, takes a long time to answer before claiming it’s a stupid question: ‘a wave must have splashed over my boots’.
There’ll be more to say about this subject in relation to the next book, and Saville cleverly leaves the subject hanging, cutting for the last lines to David asking Arlette how she likes England after these nasty event, and the French girl replying that she likes it ‘ver’ ver’ much.’ A stereotype to the end, Arlette, but a nice one, and decidedly unFrench in her easy adaptation to the Lone Pine way of spending holidays, and it is a shame that Saville never brought her back again.
Apparently, at one point, a story was mooted in which Jon and Penny would take the Mortons on a holiday to France, where they would once again team-up with Arlette, but that never got further than the mooting stage. Given that Saville did take the Jillies abroad once in their six book series, albeit without their constant attendants, Guy and Mark Standing, it would have been at least fair to treat the Lone Piners once in twenty. I can just imagine Jenny Harman’s awe…