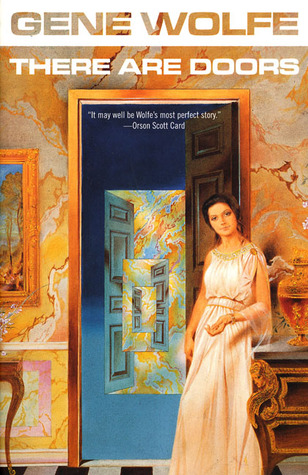 This is a most unusual book from Wolfe, and one I’ve always found difficult to fathom. It’s written in the third person, yet it so closely depicts the headspace of its central character, a man called Green, that it is a typically Wolfean first person unreliable narrator narrative twisted only slightly. It is as subjective an experience as anything by Severian or Latro, except that where those two gentleman’s issues were with memory, There Are Doors complicates itself by having a hero who is a nobody: deliberately so.
The meat of the story is relatively straightforward. We begin with Green enjoying a love affair with Lara Morgan, who has been living with him for a couple of days. Abruptly, she leaves him, leaving behind a cryptic letter of explanation that refers to passing through doors: not necessarily doors as such, but which lead somewhere else, which can only be left by backing out, immediately.
But Green is in love with Lara, and only wants to be reunited with her, in some way, not even necessarily as resumed lovers. He goes through a door and finds himself in a different world, the world Lara comes from, and in which she’s regarded as a goddess.
It’s a familiar world in many ways, perhaps a bit less further advanced, though Green never provides us with enough of a clear picture to decide on how, or even if, these worlds are related. It takes him a long while to understand what is referred to only obliquely for much of the way, which is that the biggest difference between these worlds is that on Lara’s world, men can only have sex once. Something in the act of sex destroys their immune system, and they die within a couple of days.
Is this real? Though by the end of the book, Wolfe appears to confirm this is so, from Lara’s own mouth after many attempts to avoid the truth, I am still unsure. Despite it’s faux-objectivity, this is still Green’s story, out of his head, and we learn fairly quickly that, in his own world, he is a quite recent mental patient, for an undefined period.
The uncertainty is further emphasised by the disjointed, incoherent portrayal we are given of Lara’s world. Green moves from place to place in dream-like fashion, rarely conscious of transitions from place to place. People he encounters keep coming and going, in different roles, with little logic. Green constantly doubts what he is seeing, feeling or experiencing, constantly making up possible explanations for what is happening to him whose common characteristic is only that what he is going through is unreal.
The deliberately flat single name further emphasises that he is a nonentity, without character, perception, ability or understanding. The centre of this book is a void, by design, and the book has to function without a centre. And, no matter how fantastic things become on Lara’s World, Green remains unphased by it, too dull to ever be properly surprised.
After a lengthy sojourn in Lara’s World, he returns to his own world, where he is a salesman. His four to five days there have amounted to just over a month at home. Without ever once convincing as an overly-enlightened and generous employer, the store insist on his not returning to work until he’s got a Doctor’s note confirming he’s fit to do so, and when he winds up back in mental hospital, they blithely cover all his expenses, with an open cheque-book.
Green returns to being a salesman for years, improves his standings, his income, his neighbourhood, but still returns to Lara’s World via his favourite Italian Restaurant, which seems to exist in ‘both’ worlds.
Once back, he prevents the overthrow of the Government by Bill North, a confusing violent character who’s also a Visitor from Green’s world, and who is a figure of outright male violence. This enables him to meet the Goddess Lara both there and here, where she’s supposed to be his Doctor’s secretary, which is how the relationship – somewhat unethically, if true – supposedly began.
But Green has become an analyst, become the figure that many of Wolfe’s central protagonists will become, sorting impressions and facts and constructing theories based upon them, which leads to Lara admitting the ‘truth’. And why has a goddess deigned to have sex with such a nobody as Green? Because, in a moment that shines through as real and authenticated, she wanted to have sex with someone who would not die as a consequence of that act of love-making.
Is this true? Is any of this true? Is this one of Gene Wolfe’s most complex games, existing only in the mind of his deliberately colourless hero, who by definition, if he can create this level of complex system, can be anything but colourless?
I don’t know. Maybe next time I will discover a clue that doesn’t have at least four edges. There Are Doors is not a book to encourage repeated reading because Green is so dull. But it is perhaps built on sand that shifts more than anything we have read so far…