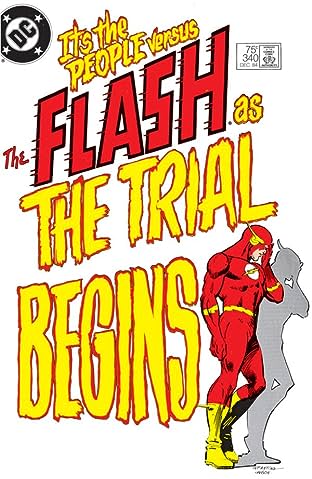 A long time ago, in a Multiverse far, far away, DC Comics put The Flash on trial for Murder.

This was an extended, two-year plus run-in to Crisis on Infinite Earths in which it had been decided that the Barry Allen version of The Flash, the symbol of the Silver Age that was to pass before our eyes, should die. His writer, Cary Bates, set-up a scenario in which the Flash actually did kill one of his Rogues, the Reverse-Flash, albeit unintentionally, and to save a life, and had him put through a lengthy trial, in which he was actually found Guilty.

He then rather spoilt the outcome by having the Guilty verdict be the result of mental domination by one of The Flash’s future foes, leaving the door open for our favourite Speedster to bring this enemy down, and secure a new verdict of Not Guilty.

This all occurred between 1983 and 1985 and, although I did not normally read The Flash in that era, I did pick up the run about six months in and followed it until its semitragic ending.

The current season of The Flash tv show has gone for a change of pace in relation to its Big Bad Villain, eschewing another superhero and going for The Thinker, aka Clifford Devoe, an updated version of a Golden Age villain whose abilities lie in his brilliant mind and comprehensive plotting.

Which, in time for the mid-season finale, involved framing Barry Allen for the murder of… Clifford Devoe.

There have now been four episodes since the series returned after New Year, dealing with the Trial and Incarceration of Barry Allen. I’ve already excoriated the first of these as one of the most stupid episodes of American TV I have ever seen so I’ll not waste any more time on that.

But after two weeks of Barry moping around in prison, and discovering that the Warden has actually proved he’s The Flash, we got the resolution of this latest Trial of The Flash story (to all those getting their Flash fix from a certain major commercial TV company, ‘ware Spoilers).

Barry has been kidnapped into a super-special secret metahuman wing of Iron Heights, known only to crooked Warden Wolf where he is imprisoned along with all four of the new, bus passenger metahumans (don’t ask). Wolf plans to sell them to the annoying Amunet (Katee Sackhoff with a wince-inducing English accent and manner).

Team Flash works to frustrate this, Barry uses his CSI skills to create an acid that breaks everyone one, only to be intercepted in the Yard by Wolf and Amunet, who turns everyone against CSI Allen – aka – The Flash!

Everyone, that is, except Hazard, Becky Sharp, the one with luck-powers. She’s turned over a new leaf in prison, helped by Barry’s encouragement, and she uses her ability to project bad luck onto everyone else, causing multiple deaths throughout, including Wolf but not Amunet (pity).

But then (and now it starts getting complicated or, to use another word, stupid), The Thinker intervenes, to capture all four bus metas, including Becky. Y’see, Devoe’s body is dead, but he’s developed this means of transferring his mind into other people’s bodies, which isn’t half freaking out his lovely (depending on which hairstyle she’s wearing at the time) wife, Marlee. It’s all part of his plan to kidnap the twelve bus metas, seven of whom haven’t yet been identified, and Marlize gets even more freaked when her husband sideslips into Becky and insists on dancing with her to their song (icky!)

Meanwhile. DA Cecile is one day away from conducting Barry Allen’s Appeal, on the grounds of new evidence, of which she has none, not one iota, Vibe and Killer Frost are prepared to break Barry out, but he refuses to leave until he can leave on a legal basis. Is this tedious little sub-story ever going to end?

Well, yes. Ralph (The Elongated Man) Dibny has discovered a new superpower this week: if he concentrates, he can look like anyone he wants. So, just as the Judge is about to gavel the appeal into next week, the courtroom door opens and guess who wheels himself in? Why, it’s Clifford (wink, wink) Devoe, not dead after all, and eager to help clear Barry Allen’s good name.

Remind me again, which section of the US Criminal Code covers impersonating murder victims. So much for Barry Allen’s insistence on only getting out if it’s legal.