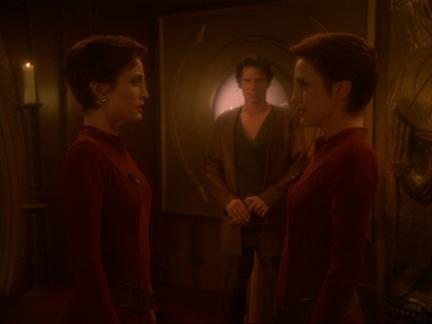 I dunno. On the one hand, I enjoyed this episode well enough whilst watching it, as I always do with Kira-centric episodes on one level or another, but on the other it was pretty bloody predictable at every turn. This one could have been written in any half-decent writer’s sleep.

Basically, this is a Mirror Universe story with a twist, in that it doesn’t take place in the Mirror Universe. It’s Bareil Antos (a final return appearance for Philip Anglim) teleports onto the bridge on DS9, takes Major Kira hostage for a fast ship outta here (he’s on the run, y’see), only for her to whip him like cream because his disruptor’s faulty. Oh, yes, she’s known that from the first but let him push her on foot from the bridge to the launching pad (up 57 levels) for no more reason than… Actually, there’s no reason, except that, well, it’s Bareil.

Anyway, despite Sisko explicitly warning her of how dangerous it is, meeting a Mirror Universe version of someone you loved and who is dead, the Major a) refuses to press charges, b) arranges for Bareil to stay on DS9 and c) starts to get close to him.

At first, naturally, it’s just friendly. This Bareil is no Vedek, he’s a petty, although very skillful, thief. The Major takes him to a Bajoran Shrine, arranges for him to have an Orb Experience.

Of course, in between, she takes him to dinner with Jardzia and Worf (having spent the fluffy part of the open turning down dinner party dates) and, taking him back for coffee, shags him senseless. Then, just when you’re waiting for the other shoe to drop, because there is another shoe, you can practically see it dangling from the ceiling, into the camera’s eye-line, who pops up undetected in Bareil’s quarters but Intendent Kira Nerys.

It’s all a plot, you see (waits for heart to cease pounding at the totally unexpected twist). Bareil is hereto steal the Orb and heave it back to the Mirror Universe where he will become a Bareil, the Intendent will lead a holy crusade against the Alliance and he and Kira will become vastly rich and powerful, like unto Gods. Nope, didn’t see that coming in any  way.

The Major has been completely taken in, that is until the wink is tipped to her by none other than Quark, who can see through Mirror Bareil exactly as you can’t ordinarily see through mirrors. He’s in the Shrine, bypassing the forcefield, she’s got a disruptor on him, and the Intendent, dressed as the Major (two of ’em, in that tight-fitting uniform, it’s like a fantasy. A very cheap and shallow one, mind) has a disruptor on her.

Intendent Kira is all crowing and gloating about how every little thing Bareil has said to Major Kira has been a complete lie, fooled her shamelessly, how humiliating: jealousy is a frightful thing, and it’s even worse when you’re jealous of yourself, really gets at the old insecurities there. Until Bareil stuns her (Intendent Kira). His Orb Experience had shown him a happy family life on Bajor with Major Kira but he rejected that future because (deep dive into Cliche Drawer) he being who he is, he’d only have found a way to screw it up. he then teleports himself and the Intendent, but not the Orb, back to the Mirror Universe, leaving only a close-up on the face of Major Kira and a significant pause.

A lot of people hated this episode, and for good cause. Whatever played this week was always going to be on a hiding to nothing because it was the Press Reset episode, after the six-part Dominion War arc and the Jardzia-Worf marriage, and the showrunners in retrospect think this was an unfortunate choice. Very few people were satisfied with it, including Nana Visitor, who believed that by this time, Kira had gotten over the loss of Bareil (it was almost exactly three seasons ago), and that Kira wouldn’t have jumped into bed with someone she’d barely met so soon.

There’s also the loose writing that makes such a fuss about a transporter build-up immediately prior to Bareil’s arrival on the bridge, whereas the Intendent can slip into and out of DS9 without anyone else being the wiser, which is sloppy.

No, pleasant though it was whilst watching it, this was not an episode Deep Space Nine could be proud of. But two Nana Visitor’s in that uniform…