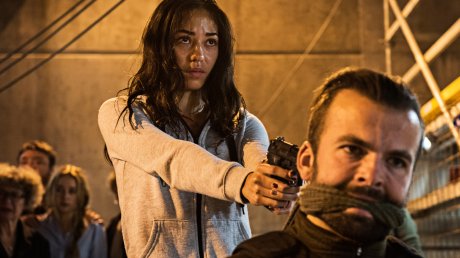 After a week’s interlude to dissipate the effects of a real-life terrorist attack, Below the Surface moved into its back half with another pair of fascinating and taut episodes that set up the final week.

There was a distinct Lost element to both episodes, with pertinent flashbacks for a central character in each. First was Bodil, the elderly woman hostage. Joachin, the tense, uptight guy among the hostage, permanently restless and wanting to strike back, developed a plan to do so. This involved jumping one of the captors, taking his assault rifle and causing trouble for the others.

You were hard pushed to see how that could work, given the imbalance of power, and training, which in the end proved crucial, but Joachin, who succeeded in dragging some of the others into his scheme, got a long way into it.

Basically, he took advantage of Alpha and Brave taking Ricco out for the next interview with Naja Toft, now happily loved up with Jonas the fake, leaving Charlie alone. By pretending to have shit his pants, Joachin got let out of the cage, and used his opportunity to smash Charlie across the back of the head with a handy adjustable spanner.

But this only led to a stand-off: Joachin and one prisoner on one side, Alpha and Bravo with Ricco on the other, guns to eveybody’s head. But it was two guns to one. Fortunately, Philip Norgaard had managed to negotiate his way into the interview at Naja’s end, and talked Joachin down into surrender without bloodshed.

Where does Bodil come into all this? She’s trying to talk Joachin and the rest out of doing this at all, out of upsetting the apple cart, out of risking eeverybody’s life for the frustration of one stupid blowhard who’s reacting more to having his masculinity threatened than to his intelligence. The flashbacks establish her as a lifelong activist, constantly challenging society’s rules. She’s contemptuous of how she failed to communicate this to her daughter, proud that her grandson picks this up – until, that is, he has to run from the Police, and falls through an unconstructed floor, two stories, onto concrete. His mother is contemptuous of an old hippy who was a neglectful and unsupportive mother who can’t see how she has led up to this disaster.

So Bodil tries to keep the peace, prevent disaster developing, individual hurt rising from an unchecked, unthought out attack on superior forces. There’s a cruel aftermath: Joachin has a punishment beating administers, Denise snaps, tries to attack the captors, she is throw off and a gun is fired. The lift brings up another dead hostage: it is Bodil.

In the background, TTF’s attempts to get some kind of handle on the situation continue. Last episode’s cliffhanger, the discovery in the garage, turns out to be a wall of clippings, an obsessive study…of Philip. It’s clearly significant, though the Justice Minister dismisses it as anything but: just studying the opposition chief, nothing personal.

The lovely Louise is sent to negotiate away into Naja’s interview, which she signally fails to do: it’s Philip who achieves this. And there’s where the first clue arises. Naja is still shagging fake Jonas, supposedly Leon’s son. She determinedly asks Ricco to pass on a message to Leon, from his son. But Ricco’s known Leon for fifteen years: he has no son, instead two grown daughters.

Needless to say, Naja keeps this discrepancy to herself rather than immediately tell the Police: well, she’s a Reporter, isn’t she? Which looks likely to get her into trouble, in episode 6, when Jonas turns up for more morning screwing and realises from her sudden lack of enthusiasm that it’s all gone pear-shaped. A quick backhander later and Naja is forced to dress and pack for an extended stay somewhere else, a process that she drags out interminably until TTF, who are tapping her phone and surveilling her, can bust in and take Jonas.

Or Ben Larson, ex-Danish Army, a man whose younger brother was killed in Afghanistan, one of a number of men in elite Platoon K7 caught up in a massive disaster. Jim and Marc held were killed by a grenade. K7’s men underwent heavy trauma, to which they have responded in varying degrees.

The idea that the Danish military may be involved in this is horrific. The crisis has lasted six days now, two hostages are dead, twelve others still captive. The public are getting restive. It mustn’t get out. TTF are getting ever nearer. One of the things I like about this series is that everybody’s competent. There are no mavericks, solving things by breaking the rules, just men and women who know what they’re doing and can be trusted to do so without it undermining Philip in any way. The team of Simon and S.P. have done much of the groundwork, with a total lack of flash, and it’s been so refreshing to watch.

But this is Louise’s episode. We see flashbacks to her at twelve, already reading things into body language, voice inflexions. Her father’s lost his job but won’t admit it to her mother. She saves is life when he tries to commit suicide in the garage, by carbon monoxide.

And she diagnoses, and reports to the Minister, that Philip is lying when he claims not to know anything about K7. And she analyses recordings, and finds a match between Alpha and a member of K7. The revelation of who Alpha really is, that it’s not Ahmad but is equally horrifying, floors Philip. Alpha’s real name is Marc. Marc Held.

Next week is going to be gooooddddd!