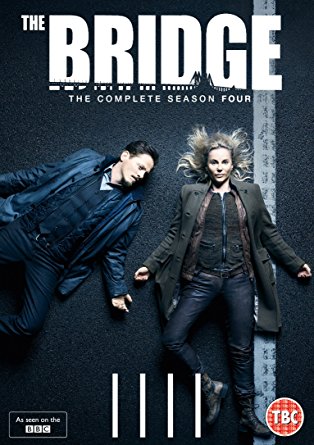 It’s back, at long last, and for the last. The Bridge, or Bron-Broen, has been so successful in Denmark and Sweden that it’s been granted an unprecedented fourth series and, to parallel that popularity, it’s been given an uplift from BBC4 to BBC2, and it’s own time on Friday night, away from the Saturday Eurocrime slot. It’s also been rationed back to one episode per week which, given the cliffhanger at the end of episode 1, is a hellish trick to play on an adoring public, but then again we get eight weeks to play out this story one final time.

Much has been made in advance of the ‘ultra-violent’ start of the series: a woman is buried up to her shoulders underneath the (in)famous Oresund Bridge, and stoned to death. No, it’s not a pleasant thought, and it does buy into the ‘violent crimes against women’ topic, but it’s far from the way it’s been pre-sold, as you might expect. What we see is the buried woman, in a van’s headlights. Then, from a distance, we see a man making a throwing motion and her head jerk. Cut to her bleeding from a split eyebrow, repeat throwing from the same distance after intercutting a hand picking up a stone, and pan left so we see no more. The rest of it is forensics.

There are two more blows to women’s heads, both from behind, later in the episode, neither of which are especially graphic.

The victim is Magrethe Thormod, Director of Immigration in Norway. The detectives are Henrik Sabroe and his new partner, Jonas Maudrup, played by Mikael Birkkjær, who we remember from The Killing 2 and Borgen. Jonas seems to be a decent detective, so far, though he’s not exactly enlightened. Motive, given the rather outre modus operandi, seems likely to be connected to the recent order for deportation of Tariq Sharzi, a gay muslim. There’s nothing simple about this. Homosexuality in Tariq’s home country is punished by stoning to death (a-ha!), but he’s disappeared underground and Margrethe’s staff have been videoed cracking open the bubbly over their victory in sending a man to his death so it’s a bit of a bubbling cauldron, this one. Henrik and Thure start tracing Margrethe’s whereabouts before her abrupt disappearance.

Wait a minute, I can hear you saying, Saga? Saga Noren? Saga the most central and vital character, without whom The Bridge cannot possibly be? What the hell about her?

Well, the frame worked. As she predicted, Saga was convicted of killing her mother and has spent the past two years in prison. Henrik visits her a couple of times a month (Linn the Troll tried to visit too but it never worked out), and they have sex (imagine that being allowed in a British prison, The Sun and the Mail would implode out of sheer fury). He tries to get her to look at the Thormod case but she refuses because she is not police. That’s been taken away from her. It was a very big part of her and Saga has never known how to not be it.

Henrik’s also got something missing. Lilian may have found his missing wife’s remains, but his two children are still out there. It’s eight years now, though. He’d thought Saga might be able to help, but we already know why she didn’t get the chance. Maybe now, he says to his support group, he should stop, accept they they two are very probably dead. But what is he if he’s not their father?

He’s off the drugs, he no longer sees them around the house, he has the Thormod case. And the moment he puts the file into the box the two little girls reappear.

But this is The Bridge, and it wouldn’t be The Bridge without other things going on that, for now, we only know will be connected, we just have no idea how. There’s a pair of twins (and disappointingly it’s just camera-trickery though it looks like actual twin actors), one of whom is a famous TV reporter, the other of whom pretends to be his brother when it can get him laid by beautiful blondes coming on to him in bars. But TV brother is contacted by Red October, a Swedish radical left group who could have ties to the Thormod case (which is why Henrik was at Swedish Police HQ talking with Linn the Troll). They want a meeting. He has Bar Brother back him up. They don’t show. He drops Bar Brother off at home. Someone clonks Bar Brother over the head.

Someone else is getting clonked behind the head, only not so seriously. This is Sofie, a nervous, not unattractive woman in her early-Forties, panicking that seventeen year old son Cristoffer’s photo has appeared on the school website for a couple of hours. This is a fuck-up of major proportions (and may not have been an accident). You see, Sofie is divorced, from Dan, the taxi-driver who was the last to see Margrethe alive, and he’s a violent misogynist, and yes, a couple of hours is enough for him to locate her and terrorise her and find the son who hates him – because his mother has turned him against him, naturally, nothing to do with him being a bastard – forcing Sofia and Cristoffer to have to flee. Yet again.

The kindly school administrator who was responsible for accidentally allowing Cris’s photo to appear online and be tracked is going to assist the unlucky pair to rehome. He’s got the perfect place for them. And they’re the perfect tenants. Especially Cristoffer, who’s malleable…

And there’s Saga. She’s having difficulty with a new inmate, Lucinda Arvec, a cop-killer who’s got her eye on Saga. Saga secures herself 24 blessed hours in solitary by choosing to fight Lucinda’s provocation rather than call a guard, only it’s cut short. Her conviction is overturned, she’s free to go. This upsets the one inmate who’s been trying to befriend Saga all along. Saga walks away. Until someone clonks her over the back of the head. This is a serious clonking, with blood, and collapse. It’s not Lucinda though, it’s the would-be friend. saying ‘I’m Sorry’.

But Saga’s still on the floor of the prisoner corridor, blood pooling under her blonde locks…

Ok. If I could find a sub-titled episode 2, I would be watching that right now instead of blogging. And, speaking of sub-titles, this was a seriously awkward episode to watch because the version I was able to access had them seriously mis-aligned: I was reading the dialogue a full twenty seconds ahead of the actual words being spoken, and you try watching something as complex as The Bridge with your brain operating in two different timezones without getting a massive headache.

But it’s back. For seven more weeks. And this will be the last.