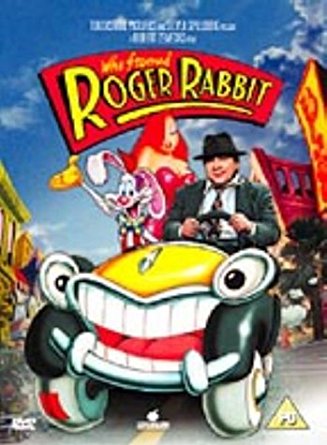 Whenever I watch Who Framed Roger Rabbit? I always remember the words of R. Fiore, reviewing the film for The Comics Journal: “When you see a man walk on water, you don’t complain that he gets his pants cuffs wet.” I also remember going to see the film for the first time, with my girlfriend and her son (the same team that went to watch The Princess Bride) one Sunday morning at the old Odeon in Manchester, one of the last few films I saw on a properly big screen.

There’s a case to say that this is one of those films that is at its best on first viewing, despite the immense level of detail that’s only observable on repeated viewings (for instance: I don’t remember catching a background shot of the Seven Dwarves, pickaxes on shoulders, emerging from a subway station, before today). That’s because the film starts with something that, no matter how pre-warned you have been, you cannot visually comprehend until you see it.

The opening of the film is a cartoon, straightforward, line-drawn cartooning in the classic style. It’s presented as an R. K. Maroon Studio cartoon (nod to Bugs Bunny there), with an introduction loudly echoes the Warner Brothers shorts and a ‘storyline’ firmly built on a Tom and Jerry-esque sequence of domestic disasters. It’s supposed to be the latest in a series pairing Baby Herman and Roger Rabbit, one a baby innocently getting himself into dangerous situations, the other his babysitter, getting serious slapstick punishment saving the baby from danger.

It’s highly reminiscent of the classic style, though it lacks something of the tightness of the works of Chuck Jones or Tex Avery, and the underlying premise (a rabbit for a babysitter?) lacks the logic of the best cartoons (Tom and Jerry, Bugs Bunny and Elmer Fudd, Roadrunner and Coyote).

But this is wet cuffs stuff, because after three minutes of this, a fridge drops on Roger’s head, producing little bluebirds, flying around whistling, and an angry Director yells cut, the scene unfolds into three dimensional live action, Roger gets yelled out because the script called for stars, and if you were any kind of average, everyday person in 1988, your jaw is currently somewhere about the floor and the film has you in the palm of its hand and can do anything with you.  Because you knew the film was about human beings and cartoons interacting with each other, and you might remember Uncle Remus singing “Zip-a-dee-doo-dah” or Gene Kelly dancing with Jerry Mouse, but never before had you seen it done so completely, so comprehensively, so unbelievably real.

After that, you don’t really need a story. Just watching the impossible will do to keep you in your seats for the rest of the film, especially as the film offers several moments that are a vintage cartoon fan’s wet dream, the stuff of which private fantasies are made, because for a golden moment, rights have been acquired that put Mickey Mouse and Bugs Bunny on scree together in the same scene and, more glorious than that and, thrown in early on to blow away any residual resistance, a scene with Daffy Duck and Donald Duck competing in playing pianos (though apparently the original sequence was storyboarded by none other than Chuck Jones himself, who savagely criticised Film Director Robert Zemeckis for ruining it by insisting on directing it himself instead of leaving it to Animation Director Robert Williams).

The story is pretty simple. Embittered and alcoholic Private Eye Eddie Valiant (played to near perfection by Bob Hoskins, whose only failing is that on a couple of occasions his American accent slips) is hired to investigate claims that Jessica Rabbit (voiced by an uncredited Kathleen Turner: boy, that woman could vamp!) is stepping out on Roger with Marvin Acme, the gag king and owner of Toontown, the (un)real estate where the Toons come from. Eddie gets the evidence and Marvin gets a safe dropped on his head. Roger is the prime suspect and turns to Eddie to save him from the frame. Eddie swore off representing Toons after one killed his brother Teddy five years ago but won’t take being played for a patsy. The whole thing is a get rich plot by the soon-to-retire Judge Doom, whose jurisdiction covers Toontown. Freeways are coming and the Judge foresees getting very rich off service industries serving motorists: he plans to wipe Toontown off the map, and the Toons with it, to build the first.

As plots go, it’s simple. It’s an affectionate spoof of a classic film form, without being any deeper than it need be to let us wallow in the idea of a world in which Toons exist side-by-side with us. There are enough references and cameos here to keep a cartoon buff happy for years, whilst providing an equal amount of fun to the less committed audience, who only want to be reminded of the fun they had as kids.

Basically, it’s Disney and Warner Brothers and outside of that there’s not much more. Betty Boop, originated by Fleisher Studios and owned by Harvey Films since 1958, has a scene with Eddie, Tex Avery’s Droopy, created for MGM plays a lift attendant, but Screwy Squirrel (also Avery) only gets a mention and Woody Woodpecker gets an unportrayed and unnamed laugh. And to be honest, the original characters created for the film aren’t up to the level of the ‘performers’ who fill in the spaces: I have to say that, a dozen viewings along, I am finding the hypercrazy Roger and his “p-p-p-p-p-please” a tad irritating. But we’re back at the trouser cuffs again.

Christopher Lloyd as the forbidding Judge is also superb, with his air of cartoon menace overlaid onto genuine human greed and malice. Like Hoskins, he was far from the first choice, and Tim Curry was considered very seriously until Disnet decided he was just too scary (you can certainly see that). They’re the only two principal human roles, with Turner bringing Jessica to admirably subtle OTT life, and Charles Fleisher (sadly, no relation of Max Fleisher) as Roger.

I’m going to take one last trip to the cuffs and echo one aspect of the film that not so much jarred as mildly irritated even when I first watched the film with M*** and D****, and which everybody attributed to the involvement of Steven Spielberg as Executive Producer, and that’s the portrayal of the Toons as creatures that exist to make people laugh, which is not a problem in itself until it’s tied to the quasi-deification of laughter as a cure-all for the world.

But Who Framed Roger Rabbit? simply has too much in it and going for it for these to be anything but quibbles, easily ignorable. From that moment when 2D cartooning becomes 3D like you and me, we are walking on water, and if film special effects are even better yet thirty years later, who cares? And it preserves some of the very last work of Mel Blanc, and is all the more special for that.

And obvious though it may be, the film ends with one Porky Pig, giving us the only possible line on which this can end, and which I’m going to blatantly steal: Th-Th-Th-That’s All, Folks!