The Lion of 6 January 1968 doesn’t represent any kind of revamp or relaunch so far as the contents were concerned, but it did mark the comic’s reversion to just Lion, dispensing with the Champion name, and restoring the lion’s head to the logo.
The boy who placed a regular order with his newsagent to take Lion from the beginning of 1968 would find himself reading the following series: The Spider (5pp), written by Superman co-creator Jerry Siegal and drawn by Reg Bunn; Jungle Jak (2pp); Carson’s Cubs (3pp); Robot Archie (3pp); Barracuda (2pp); Lofty Lightyear (1p); Trelawney’s Mob (2pp); Jinks (1p); Spot the Clue with Zip Nolan (2pp); Texas Jack (6pp but usually 4pp); The Phantom Viking (2pp) and Mowser the Priceless Puss and his enemy James the Butler (1p) on the back cover. Texas Jack and Zip Nolan offered complete stories weekly, the other features were serials. The three one-pagers were all comedies (provided that you stretch the definition of the word to its most elastic in the case of Lofty Lightyear) and Jinks only appeared irregularly. Lion was 44 pages weekly, in black and white with the exception of a poster-style colour cover, and still cost 7d. 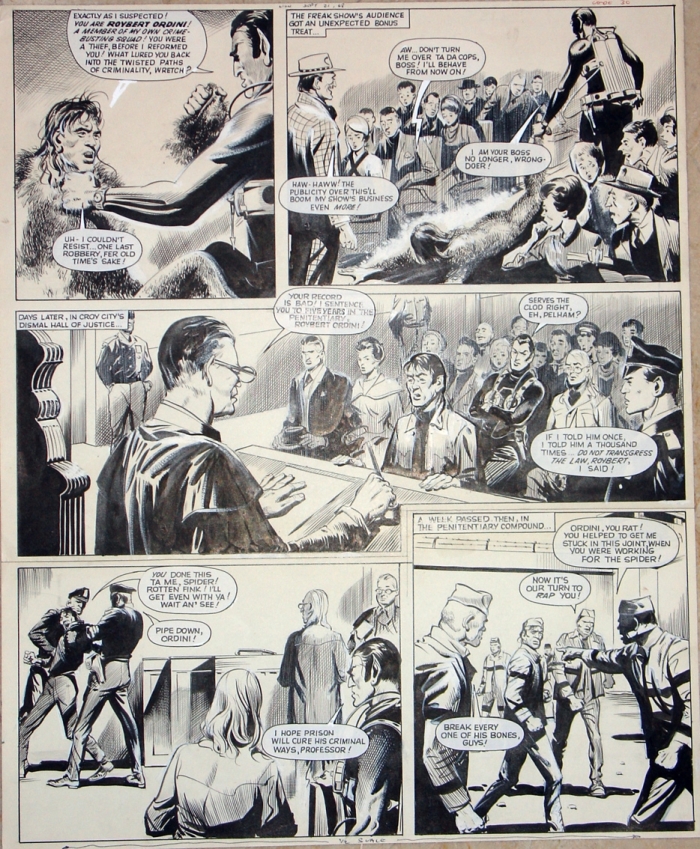 With the exception of Jungle Jak, which had only been introduced in October 1967, this line-up had been running unchanged except for occasional page-lengths, for fifteen months. And the new story was not so new, since it was already swinging on the Tarzan/Lord Greystoke vine.
But the following week, a new series, ‘The Speed Kings’ debuted, starring the King brothers, professional stuntmen, speedsters and, in the case of Sandy, inventors, who were undergoing a series of tests to see if they were good enough to undertake a secret mission for the mysterious Mr Kelsey. It was pretty clear from the get-go that Kelsey had selected Joe and Sandy for their expertise, ingenuity and hare-brained courage, but also because they were too dumb to spot that they were being used. Since they were the stars of the story, it was equally obvious that they weren’t going to be dumb after all.
It looked like Robot Archie was out of the jungle again, and established in England as well. Writer Ted Cowan had ideas to shake up the series even further. With Archie spending more and more time on automatic, and getting boastful with it, Ted and Ken decided to create a duplicate Archie, one who would stay firmly under the control of Ted’s transmitter. Unfortunately, something went wrong, and what emerged was Junior, a schoolboy-sized robot, complete with school cap and shorts inbuilt, and with a stereotypical prankster personality.
Another ‘new’ series, using individual story-titles, started up on 10 February, starring pilot Mike Masters or, as anyone who’d read earlier instalments of this series recognised, ‘Sky-High’ Bannion as he’d been known when these stories first saw print. As with Karl the Viking/Swords of the Seawolves, Lion was cutting costs by pillaging its own past. On the other hand, as these reprints bumped Barracuda out, the comic ended up ahead on points.
The problem was that, in part due to the static line-up, Lion was starting to feel stale. Too many series offering long-familiar formulas, without freshness or invention. Robot Archie had made the effort to change but had done so in a stupid and demeaning fashion. Barracuda had never been any good, The Phantom Viking was as weak as Olaf Larson himself, Texas Jack had long gone past the point of interest. Trelawney’s Mob was a betrayal of the original intention and quality of the series and, in terms of realism, was now closer to the never-ending War Serial of the Fifties. Zip Nolan was deadweight, and all the Spider did was to remind those who knew the identity of the writer how far he had fallen.
The current story when this blog starts saw the Spider battling The Sinister Seven. Before I started this long read, there were characters I remembered, but only one story that, unprompted, I could have recalled, and this was it. The Sinister Seven were a septet of supervillains, organised by the master villain, Limbo, and in order to combat this multiple menace, The Spider joined the Society of Heroes, teaming up with six other crime-fighters: Captain Whiz, Tigro, Rockman, The Snowman, Rex Robot and Mr Gizmo.
What impressed me, and impressed my memory, was that here was a genuine, unalloyed British equivalent to the DC Comics I still favoured, to the Justice League of America, and the Justice Society of America.
That the story is as freewheelingly ramshackle and just plain awful as it is was not what I expected to find. I can’t believe that, as a twelve year old boy, I couldn’t see that this story was not fit to be compared to the stuff from DC, flawed as that was. I think it must have been a case of Dr Johnson’s maxim: It is not done well; but you are surprised to find it done at all.

The next change was another case of Old Home Week, as Rory MacDuff returned on 23 March, by popular demand, with what appeared to be an all-new story that saw Rory and Barney Lomax out of their stuntman jobs when their employers went bust and setting themselves up as professional danger seekers. But as the story unfolded, it became very familiar indeed, revealing itself as another reprint.
A week later, a new one page Cartoon appeared, apparently replacing Lofty Lightyear, who’d gone missing a few weeks earlier. The Lion Lot were a full page multigag schoolkids affair, and Jungle Jak bowed out with a rather precipitous finish one week later, signalling that despite the presence of most of the stalwarts of the 1966/67 run, the monolithic line-up was now seriously beginning to shift.
The Phantom Viking took a week off and returned with a new, and more dynamic artist. Also back on the scene was the lovely Helen Yates, as Olaf Larsen’s officially recognised girlfriend, though without any explanation as to why: I mean, even the Viking thought he was pathetic.
And once Robot Archie had reset Robot Junior to Automatic Good Behaviour, the series took a massive sideways lurch, renaming itself Robot Archie’s Time Machine for the foreseeable future and sending Archie and his human pals hurtling about in time, starting with the 14th Century. At the same time, Trelawney’s Mob was put to bed: had the series run independently, with new characters, it would have been a decently light affair, with consistently good, brisk art, but it didn’t deserve to be mentioned in the same breath as the original, and far better Trelawney of the Guards.

Trelawney’s replacement was yet another overt superhero series, Gadgetman and Gimmick-Kid. It was terrible. Even Barracuda was better than this. The writer had clearly been inspired by nothing better than the Batman TV show: only the first series had ever been shown in Granada but on the evidence of this tripe, the third series must have got to wherever the writer lived. Incredibly, the strip proved very popular, undoubtedly amongst boys whose parents let them watch the TV show but not buy Batman comics, which were never as bad as this, even at the height of Camp.
Meanwhile, all six of the Spider’s allies in the Society of Heroes died, but what was worse, halfway through the 4 May episode, artist Reg Bunn either left or drastically simplified his style, all but completely dropping the elaborate cross-hatching that had distinguished his work since his first commission from Lion. The change in style lasted throughout the final instalment of the story, but Bunn was back to full speed when the next story started.
The same week saw another new two page series, ‘The10,000 Disasters of Dort’, set in the unbelievably distant future of the year 2000, and starring Professor Mike Dauntless, up against a would-be conqueror of Earth. This took the place of The Speed Kings, and offered some crisp, clean art that in no way made up for the basic dullness and unoriginality of the story.
But Joe and Sandy were not gone for good, and by 10 August they were back for a new adventure, displacing the superbly drawn but horribly weak Phantom Viking. Just in time for a drastic change in Lion‘s page count, dropping from 44 to 36 pages. The Spider, Gadgetman, Archie and Dort all dropped a page, but think of what could have been achieved by dropping the long since tedious Texas Jack.
Another new series followed on 28 September, Andy’s Army, a WW2 story about a 14 year old boy, son of a Colonel, who was not only at the front with his father but who sprung three of the biggest villains from the glasshouse (the Army prison) and drove them across the front line into German territory to become his private Army. I begin to wonder if Editorial wasn’t now competing to see what flagrantly stupid idea they could come up with next.
But even bad things come to an end and, far sooner than I feared, Gadgetman and Gimmick-Boy were given their marching papers, to make way for the return, on 2 November 1968, of Paddy Payne, in actual new adventures.
And Paddy Payne wasn’t the only old star to return. Just three weeks later, Captain Condor was back, albeit like Rory MacDuff only in reprints. Three new features debuted the same week, another one page cartoon, Scrapper’s scrapbook, Murphy’s Magic Mauler, another comic Western, about a travelling fighter who was give an Indian belt he thought made him immortal and a serious Western, Trail of Vengeance, whose art made it plain that here was another Fifties reprint.
To make room for all these new features, Texas Jack was finally dropped, whilst The 10,000 Disasters of Dort fizzled out into an extremely weak ending after only ten, to make room for another new series, starting on 30 November, The Day The World Drowned, another disaster series that at first looked like yet another reprint, but which clearly had Ted Kearon art to go with his work on Robot Archie.
And it was change, change and yet more change, with The Mind Stealers debuting in Xmas week, in the 28 December issue, this being a horror story about strange plants that absorbed human beings, turning them into soulless replicas. This was yet another in an increasingly long line of new features with neither personality or inspiration. The story starred two students, Bob and Steve, the latter of whom never once took his hunting cap off, irrespective of where they were: he must have had baaaaad hair.

There hadn’t been a full-scale revamp since 1967, so this was long overdue when this finally happened on 8 March 1969: seven features resetting simultaneously with new stories and one new series, Wyatt Earp, in Gold-Strike in Heather Hills. One look is all that is needed to pin this one down as another cheapie, a Fifties reprint, every bit as ugly and outdated as that implies. With Rory MacDuff and Captain Condor also existing as reprints, Lion was cutting its budget at the expense of its quality.
And Carson’s Cubs took a nose-dive, with Joe and the Cubs decoyed out to Storm Island by an invitation to play an exhibition match coming from a mysterious benefactor. Instead of a football story, here was a haunted house cliché, perverting the idea behind the series.
But this revamp was not well-timed, for another, bigger, most-astonishing revamp was on its way, only eight weeks later, as Lion took over another title. That’s my cue to bring this latest blog to an end, and although there’s still some eight months of 1969 to come, I’ll be treating the next instalment as the first of The Lion in the Seventies.