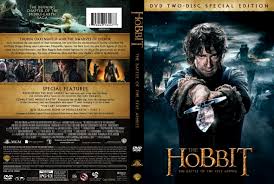 And so it goes.

There’s a greater sense of closure about the end of the third Hobbit film than there is about its equivalent in The Lord of the Rings trilogy, even though technically it’s only the halfway mark. There’s a much stronger feeling of we-shall-not-come-here-again that leaks in from outside where, save the unlikely event of Jackson and Co. signing on to do any kind of adaptation of ‘The Silmarrillion’, we will not be in Middle Earth after this.

Funnily enough, I have little to say about the third film. When I saw it in the cinema, I found it overwhelming, and that was just the theatrical release. I said at the time that whilst it wasn’t the best film I’d ever seen, it was the first one that I would have paid to see a second time on condition they started it immediately.

Though I’m not blind to the film’s major flaw, it is a stunningly visceral experience, throwing itself at you and refusing to let your attention slip for the least moment. It feels at least an hour shorter than it is in reality because, despite the breadth of its scenes, it’s a single-minded film. The sub-title says it all: build-up, battle, aftermath, that is the whole of the film and it benefits from an absence of diversion.

Well, not entirely. The film opens in media res, a direct continuation from the second part’s cliffhanger, and that’s the film’s single biggest awkwardness. In The Lord of the Rings, Jackson greatly offended Christopher Lee by cutting the scene of Saruman’s death from The Return of the King, yet when you see it restored in the Extended Edition, you see that it’s right: the scene belongs in The Two Towers and is an awkward, out-of-place tailpiece shoved in upfront.

The same goes for Smaug’s attack on Lake-town, and his death. The whole sequence takes twelve minutes of this film, and it’s spectacularly done in all respects, but it’s still a holdover. It’s part of The Desolation of Smaug and it should have played out in that film, not this. It’s significant that the title card The Battle of the Five Armies doesn’t come up until that part’s finished.

From then on though, I’m on the ride and there’s no getting off and I’m incapable of analysing things any further. Except to say that, even in comparison to Billy Connolly’s wonderful cameo as Dain Ironfoot, my favourite scene is still the battle of the White Council in Dol Guldur, saving Gandalf, confronting the Nazgul, and banishing Sauron to the East, and to Mordor. And the one reference in all the films to the renegade Valar, Morgoth.

Of course, the old argument still prevails, in respect of which I continue to disrespectfully disagree with those who sneer, and would pose them a question. Three of the Dwarves who set off on this foolish expedition die during the Battle, Fili and Kili, the two youngest Dwarves and Thorin Oakenshield’s nephews, and Thorin himself, King under the Mountain. His line is ended. In the book, all we are told is that Fili and Kili died: how, where, doing what, not a thing. Thorin’s death is given hardly more detail. Given the significance of those deaths, their importance to the story, how would you have wanted a single film faithful to the nature of the book  to have represented them? By thrusting them out of sight as Tolkien did for his audience of children?

To date, I have not seen one person who has slagged The Hobbit off for its ‘elephantiasis’ make any practical suggestion as to how the story might be adapted in the way they think appropriate. And this is without answering the question of how such an adaptation might be made to be consistent with its filmic ‘sequel’?

No, I’ll take my Hobbit the way Peter Jackson served it up and be content, though I remain intrigued by the thought of how Guillermo del Toro would have proceeded had he remained in charge of the film and its original two-part concept. Especially the second film, which would have occupied the sixty year gap between the two books. On day, if I ever get the chance to visit Earth-2, I shall report back to you.