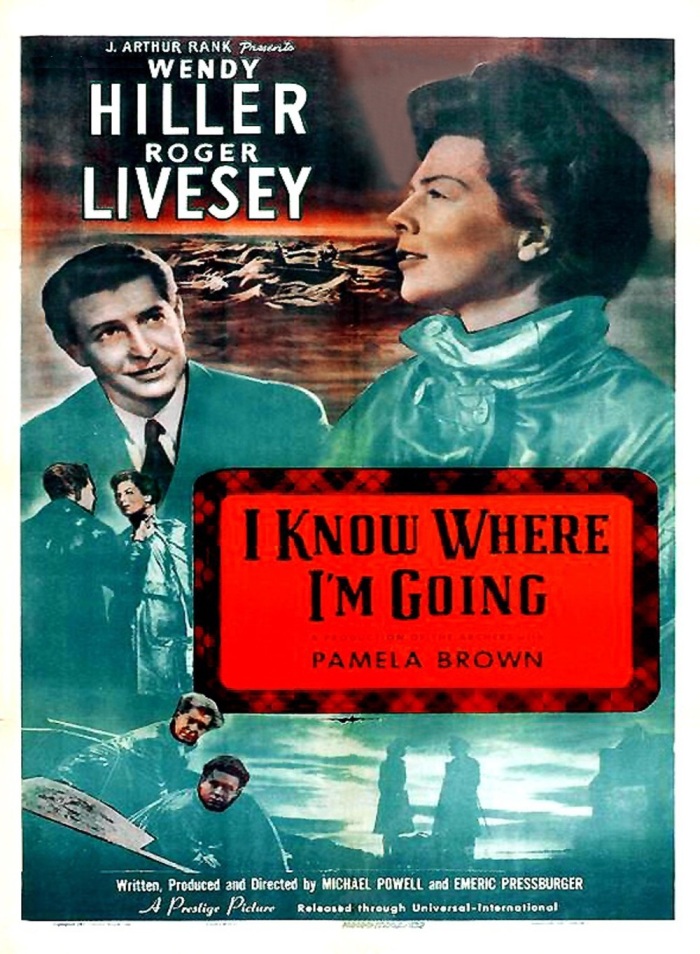 Though you can’t class it amongst the Archers’ major films, I Know Where I’m Going occcupies the highest rung of the second tier. It’s a sweet, fresh, natural romantic comedy that is blessed with wonderful scenery, wonderful cinematography and an underlying seriousness that makes the film a success on every level it attempts.

I Know Where I’m Going takes its name and theme from the renowned Scottish folksong, which is sung over the opening and closing credits. It stars Wendy Hiller and the massively underrated Roger Livesey, though the original casting was to be Deborah Kerr and James Mason. Kerr couldn’t get out of her contract with MGM, opening things up for Hiller (who’d been the original choice for Kerr’s multiple roles in The Life and Death of Colonel Blimp until she became pregnant). Mason dropped out six weeks before filming was due to start, not wishing to travel to the Hebrides for location shooting. Livesey asked to read the part, despite being older than the role and somewhat out of shape: he lost twenty pounds and took the role, despite being committed to a London play which meant that all his scenes had to be filmed at Denham Studios. The use of a double on location is so brilliantly concealed that unless you know in advance, it’s undetectable.

The film was made in 1945, though the War is still active in the story. It further exemplified the Archers’ crusade against materialism begun in A Canterbury Tale and took the place of the intended A Matter of Life and Death, for which there was not sufficient colour film available yet.

The storyline is simple. A series of voice overs introduces to Joan Webster, a forthright and determined young lady with ambitions towards a better life, i.e., one of money and luxury. At the age of 25 she is engaged to marry the substantially older Sir Robert Bellenger, Chairman of Consolidated Chemical Industries, where Joan works. Bellenger is almost as old as Joan’s Bank Manager father, who is less than impressed at her news, not that Joan cares. After all, she knows where she is going.

And that’s the Isle of Kiloran, in the Western Isles, where Bellenger is tenant of the island for the duration. Bellenger is the rich man: he has had a swimming pool built rather than swim in the ocean, buys in salmon from Glasgow rather than take the abundant local stock, and thinks the only people worth knowing in this part of the world are an Englishman and his silly-ass, bridge-obsessed wife. Ths is the life Joan dreams of, and has headed towards all her life.

Joan has an itinerary, taking her from Manchester to the Isle of Mull, where a boat will collect her to take her to Kiloran. But it is here that fate, or nature, intervenes, first in the form of sea-fog, and then a gale lasting seven days, making the last leg of the journey impossible. There’s some blatant symbolism in the wind blowing Joan’s itinerary into the sea at this point, though the moment was far too obvious even in 1945.

Also stranded in another Kiloran-bound traveller, a Naval Lieutenant who we initially know only as Torquil, who arranged for himself and Joan to stay overnight at the House, owned by his childhood friend, Catriona Potts (nee McLaine), played by the lovely Pamela Brown, along with her eccentric tenant, falconer Colonel Barnstaple (Captain C.W.R. Knight). Not until the next day, en route to Tobermory to take up hotel accomodation there (and relieve the strain on Catriona’s underfunded household), do she and we learn that Torquil is MacNeal of Kiloran, the true Laird, as opposed to Bellenger who is only an interloper.

It’s plain that Torquil finds Joan attractive. It’s less plain that Joan finds Torquil attractive, enough so to make her doubly determined to get to Kiloran and remove herself from temptation’s way. Even when she goes to stay with the Robinsons, ‘the only people worth knowing around here’ according to the fruity-voiced Bellenger, who is never seen and only heard this once, they are on their way to play bridge with the elderly Rebecca Crozier, whose houseguest is Torquil.

The underlying theme of the entire film, which is seen at its cleaest in the ensuing ceilidh scene, celebrating the Diamond Wedding anniversary of Mrs Crozier’s head gardener (Mr Campbell’s son, John, is played by a young John Laurie, who also choreographs the ceilidh). It’s a beautiful scene, natural and simple, and Joan is plainly drawn to it, and to the eevident enjoyment of all the participants. But it is Torquil who is at home, and who is accepted amongst the people, notwithstanding his lairdship.

Because Joan’s problem, like that of Bellenger and the foolish Robinsons, is that they don’t belong, and it’s not just being English in the West of Scotland. Colonel Barnstaple belongs, and he’s as English as they come. Bellenger lives with, but above and separate from the people of the area. Joan is seeking a lifestyle that Bellenger’s money can give her, but in knowing where she’s going, she belongs to no place. She is in motion. Torquil, Catriona, Rebecca, the Campbells, Ruairidh Mhor, the boatman, Kenny, his assistant, and Bridie, his daughter who Kenny hopes to marry, they are all in the place that they know and understand. They are part of the land. Catriona puts it best, to Joan at the end, sobered by her ordeal: Joan still sees only money as the measure of life: instead of struggling to maintain their homes, Catriona, Rebecca, Torquil, they could all sell. Catriona is mystified by the thought, cannot understand it. The land is as much a part of them as they are of the land, and they cannot be if this is severed.

Joan has to learn this. She bribes Kenny to take Ruairidh’s boat out, behind his back, when it’s manifestly insane to do so. Torquil, unable to talk her out of her stupidity, her rootless arrogance to think that she knows better, washes his hands of her, until Catriona points outwhat he’s not yet seen for himself, that Joan is running away, not towards, and she isrunning from Torquil.

So MacNeal of Kiloran goes on the boat, and well that he didd. High winds, high seas, storms, a soaked engine, Joan’s wedding dress going into the sea and the risk of drowning in the whirlpool Corryvrecken. But Torquil gets the engine working again in time, and all are saved.

A beautiful day dawns, but too late for Torquil. His leave is over, without reaching the island, and the boat is coming for Joan. He asks her to have her pipers play a particular song. She asks him to kiss her, which he does, with great enthusiasm. Then they part.

Torquil’s path takes him past Moy Castle. Like at least three generations before him, Torquil has not set foot in Moy Castle, ever. A curse was laid, by a long-ago Catriona MacLean, forced into marriage to MacNeal of Kiloran, felling to her lover of Moy Castle. Kiloran beseiged and took the cattle, and bound the lovers in chains, to stand upon a rock in the deep pool below the banqueting hall, until their fatigue pulled them both down to drown. Torquil knows of the curse, and now he enters Moy, climbing to its battlements. He will never leave a free man. But Torquil is not free, not now or ever again..

And we hear pipes, playing a particular song, pipers advancing on Moy Castle, with Joan marching behind, all set to abandon where she has been going because she has arrived where she wants to be, with Torquil, in this life she has begun to understand. The curse has struck: MacNeal of Kiloran shall be chained to a woman until the end of his days.

It’s a beautiful story, and a dream of a script, written by Emeric Pressburger in only four days. No, it’s not a major film, not like The Life and Death of Colonel Blimp, A Matter of Life and Death, The Red Shoes or Black Narcissus, but the view from here to there is not so great or so high, and the film’s setting in Scotland, and its sense of place and eternity gives the story a sense of shape that a mere romantic comedy could not have on its own. Sunday morinings are made for magic like this.