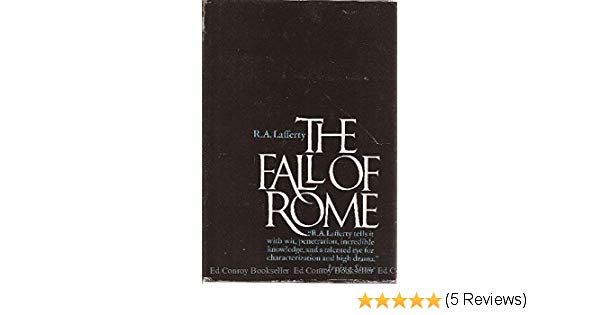 The Fall of Rome was published in 1971, but differently titled as Alaric: or The Day the World Ended when it was reprinted in 1993. Once upon a time, I bought this book and I owned it for quite a long time before I was willing to let myself read it. This was because I believed this to be the last R.A. Lafferty book I could and would read: as long as I held onto it, unopened, there was something left to discover.
In this I was wrong. I found a way to afford those tiny circulation chapbooks, one of which will be in this series, and there are still a tiny handful of stories left, and now the faint but actually realisable prospect that some, or maybe all of that unpublished wealth of short stories and novels might someday be available. Of course, the first of these should be the third and fourth Coscuin Chronicle books, but really I’ll take anything.
The first question to ask is, is The Fall of Rome fiction or history? I don’t have the historical expertise to pronounce upon the historical accuracy, or otherwise, of the account, but most locatable reviews, including those rare ones that are unfavourable, seem to treat it as true, if selective. And a look at the Wikipedia entries for some of the major figures, after re-reading the book, accord with the events portrayed within, insofar as battle and politics go.
But this is R A Lafferty and he does not have a completely separate style for non-Fiction, and thus the book is told as a story, and in the grand Lafferty manner, from the equivalent of a Dramatis Personae which begins the book, and which includes such descriptions of the players as: THEODOSIUS THE EMPEROR, the last who can be called ‘Great’ without laughing; SIR ICIUS, the Pope who did nothing; INNOCENT, the Pope who did next to nothing, and ARBOGAST, Count of the Franks, who had the world in his hands, and dropped it.
Clearly, this book isn’t going to be without fresh, forthright and not necessarily respectful opinions.
What Lafferty is depicting is the fall of the Western Roman Empire, which had already ended by dividing itself into Western and Eastern portions, and which in terms of its formal existence would continue some fifty years after its ending in this account, but which ended on its sack by the Goths under their King, Alaric. And Lafferty makes it clear in his terms, as always defined by his deep and ancient Catholicism, that it is Rome as Mundus, as the civilised world, of which he speaks.
The Fall of Rome moves swiftly from place to place and from person to person, of whom the two most major are Alaric the Goth, who was also Roman until almost the last, and Stilicho, the German who was Roman and nothing else, and who was Master General under the Emperor and the most competent man of these accounts, who until he was betrayed and executed, was the Master over Alaric, the Boy Giant. But Lafferty is also keen to define the Goths, more even that the Romans, in terms that will surprise we whose historical outline places them as barbarians, whereas, if we accept what we are here told, were far from it, and were in many ways more civilised than the Romans themselves, whoever they may be.
The book is dense as to both person and place, and without a prior knowledge of the times and the movers, it can be difficult to follow. Lafferty’s history is at one and the same time both more abstruse and more personal, attending to the thoughts and intentions and emotions of those in this expansive game, be they people or races. He is alive to the unreliability, and often paucity of the evidence that has come down to us, and not afraid to admit that a story may be defined but that what defines it remains unrevealed.
Nor is he afraid to give a confident judgement between contradictory accounts, choosing among probabilities and psychic commitments. And he is sweeping, yet thoroughly believable, in what on one level is a single-handed but massive attempt to rehabilitate the Goths from the false image the makers of history have placed upon them for their own ends.
There is no simple analysis of this book. Within what can be known, Lafferty treats the truth as his priority, but also halts the narrative drive to frequently observe things in the round, and to introduce moments where the inevitability of the history we see might, by a simple choice to do or not to do something might have led to a history far from what shaped the world in which we now live.
So The World Ended. According to a later series of lectures given by Lafferty, it does this over and again, though not perhaps at intervals to be known. But the Fall of Rome, and the precipitating of the Dark Ages that followed, during which history seems to stand still, its movements unseen and unfelt in its night of unreason, is the biggest of all of these, and the one that Lafferty presents as a many-sided thing, the understanding of which is heavy and important.

4 thoughts on “The Man Who Wrote Lafferties: The Fall of Rome”