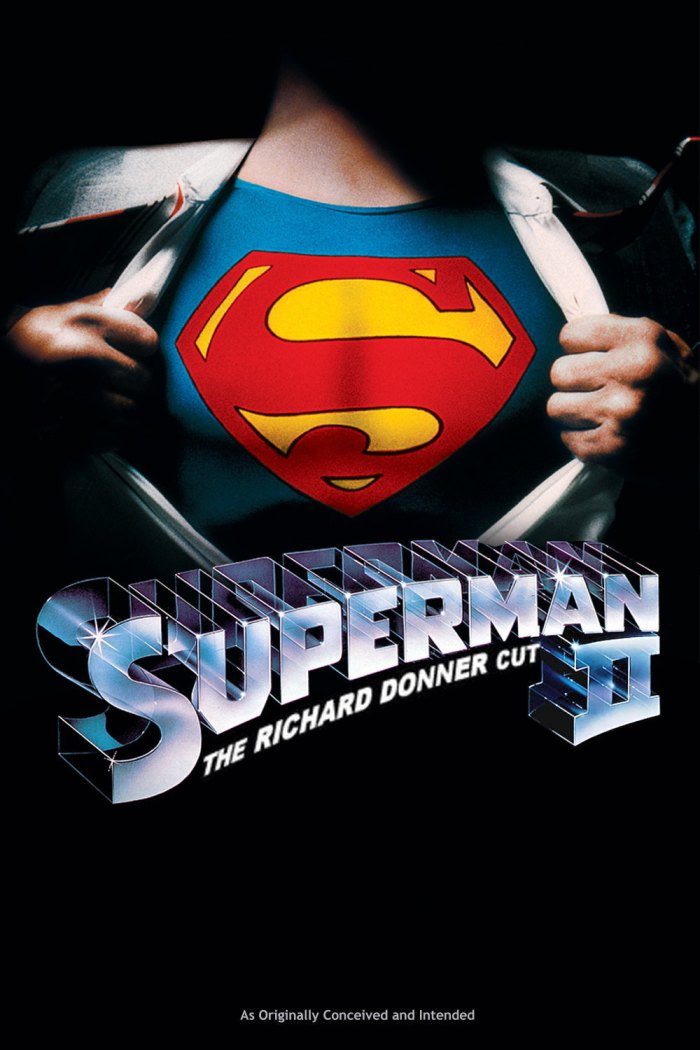 I’ve saved this film as the last film from the last boxset because it’s a unique example in my collection. Back in July, I reviewed the commercial release of this film, as directed by Richard Lester, giving a fairly negative response to a film I’d loved on release, and always held in high regard for the fun entertainment it was. Forty years on, I found a lot of this wrong with it.

But Superman II appeared under unusual circumstances. It was meant to be directed by Richard Donner, who’d been responsible for Superman – The Movie. Indeed, the two films were to be shot together and footage for about 75% of Superman 2 had been completed before there was a falling out between Donner and Producers Alexander and Ilya Salkind. Donner was replaced by Richard Lester, who’d pioneered the two-at-once technique of The Three Musketeers/The Four Musketeers, who, in order to claim Director status on Superman II, reshot a substantial number of scenes already shot by Donner.

But the two Directors had radically different approaches to superman, with Donner moved by the mythic aspects of the character and his well-established and Lester unable to take the character seriously, betraying, to my eyes, a fear of being thought of as taking comic books seriously. Lester undercut and undermined any serious elements in the film with almost rabid eagerness, along the way mangling the plot so as to remove any plausible explanations.

Fans of the first film, aware of the existence of the Donner scenes, consistently pushed for a Donner Cut, for long enough that when, in the 2000s, a vault of unused footage, long thought destroyed, was discovered, the notion became a physical possibility, and the longstanding enthusiasm demonstrated a commercial interest. So the Donner Cut was assembled, and we got our chance after all.

One crucial scene had never been shot, except as a screen test for Christopher Reeve and Margot Kidder, It sticks out  as an intrusion upon style, continuity and film stock, but if this was the only way to put this scene in the film, no true fan will object. A few more minutes of dear departed Chris Reeve, a few more minutes of lovely Margot, sharing with him the intimacy between their characters that is fundamental to this film, we’ll take it any way we can get it.

and this is oh so much better a version. Essentially the story is the same: the three Kryptonian villains are released from the Phantom Zone by the detonation of the nuclear warhead launched into space by Superman in the first film, come to Earth and take it over until defeated by Superman draning their powers. Meanwhile, Lois’s developing conviction that the bumbling Clark is Superman (much much less annoying than in the comics) exposes his secret, leading to a night of passion (lucky sod), Superman abandoning his powers for happiness but being forced by his responsibility to recover them to save the world.

It’s the same story but the details are so different. Lester’s nonsense is junked, and although Gene Hackman is allowed to ham it up as Lex Luthor nearly as much as before, his is the main comic role in the film and his slimy double-dealing performance becomes a more organic element.

Instead of the reveal of Clark’s identity by his tripping up and putting his hand in the fire unburnt, the test footage shows Lois proving her point more directly by shooting Clark at point blank range.

That completely changes the underlying dynamic. The Lester version depicts a potentially subconscious wish on Clark’s part to share his secret with Lois, whom he loves in both halves of himself, whereas in Donner’s cut the secret is forced out of him unwillingly. I’m ambivalent about the change: I like the idea of Superman wanting to admit his dual identity, yet Donner’s version makes the ease with which the pair fall into the relationship they both want all the more sweet and impressive.

There’s a significant, indeed seismic shift along all this thread. Under Lester, Superman agrees to lose his powers forever after a warning from his mother Lara and undergoes the red rays before hoping into the hammock with Lois. Donner’s cut loses Suusannah York completely (always a shame) but substitutes Brando as Jor-El with a much more comprehensive and cohesive, enabling Reeve to put over the importance of Lois to him (Margot Kidder observes all this in silence, dressed in a Superman t-shirt and white socks, demonstrating that she’s got great legs, but this was not a time period when ladies showed them off).  Crucially, in Donner’s cut, Superman has his powers removed after he’s slept with Lois, not before, lending weight to the importance of the emotional relationship and leaning away from the sexual one.

There’s yet more. We still get the slightly embarrassing diner scene with the thuggish truck-driver but this time Donner’s shots and angles focus on Superman’s determination to regain his powers for the protection of the world rather than because he don’t like getting beaten up. And if he can sleep with Lois without having to lose his powers, that removes that cheapjack aspect.

Better yet, when Clark gets back to the Fortress, Donner produces Jor-El one last time, the father anticipating everything, including the need to use the last of his energies to re-spark Kal-El’s powers. Not only is it an effective explanation of  just how Superman comes back, it is also a second and last parting between father and son, this time with the son of an age to fully understand that this is the end. You watch things like this and ask yourself why that clown Lester was allowed to not just chuck the whole thing out but put nothing in its place.

The battle in Metropolis de-emphasises the crowd and Lester’s desperate need to include silliness, emphasising more of the aerial fighting between Superman, Zod and co (and any extra footage of Sarah Douglas strutting her stuff in her slit sleeves and leggings is always welcome, for the same shallow reasons) and making the whole thing more impressive.

Lastly, the bullshit notion of Superman getting Lois to forget everything by kissing her is dropped like the cracked pot it is. We lose Lois’s desperate pain at not being able to acknowledge Clark and substitute a kind of downbeat resignation at having to share the man she loves with the wotrld, any one of whom have to come before her. Then, in either a steal from The Movie or, more likely, the proper use of the trick, stolen by Lester, Superman turns back time, revolving Earth backwards, not to save Lois’s life but to undo all the effects of the film, all the death and destruction and Lois’s discovery. The reset is so complete, Zod, Ursa and Non are restored to the Phantom Zone insread of being presumably buried in the ice.

It’s a more mature use of the device, even as it’s a complete reset to zero (Zod and co are available for future instalments, had there been more). Butthen the Donner Cut is a more mature film on every level, because it treats its audience as mature, isn’t scared of what other people might think, and it can take Superman with the right degree of seriousness.

I know I overuse the Earth-2 schtick, but this is the epitome of it. This was the version released there in 1980, and we didn’t get the same Superman III and IV, and Terence Stamp and Sarah Douglas reprised their roles in V – The Revenge of Zod, and I’m really fantasising now but the continued depiction in the series of just how good Lois and Superman were when she knew his identity led DC to bring it into the comics a lot earlier than they did… And maybe Chris and Margot avoided the fates they experienced on Earth-1, which would be the real magic…

With today’s film, the boxset phase of Film 2019 ends. I’ve continued to collect single film DVDs and I have enough for a shortened season of Film 2020 of three months duration. Being of an orderly frame of mind, I’m going to save these for the New Year rather than start next week. To bridge the gap, I have three downloaded films of very different types, and I’ll play through these over the next three weeks. I have never watched any of these: it’s going to be fun.