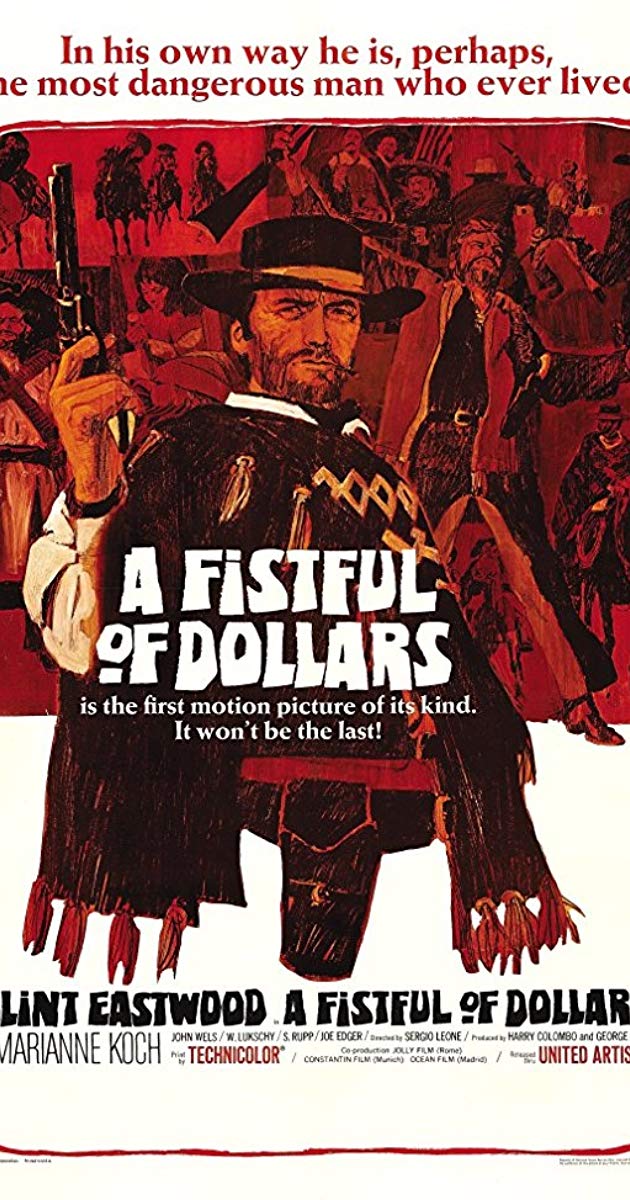 There are no partitions between single movies and boxsets in Film 2020, with a couple of trilogies to fit in as the season progresses. The first of these is the ‘Man with No Name’ trilogy that established Clint Eastwood as one of the most successful actors of the past half century, courtesy of a four DVD set acquired from eBay for 99p plus postage. Can you deny that is a real bargain?

A Fistful of Dollars, appearing in its own credits without the indefinite article, has a more complicated background that I was aware of. Some aspects of it are world-famous: Eastwood’s first starring role, Director Sergio Leone’s first star movie, the founding of the spaghetti-western genre at a time when Hollywood was abandoning the traditionlly American form of the Western.

But I wasn’t previously aware that the film was made in 1964, and was Italy’s top-grossing film despite critical panning, but did not appear world-wide – i.e., in America – for another three years, when it was critically panned in many places. Nor was I aware that the film had an international cast, few of whom spoke each other’s languages, and whose dialogue, in accordance with Leone’s practice, was overdubbed, the film being shot silent. It shows too, in places, with imperfect matching of voice to lip: indeed, the main female role, of Marisol (Marianne Koch) is voiced by a different actress altogether.

And the anglocentric names under which the cast appear in the credits are all pseudonyms, as was the original Director credit to ‘Bob Robertson’. When the film was digitally restored in 2006, Leone was credited under his own name but all the other psueudonyms were retained, including ‘Dan Savio’ for the creator of the soundtrack,  Ennio Morricone.

And lastly, a large part of the reason for the film’s delayed release in America was the fear of legal action from the Japanese Director, Akira Kurosawa, the film bearing, shall we say, a more than passing resemblance to his 1961 film, Yojimbo.

I doubt you need anything like a synopsis for a film of this stature and endurance but here’s a brief one anyway. A stranger, obviously a gunfighter, arrives in the small Mexican town of San Miguel, discovering from the old tavern keeper, Silvanito (Jose Calva) that the town is split between two gangs, the Baxters under Sheriff Baxter (Wolfgang Lukshy) and the Rojo brothers, Benito, Esteban and Ramon (Gian Maria Volente, credited as Johnny Wels). The stranger decides to rid San Miguel of both gangs, by plotting with and double-crossing both. He provokes the Rojos into slaughtering the weaker Baxters but is captured and heavily beaten himself. After escaping and recovering, he engineers a shoot-out on the main street, killing all the Rojos, confronting and killing Ramon, though Silvanito saves him from being ambushed by Esteban. He then rides out of town, never to be seen again.

Put so very bluntly, the film can be seen to be composed of characteristic Western tropes of a kind all but played out, and as I’ve already said, Hollywood was already riding the genre out of town. But Leone, who  loved Westerns but was angry at how they’d been allowed to stagnate in the Fifties, brought a new perspective to the film, a directorial style that emphasised the emptiness and cruelty of the near-abandoned town, accompanied by the innovative use of close-ups as beats in the story, drawing the audience’s attention, rather than the reaction shots American film usually confined them to.

And in Eastwood we have a very different version of the Western hero. On the surface, he’s the same, the soft-spoken stranger who drifts in out of nowhere, cleans up the town, and drifts on again. In that aspect, he’s Shane, come to right what’s not his mess but which his nature compels him to resolve. Indeed, at one point, Eastwood’s stranger mentions a friend who needed help but didn’t get it, implying that he’s repaying a psychic debt or, as we would now put it, ‘paying it forward’.

But the Stranger is no parfit, gentil knight, no man who is not himself mean walking down mean streets. He’s a killer, a fast gun, fastest gun in the West, but he’s not a good guy, which is what attracted Eastwood to the part after years of being a good guy on Rawhide (I remember him as Rowdy Yates, or at least I remember watching him). The Stranger sees the opportunity to play both sides off against the middle, he being the middle, looking to profit from both sides.

No, the Stranger is taking money from both sides for information setting up the other, and when he’s caught by the Rojos, it’s when he’s searching for the chest of gold they have stolen by massacring two platoons of Mexican Cavalry expecting to buy arms and ammunition from the US Cavalry.

But in its final third, it’s as if the film starts to lose the courage of its convictions. I’ve mentioned Marianne Koch as Marisol, the film’s main female role and its third credited star. Koch, a German actress already experienced in Italian spaghetti-westerns, only has a minor, and entirely passive role (this is not a female friendly film) as the beautiful wife and mother, stolen from her family to feed Ramon Rojo’s lust, who cannot even see her little son.

When the Stranger frees her, killing five of Rojo’s men and smashing up the place, it’s to provoke the Mexicans into thinking the Baxters are behind it. But then he sends the re-united family off with a wad of cash that looks to be at least a substantial proportion of the money he’s already collected from both sides. And later, when he learns Silvanito has been captured by the Rojos and is being tortured for the Stranger’s whereabouts, he immediately appears to take them down.

Yes, he has more or less recovered, and he was going to do it anyway, but placing it in the context of Silvanito’s plight borrows back a large part of the classic Western hero’s altruism. If the Stranger is an anti-hero, as Eastwood relished being, the end of A Fistful of Dollars goes some way to re-wrapping him in the trappings of Shane and his kind.

Especially as his departure is empty-handed, the gold forgotten.

It doesn’t stop the film from being a taut thriller, if a frequently slow-moving one. But it’s slowness is a burning one, and Eastwood draws and holds the eye at every moment. Yes, it’s only a waymarker for the more bloody and more realistic westerns to come – over fifty men, and one woman are shot in this film and the only one who bleeds is Esteban Rojo, shot in the head: the only other blood spilled comes from the Stranger and Silvanito, and that’s from being beaten up – and yes, it blurs its severe tone by the end, and yes, it’s made on the cheap and you can tell, but it’s nevertheless a classic, and a game-changer. And, like the prospect of Casablanca with Ronnie Reagan as Rick, the film is unthinkable with Henry Fonda or Charles Bronson in the lead role, both of whom turned it down, as did James Coburn, who would have been good.

According to Wikipedia, Eastwood was tenth choice for the part, and benefitted from a recommendation by ninth choice Richard Harrison, who claims his turning the role down was his greatest contribution to Cinema by passing it on to Eastwood. You look at Eastwood and his career, and the sheer longevity of his time in the spotlight and you imagine that if it hadn’t been this, something else would have happened to break him world-wide, but that isn’t always the case. Some things can only happen under a precise and unforeseeable set of circumstances: Harrison takes the part, or Fonda, Bronson, Coburn or any of the others  and one day there’s a three line obituary mentioning the death of an actor who once played Rowdy Yates, second star in a long-running TV western.