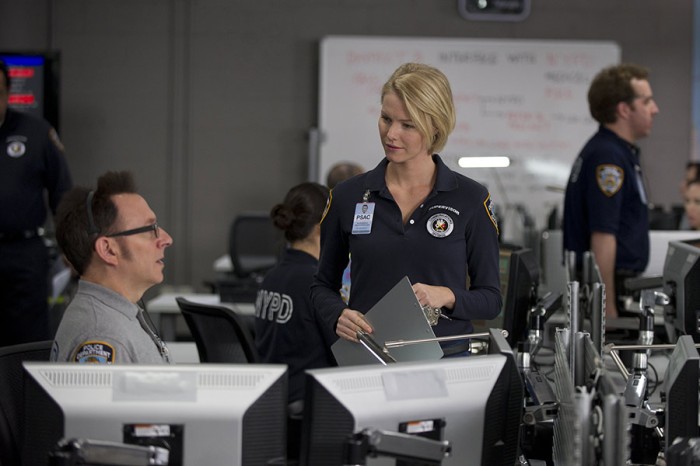 Yes, again it’s a procedural, a one-off, but this time with a far better, much more involving story, and another opponent who offers recurring possibilities but who, in the end, will return only once.

We start in media res, with Finch in the field as a Trainee operator in an NYPD 911 call centre, where he’s got his eye on the Number, Sandra Nicholson, an experienced, wise, calm-under-pressure supervisor (Melissa Sagemiller). Reese and Shaw are on standby outside, amused at Finch’s lowly role.

Meanwhile, at the Precinct, Fusco is enjoying popularity after his takedown of Simmonds, in demand from his colleagues, especially rookie Detective Jake Harrison (Gavin Stenhouse) seeking guidance on working the  murder of Tara Cooke, which is not the street mugging it initially seems to be.

The threat to Sandra comes out of left field: she takes a 911 call from Aaron, a ten year old boy kidnapped from out of his apartment by professionals associated with a Mexican Drugs Cartel: off go Reese and Shaw. But Aaron is merely a lever to use against Sandra. unless she does exactly as she is told by a mysterious voice on her mobile phone, Aaron will be killed.

The vooice is clever. He’s  hacked into the system to divert this call to Sandra, he knows who she is, he knows what’s in her sealed Juvenile Court records (whilst babysitting and bathing a three year old boy, she left him to get a toy from downstairs, during which short period he drowned) and what makes her completely vulnerable, he’s even gotten a webcam attached to her headset so he can see everything she sees. All Sandra has to do is wipe 30,000+ 911calls from two days ago, calls that are part of evidence in innumerable cases.

One of these turns out to be the death of Tara Cooke. Fusco and Harrison’s case dovetails with the Number. Cooke was having an affair with her CEO and wanted to go public. He and his wife wanted her out of the way. In  order to save Aaron’s life, she agrees to do it.

The arrest and confessions of the married pair terminates the contract and spares Sandra the final decision, but both she and Aaron are to be killed anyway, to clear up loose ends. Reese and Shaw save Aaron from a bomb, Finch threatens to electrocute the hitman sent after Sandra, and she gets to relieve a certain amount of tension by belting him across the back of the skull with his pistol.

And Finch arranges a final meeting with Sandra, enabling her to see the boy she fought for and helped save before she returns to work. Shaw produces the only lead they have as to the voice, paired burner phones taped together. One rings: the voice speaks to Finch, assures him Sandra and Aaron are no longer under threat. But Finch… that’s a different matter.

The voice does return, a long way from here, whilst the show has much weightier matters on its mind, close to the end. Were it not for such matters, I don’t doubt this invisible mastermind would have proved to be more of a recurring threat. Indeed, as we will see, there’s a moment when this figure could have been introduced for a half-season arc, but the show chose a different threat.

As for now, though ‘Last Call’ effectively repeats the same trigger – a child under threat – as ‘Provenance’, it’s a far better story, in ppart because it’s not clogged up by implausibility. Sandra’s emotional commitment to saving Aaron comes over as deeper and more effective despite his being a complete stranger, and that’s down to Sagemiller’s performance. She stays graceful, and doesn’t let the emotions overplay, and it doesn’t hurt that whilst she’s a very attractive woman, that’s downplayed: short hair, full police uniform, no obvious make-up. There’s no glamourisation and that keeps her and Sandra grounded to great effect.

All told, a very solid episode that shows that Person of Interest can still succeed admirably even when it detaches itself completely from its overall flow. But with only eight episodes left, and a lot of ground to cover, it’s time that tide rolls over us.