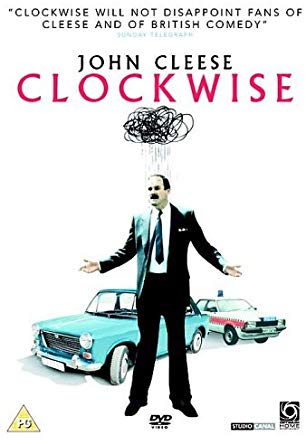 Everybody’s got a list of great film lines in their head, usually starting with ‘Play it again, Sam’ (which is never spoken in that form in Casablanca). Not all of these quotes are as famous as that: one of my favourites is ‘Brute force and ruddy ignorance!’ from The Life and Death of Colonel Blimp.

Somewhere in between those extremes is a line from John Cleese’s first solo film, Clockwise, a British film comedy released in 1986, which I saw in the capitol during my month working at London Office. It’s the first, and in plenty of cases only, line anyone remembers, for two reasons. One is that it’s a pentratingly accurate observation, and the other is that the film is not that good overall.

Rewatching it today, for possibly the first time since that hot summer, I realised I’d mangled the line in my memory, rather like ‘Play it again, Sam’. Clockwise, written by Michael Frayn, stars Cleese as Brian Stimson, headmaster of a successful Comprehensive School, a stickler for punctuality, who’s travelling from somewhere in Gloucestershire to Norwich to address the Annual Headmasters Conference, of which he has been appointed Chairman, the first ever from outside the Public School circuit.

By a quite natural mistake arising from his own habits, Stimson misses his train. The film is a well-constructed Farce, featuring his attempts to catch up and arrive on time. Having lost his suit, wallet and watch, dressed only in a monk’s robe, his press-ganged driver having taken off without him, Stimson collapses to the ground, exhausted, in a country lane and says, “It’s not the despair. I can stand the despair. It’s the hope…”

Ah yes, words of great wisdom, and what if I recall them slightly wrong? It’s that line that had me choose Clockwise for this Sunday’s film. I’ve been torn between despair and hope this week, and Frayn’s line has been in my mind every day. The despair I banished with unusual speed and completeness, in large part because of the events that have spurred the hope, but the hope is as ever dangerous. I can stand the despair: it’s the hope…

But enough of things I’m not going to start explaining in detail, let’s go back to the film. I’ve already summarised what it’s about, and categorised it as Farce. Traditionally, in its classic form as established by Georges Feydeau, the Farce involves misunderstandings and coincidences and not a few bedroom doors flapping open at the wrong moment. There’s none of that here, or what there is is placed offscreen, but the plot involves, in its first half, multiple interlocking misunderstandings and comings and goings where people miss each other in passing, unaware of the other’s presence until too late.

Cleese plays Stimson as a kind of watered-down Basil Fawlty. Fawlty was a monster, but one we sympathised with even at his worst. We’re introduced to Stimson in the morning, as school assembles, upright in his office, looking out over the playground, issuing orders by PA to individual pupils, summoning miscreants with the single utterance, “9.20”.

The school runs like clockwork. Everyone knows where they should be and at what time. It’s the secret of the school’s success and it’s an obsession for Stimson. It’s efficient on a trains-run-on-time basis, and the kids seem to accept it, though there are dozens queuing to be seen at 9.20, but it cast the shadow of fascism over Stimson, whose dictatorial manner extends to his wife, Gwenda (Alison Steadman), already peeved that she can’t even go to Norwich with him on this proud day, not even to sit in a hotel and eat at McDonald’s (yeurchhh).

It doesn’t help to sell Stimson to us, but it underlies his obsessive determination to get there on time, even at the cost of taking over the lives of two people, and committing crime after crime after low-level but still criminal crime, just because he has to get there.

As with all such things, all it takes is one moment, and catch up is impossible. Stimson is supposed to catch the train on the left hand side of the platform. Unfortunately, he has the habit of emphasising things with an imperative “Right!” that sounds like a direcion, and which causes chaos driving. Here, Stimson listens to himself rather than the porter, gets on the train on the right hand side of the platform, misses his train… and here starts the despair.

I’m not going to summarise everything that happens. Cleese’s main supporting characters are debutante Sharon Maiden (who would apparently not appear again until an episode of Inspector Morse fourteen years later) as Laura Wiseley, a Sixth Former and school prefect enjoying a Study Period in which she’s taking her parent’s car, driving without a licence, for an illicit rendezvous with music teacher John Jolly (Stephen Moore) and the ever-reliable Penelope Wilton as Jan Garden, Brian’s ex-girlfriend of twenty years ago.

Stimson commandeers Laura and the car to drive him to Norwich. Her parents report it stolen, and are horrified that her Headmaster is taking an eighteen year old girl off to Norwich. Gwenda, who is driving three senile old ladies from the hospital on a day in the country, sees her supposedly train-bound husband putting petrol in a car and nipping off with one of his schoolgirls, jumps to the same wrong conclusion and sets off to Norwich with the three women, one of whom is carrying on a neverending monologue about which family member to leave a dozen sherry glasses. Both leave the petrol station without paying.

Jan comes in for the middle of the film. Having discovered Laura hasn’t passed her test yet, having driven into the back of a Police car, having pulled the nearside wing off the Wiseley car and strapped it onto the roofrack, Stimson pulls up in a village to use a telephone box to warn Norwich he’s running late. The phones don’t work. In his frustration, he smashes the receiver. Jan, who lives overseas, is visiting her mother. They and Jan’s children are about to sit down to lunch. Whilst her Mum phones the Police to report the vandalism, Jan goes out to keep the perpetrators talking. She recognises Brian with delight, assuming Laura is his daughter, even kisses him enthusiastically. Apparently, when they were going out together, Brian was so disorganised, he was always late for everything…

But, since Stimson won’t let Laura drive, and she now won’t let him drive, he cons Jan into taking the car for a ‘spin around the block’. Jan’s mother reports Jan as kidnapped, and basically she has been, because Stimson starts directing her towards Northampton, where she can catch a train back…

Jan ends up arrested herself, for stealing the car, driving a vehicle in an unroadworthy state and, left offscreen but we can easily imagine it, assaulting a Police Officer.

Most of the second half of the film is about the journey. Having set up his multiple conflicts, Frayn gets everyone to Norwich way ahead of Stimson, and keeps cutting back there as the headmasters try to cope with the increasing number of people wanting their absent Chairman, which include both local and regional Police, whilst fretting over the misunderstandings piling up over him.

In the end, Stimson arrives dead on time, in a stolen Porsche, in a stolen suit too small for him, with one detached sleeve held on by sellotape, carrying a stolen wallet with £1,000 cash in it. After rehearsing his pompous speech all day, he quickly loses track as various people enter the hall late, becoming the tyrannical headmaster as he undergoes a breakdown.

That’s about all we get for an ending. Stimson’s arrested, Gwenda’s arrested, Jan’s already been arrested but once again this is one of those films that doesn’t have an ending, just a stopping point. Farce in Feydeau’s form does restore the status quo, allowing the far-fetched to be explained, understood and resolved, but any resolution in Clockwise would put a colossal damper on the fun, of which there hasn’t been anything like as much as we hoped, because it would have to make explicit the inevitable realisation that Stimson’s detroyed his career and his life and probably his marriage, he’s led the wholly innocent Jan, a visitor, into massive difficulty with the Police, not to mention the trauma of her disappearing from her family and young kids at lunch, he’s exposed Laura and her nebulous affair with Jolly, he’s wreaked havoc and there’s going to be hell to pay. Feydeau’s subjects are never innocents to begin with.

Overall, the film’s problem is that it’s just not funny enugh. Some things made me giggle this time, but there’s none of the belly-laughs such ludicrous goings-on should provoke. Farce is about hysteria, controlled hysteria, but the only hysteria here is Stimson’s drive to obey an imperative that simultaneously makes him pathetic and ruthless.

It doesn’t help that the surroundings are so cosy and so English. The film was shot entirely on location, in green and pleasant lands and picture book villages. It’s too comfy and cosy, and the production is not that much greater than a decent TV film of the era. It’s just to ordinary and parochial to work as it was intended.

The acting’s decent. Alison Steadman has little to do and has to fight a purely reactive role without any strong lines. Stephen Moore bumbles along without having to throw too much in, his character defined mainly by his inability to actually finish any sentences. Sharon Maiden, who was 24 at the time, has a big role but whilst she’s sparky and lively, her range doesn’t extend very far, and in a school uniform that includes a dark skirt below knee-length and flat shoes, she looks ill-proportioned.

Several recognisable British actors contribute cameo roles, Tony Haygarth particularly memorable a man on a tractor, but there are so many of them it’s like a game of ‘where do I know him from?’ Penelope Wilton is the best of the bunch as Jan, a delightful woman thrown in out of her depth, caught in a whirlpool, an innocent dragged down without ever knowing why or how. And she looks good.

So, not one of the world’s best films and, despite the blurbs, not even one of the better ones. The worst you could say abut it is that it had a lot of potential but didn’t come anywhere near living up to it which is criminal in any movie.

But it’s got that line that’s been on my mind this week, and I wanted to see it again for that line which has influenced me in so many ways. I can stand the despair…