Not many people know this but today, 4th June, is an anniversary.

DC Comics have been going around lately celebrating certain character’s 80th Anniversaries but I bet they haven’t even thought of this one. Then again, it’s not exactly a memorable number of years, since it’s only the 59th.

People, I refer you to the legendary, seminal, invaluable The Flash 123, the classic story “Flash of Two Worlds”.

Many of you will already be ahead of me, but for the others: Barry Allen, aka The Flash, puts on a show of superspeed stunts to entertain the children of the Central City Orphanage. He ends the show with his version of the Indian Rope-trick which causes him to vanish and reappear outside of town. and town is different when he gets back.

That’s because Barry Allen has become the first person to penetrate the vibrational barrier and find himself in another, parallel world. One in which he is in Keystone City, one in which the Flash is the retired hero Jay Garrick, whose adventures filled Flash Comics and All-Flash throughout the 1940s.

He has landed upon what will become known as Earth-2. The Multiverse is born, and the number of stories that derive from this one moment is incalculable.

What leads me to say that today is the Multiverse’s 59th birthday? Go to your copy of “Flash of Two Worlds” and turn to the panel where Barry-Flash, fearing he’s dropped through a timewarp, stops off at a newstand to check the date of the paper. Its the Keystone City Herald, not the Central City Picture-News, the moment at which Barry realises he’s in a parallel world. 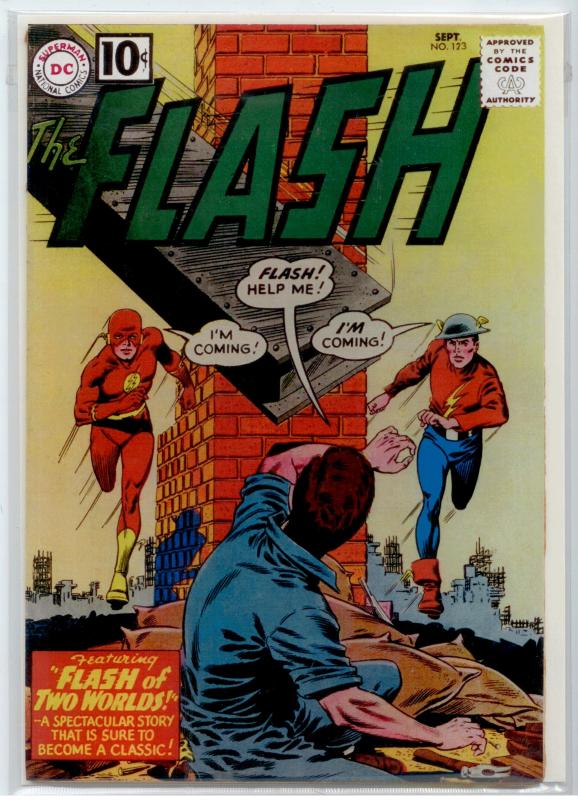