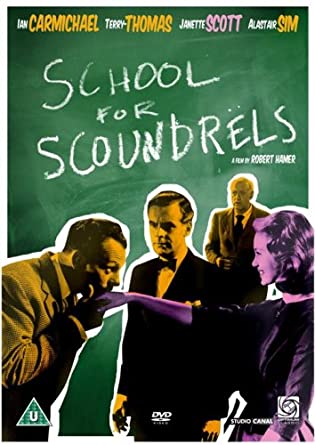 It is a truth universally acknowledged that on a bright, golden September Sunday morning there is little better than a dive into nostalgia.

School for Scoundrels was released in 1960. I don’t know when I would have first seen it, 1963 at the very earliest, these being the days when there was a bar or an agreement upon feature films being seen on television for three years after they appeared in the cinema. Whenever it was, it was Sunday afternoon, once Sunday television had been opened up to relative freedom as the grip of the Sabbath was being gently released: those quiet and uneventful Sundays of Mother cooking roast dinners, Father tuning the car, the somnolence of Britain away from the stress and activity of the six non-special days of the week.

Though it’s far from its purpose, the film captures that splendidly, sinking into its time, one I barely remember, having been a child at the time, but which is nevertheless burned into me because I was a child at that time and this was the world I was born into.

School for Scoundrels starred a fourway cast of Ian Carmichael, Terry-Thomas, Janette Scott and the under-utilised Alastair Sim. It’s based on Stephen Potter’s once famous Gamesmanship books, sketch books of situations turned to one’s advantage, justifying the film’s sub-title of or; How to win without actually Cheating.

Carmichael is Henry Palfrey. The film starts with his arrival at Yeovil train station and following, across abandoned and waste ground, of a series of pointing finger placards that direct him to the College of Lifemanship (prop. S. Potter) where he is going to learn how not to be a loser. Alastair Sim is Potter and is wonderful because he is Alastair Sim.

Palfrey (this is the Fifties, men addressed each other by their surnames, just as I did my schoolmates when I went to Grammar School in 1966, it was ingrained) is a gentle, easy-going and therefore put upon soul. He runs a family firm whose employees ignore him, and at which he is ruled by the Chief Clerk Gloatbridge, with constant reference to Palfrey’s ‘late Uncle’. He loves tennis but has been dropped from the weekend match. Everyone takes advantage of him.

But Palfrey has met April Smith (Scott), a nice-looking, slim-figured young woman, bumping into her as he leaps aboard a London bus from which she is alighting (the old fashioned, open-platformed buses with conductors). He invites her to dinner at a really swanky restaurant that refuses to seat them at first, because his name is mis-spelled, and then because they are late – from this faffing around. Enter Terry-Thomas, playing his usual snake-like lecherous smoothy as Raymond Delauney, who sets out to seduce April under Palfrey’s nose.

This includes inviting her to watch a ‘friendly’ game of tennis with Palfrey in which Delauney drives April in his hot-spot Bellini sports car (actually a re-shaped Aston Martin – even the car names are a glorious nostalgia) and one-ups Palfrey every step of the way, humiliating him in front of April,

The plot therefore is very simply. Palfrey enrols at Yeovil, learns all the ploys, and is accompanied by Potter on his ‘field trials’ in which he turns the tables on the crooked Welsh car dealers (Dennis Price and Peter Jones) who originally conned him into buying a total lemon of a car, getting them to take it back in exchange for a nifty little sports model and 100 guineas (guineas, ye Gods!).

He also asserts himself as the boss of his firm, by the simple expedient of introduing an error into the cash register to make a total £10 out before setting out to totally infuriate Delauney over a return match, not to mention screw him up over April. It’s beautifully played, with Carmichael investing Palfrey with a slightly artificial confidence overlaying a genuine confidence, turning up in tartan flannel shirt and old and baggy trousers, playing with an ease and deliberate slowness with one hand in his pocket to the ever-increasing frustration of the properly be-whited Delauney, getting increasingly unnerved at how everything is going against him without understanding how or why.

From there, Palfrey segues perfectly into taking April out for a drink, which metamorphoses into a drink at his flat, during which he employs a ploy telegraphed from earlier in the film to get her to spill her whiskey and soda all down her dress. April has to change into Palfrey’s over-sized dressing gown whilst her dress is being dried before the fire, from which it is but a step to decoying her into the bedroom to avoid being seen in compromising circumstances, a laugh at how sexless a woman looks in a man’s dressing room from ‘Uncle Henry’…

I’d like to drop out for a moment to coment on how backwards-looking this section is. The truly sexless atmosphere of the film, and its comedic naievete spares the film, but what we have here is a pretty basic demonstration of how to trick a woman into bed. The Potter book this is based upon is Woomanship, whose actual sub-title is quoted, being, ‘How to be one-up on a woman without actually marrying her’. It’s a precursor of the infamous book, The Game by Neil Strauss, and it’s a queasy undertaking. I confess that it’s only my nostalgia, slipping back into the time of the film, understanding its essential innocence, that keeps me from being heavily criticial of this section.

But Henry, on the point of sharing a very passionate (but still closed-mouth kiss) with an attractive woman, who is wearing only his dressing gown and her underwear, in his bedroom, not a yard from a double bed… catches sight of himself in the mirror and repents instantly. He wants April to dress and he’ll drive her home. He can’t go through with it.

Which makes all the difference. Because Delauney has seen Potter at the tennis club, trailed him and, offscreen, bearded him. Delauney pounds on Palfrey’s door, calling him out as all manner of cad, rotter and rat (for wanting to do to April what Delauney wants to do) and acting all possessive to her, here to save her, exposing what Palfrey’s done: from couch to bedroom in three easy steps.

April recognises how she has been betrayed. But Henry stopped, Henry reversed himself. And that made the difference. Potter shushes Delauney, who can’t understand why he, from so utterly winning a position, is suddenly the loser. Potter sees the birth of a new ploy but it’s not. Henry loves April, and April loves Henry. And now they’re kissing, in a room full of people, one of whom, Mr S. Potter, is seriously embarrassed. It’s the one thing that Oneupmanship cannot defeat: sincerity. And it is dreadful.

And Alistair Sim approaches the camera and addresses it, apologising to the audience for how things have turned out, and then his face twists in pain as he addresses the Orchestra, who are filling the air with romantic music as Henry and April kiss and hug and kiss and hug (lucky blighter) with Sim telling the band to stop that infernal din…

And the last shot is the train station at Yeovil and the pointing finger signs, but the man who’s gotten off the train is Raymond Delauney…

Ah, nostalgia. School for Scoundrels isn’t really a film, in the sense of a story. It’s just a string of cyncically funny ideas from three of Stephen Potter’s books given a rough shape. The film is about set-ups, sketches, and in the case of the final sequence, rather dodgy ones too. It’s heaped with familiar British actors and actresses making cameos with skill and professionalism, and it’s graced with a strong principal cast whose combined abilities elevate the film.

Like I said, Alastair Sim, a great and subtle comic presence, is under-utilised: at greater length his ability to undercut comedy with a faintly cynical aspect would have made the gamesmansip even funnier, but perhaps that would have been at the expense of the film’s essential innocence. Janette Scott, a very popular actress of the period with a wide range, whose fame has not carried on in the manner of her three co-stars, is also undercharged. She’s a perfectly lovely, fresh, self-possessed and genuine girl of the late Fifties, utterly natural, but April Smith’s role is entirely passive by the nature of the story. April is the ‘prize’ and she is acted upon throughout, which is a shame but only to be expected.

Ah, nostalgia. One definition is the art of seeing the past through rose-tinted glasses, more potently when it comes to your own past. School for Scoundrels is a film that saw the present through rose-coloured glasses so the two tie up together nicely. As I get further away from the beginning of my life I find it increasingly important to capture as much of it as I can. This still sunny, golden Sunday morning has been perfect for it.