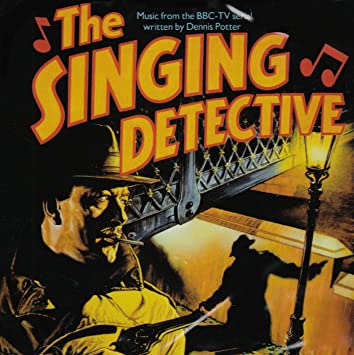 Boys from the Blackstuff is not the only landmark BBC series from the Eighties that I’ve picked up in boxset from the invaluable Vinyl Exchange and have not yet sat down to watch (and I still have Edge of Darkness to come to). The Singing Detective, the late Dennis Potter’s undisputed masterpiece, was first shown on BBC1 in November and December 1986. I watched it then. It has been repeated, but whether I watched any repeats I can’t remember. This is certainly the first time I’ve seen it this century.

My rule of thumb for series with hour long episodes was meant to be two for a Sunday morning, but a single episode of The Singing Detective, even the opening episode, is intense enough in its own write to want to let the experience sink in. So we’ll be here for the next five weekends as well.

As always, the question is, what can I say about a series that has produced millions of words of critical comment? Let’s just take this a step at a time, try to pretend this is something entirely new, and view the initial episode in that light.

The series stars Michael Gambon, Patrick Mallahide and Joanne Whalley, and was a breakthrough for each of these. Gambon is Philip Marlow (the choice of name is deliberate), a patient in a London hosital who is suffering from psoriatic arthritis, a condition he has had for twenty to thirty years but which has risen to a peak: Marlow’s entire body, all muscles and joints, are affected and he is in constant pain, practically incapable of doing anything with his body. It’s exactly like fibromyalgia, but the psoriatic aspect means that simultaneously, his skin is flaking, his body covered in lesions and sores. Everything hurts him, even the touch of his pyjamas. In case we don’t get it for ourselves from Gambon’s performance – and he is superb beyond belief in a first episode in which he is confined to a bed, unable to express himself with anything but his eyes and voice – in a rare example of a bad line, Potter has Marlow tell us that he is a prisoner in his own body.

Marlow is a writer, a washed up writer who, apart from his inability to even hold a pen, has seen all his books go out of print. Inevitably he is – was – a writer of detective fiction, although the young and sympathetic Nurse Mills (Whalley) doesn’t understand the significance of the name. She has the task of greasing his skin, to cool him down, to try to ease flexibility and the pain, which leads to her having to deliver the line, ‘I’m going to have to lift your penis so that I can grease round it’.

This is part of a mentally frantic scene in which, in a vain attempt to hinder such penis’s instinctive response to such a situation, Marlow frantically tries to think of boring things, a litany in which we detect Dennis Potter’s own attitudes.

Reduced to near total immobility, Marlow tries to exercise his mind. He mentally begins to plot out a detective story set in 1945, full of theatrical gestures and moods, a composition of fantasy and cliche shot through with a bitter reality. A Detective – Mark Binney, played by Mallahide – visits a night club, Skinskapes, where a band plays the lazy, hazy, sultry music of the period, with a beautiful and husky girl singer (Whalley again). He sits with a hostess in a sailor suit, Amanda, slips away to investigate backstage where he finds his disguised tramp contact dead with a knife in him, and leaves the club with Amanda, and her Russian fellow hostess, Sonia, where he’s going to get something in return for all the money of which he’s been fleeced.

Marlow’s writing this in his head, mixed up with and crossing over into real life. There are little trails being laid, things that we don’t yet know where they will fit it – a repeated scene of a woman’s naked body being fished from the River (Thames?), cut and whipped, watched by a variety of people from the nearby bridge. There’s two sinister men, one little, one large, with trenchcoats, fedoras and pencil-moustaches, lurking around Binney. There’s the other patients in Marlow’s ward, long-termers, their lives in suspension. A Greek Chorus of the irascible but feeble Mr Hall (David Rydell), with some kind of bladder control issue, and Reginald (Gerald Horan), the unwilling audience to his rants, a young working class Londoner trying to read a book, the shaky and incapable Nipsey and Marlow’s next bed neighbour, Ali (Badi Uzzaman), in for heart problems who, in trying to pass Marlow some sweets, suffers another and fatal heart attack.

Ali’s death is heavily foreshadowed in the episode. He’s also the object of some racist comments by Marlow that would be completely unacceptable from a sympathetic character now. It’s made clear that Ali understands they’re not meant either personally or racially: they are the safety valve of a man undergoing great pain without the least hope of it being relieved, a man bitter, angry, sarcastic, taxed beyond endurance by the infantilistic and impersonal treatment he gets from the doctors and nurses (one of them Imelda Staunton), striking out verbally because he’s no other way of striking out. But maybe Ali also accepts the words because he’s had to learn to accept them, because they’ve been the currency of white Britain all his life. We never entirely know what’s inside us, especially those of us brought up when skins that weren’t white were less visible.

Potter also used The Singing Detective to expand upon the format he’d created in Pennies from Heaven, the merger and contrast and collision betwen real life and the soft, sweet fantasies of popular romantic music – Extraordinary how potent cheap music is, as Noel Coward put it. That music underpins the detective noir sequences and it escapes into real life in spectacularly choreographed fashion when Marlow hallucinates the consultant, his staff and the ward nurses going into ‘Dry Bones’.

No, the opening episode is about introducing all these people, about showing us something but not everything about them, laying trails and cross-trails that dig into Potter’s own history: he too suffered from psoriatc arthritis, and he came from the Forest of Dean.

And there’s something else I didn’t mention, two cameos, both of a small boy standing high in a tree, a tree in a thick swirling English forest, the Forest of Dean. In the first he is silent whilst, offscreen, a voice calls his name, Philip, describes him as ‘me old butty’. in the second, ending the episode, the camera moves closer, close enough to hear him muttering, the same thing, over and over, until he looks into the camera and tells us, ‘I be going to find out’. We will.