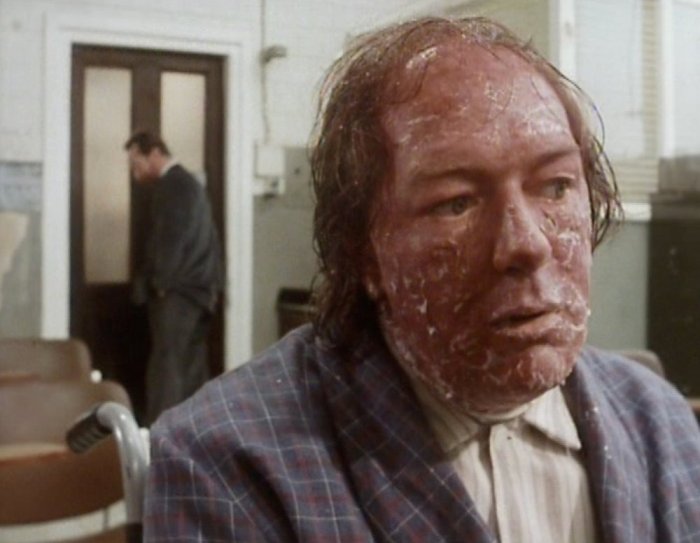 Episode 2 begins to place a structure upon this story, letting us see it as something composed of two levels and three corners. The levels are, of course, the past and the present, and the corners are two pasts and the present, two pasts, one fictional and one that, in the absence of any indications to the contrary, but without any actual confirmation, we assume to be real.

We’ve seen two corners already, in the first episode, Marlow’s present as a hospital patient with a severe and incapacitating skin condition, and the unreal past of a detective story he once wrote, now replaying in his head in a fantastic manner that we intuitively understand is not how it came out on the previously printed page. This progresses through Mark Binney’s unpleasant and sick encounter with the Russian ‘hostess’ Sonia, with whom he has sex: Binney’s contempt for Sonia is less for her selling sex than for having sex in the first place. His entire manner, even before we see that he has sex with his shirt and vest on and his shorts only pulled down as fas as his knees, so he can quickly cover himself up afterwards, whilst she is naked but for stockings and her black bra pulled down to her waist, is nothing but disgust.

The two trench-coated men are watching his house. Sonia panics and flees, only to disappear. The police suspect Binney, who protests his innocence to Philip Marlow, The Singing Detective. Gambon plays the fictional Marlow, all cleaned up and sharp-talking, a fond play on Chandleresque quips and stylistically constructed sentences. Detective Marlow must find Sonia but, just as we realised in the first episode, she is the naked body fished out of the Thames. And the trench-coated men effectively force their way into Binney’s house at the end, pausing only to comment upon a painting of Sonia, bare-breasted, showin that they, too, have a twisted attitude to sex.

Make no mistake, no part of this series is ultimately free from a problematic attitude, no, a loathing and disgust for sex as sticky, unpleasant, lubricious, farcical, life creation in a messy squirt. It’s there in too much of Dennis Potter’s writing, it comes from his own responses, but The Singing Detective is where he treats it to the most rigourous examination.

We see that start with Marlow being wheeled – the wheelchair squeaks, naturally – to his first meeting with Dr Gibbon, whose first step is to leave Marlow alone, able to see a copy, bent and twisted, of The Singing Detective, Marlow’s original paperback. Marlow is rude, dismissive, sarcastic and offensive, we already know that. It’s never been more obvious a defence mechanism, deflection, roadblack, the lot. Gibbon can easily see it as such, but he easily gets under Marlow’s skin, despite the patient’s urgent desire to avoid being exposed in any way, by reading to him a passage from the book, a passage about sex.

It’s a bullseye. Without having the book to check, I’m convinced Potter stole the passage off himself, his first novel, Hide and Seek, but it’s the same passage of disgust, even hatred. And fear.

It opens up the third corner, the real(?) past. The young boy at the top of the tree in the Forest of Dean (where Potter was born and raised) is Philip aged 10, and we open up to see his childhood. The cramped little miner’s cottage that Mr  Marlow and his wife share with his parents, with no room and no comfort. Marlow is, and his Dad was until coal dust in the lungs crippled him, a miner, but his beautiful wife is a cut above him, not of the Forest with its accent and sometimes impenetrable dialect. She’s highly-strung for one thing, though then again in those conditions who wouldn’t be?

But Marlow’s a beautiful singer (mimed of course) to his wife’s piano accompaniment, singing at the pub to wild applause, whilst she plays a complex piano piece to respectful silence. The compere, Raymond, is Patrick Mallahide again, a second mixing of the separated elements.

All of this is released in the skin-diseased Marlow’s head, his defences punctured, the flood of memory overwhelming as he develops a high fever. Coming late to the dining room argument and taking the blame onto his own head because it was he who was late. Showing off in class, supplying all the answers, teacher’s admiration and his classmate’s revenge on him (flaming hell, that went close to home, because I did that once: once only), delusions about the future at the top of the tree. And discovering his Mum lying in the gass of the forest, her dress up to her waist as a man lies on top of her, his bare bum bouncing. We don’t see who he is this time, but we don’t need to. We know who it’s going to be.

Marlow’s in a fever. The new patient, replacing Ali, is an obstreperous old bugger. But then he has a visitor, Nicola. We don’t exactly know her status but again we know who she must be. Marlow’s asleep, for which she is grateful. She’s horrified by his appearance, horrified but not disgusted, a point that’s not belaboured. She won’t stay, doesn’t want him woken, he’d only abuse her, and yes he does when he wakes, as she’s leaving the ward. Bitch. Whore. Slag. Who’s she spreading her legs for now?

Yes, you take the point. It will be developed further in succeeding episodes.