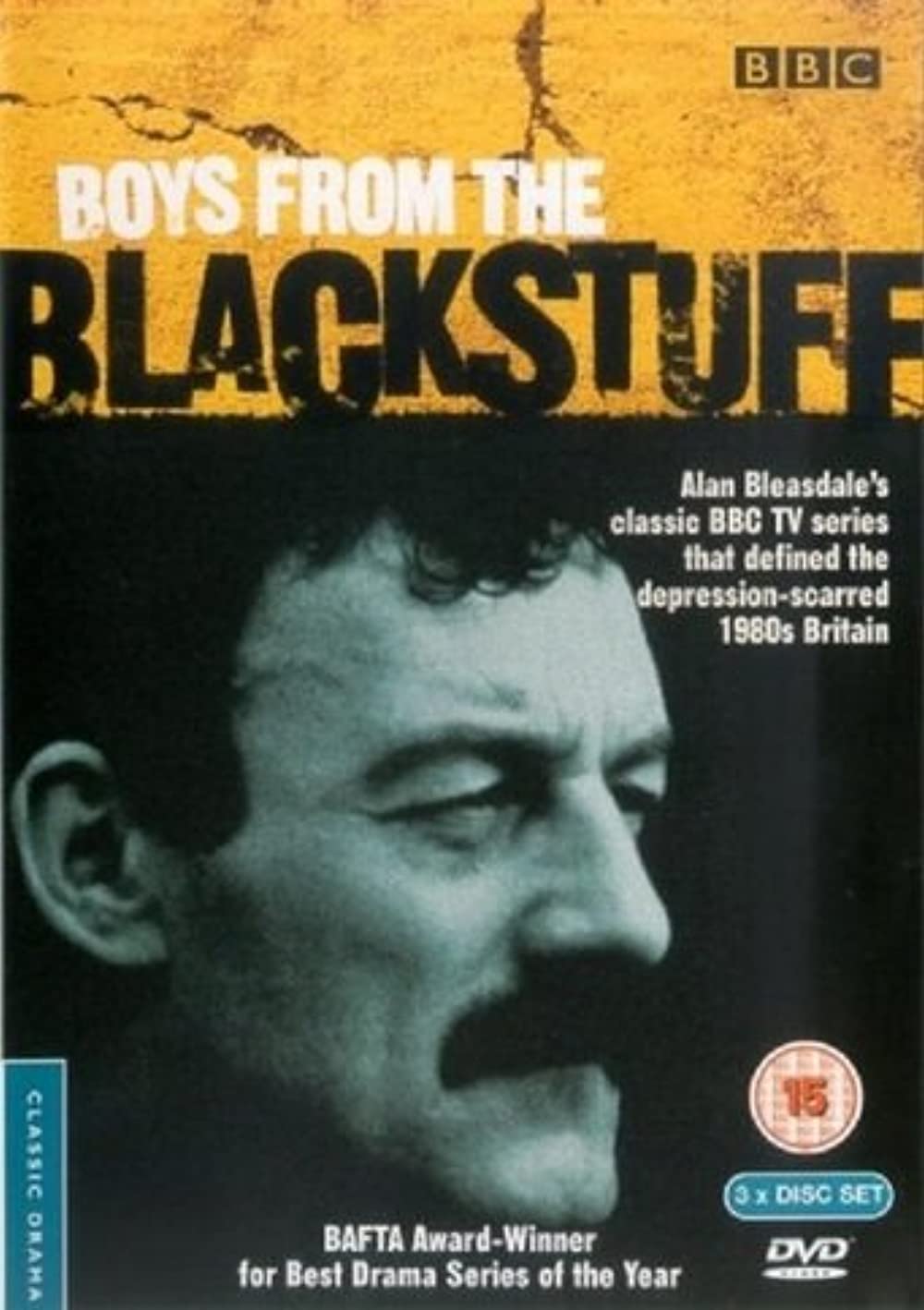 This is not going to be an easy ride. Already, just one episode has shook me up, leaving me wanting the scream with rage and frustration and cry at the way this country treats those people who they don’t think are important. This legendary series is all but forty years old, but the real disgrace is to look at it and to understand that nothing has changed. It’s still like this. Why do we allow this to happen?

Boys from the Blackstuff was commissioned in the wake of Alan Bleasedale’s highly-regarded one-off play about a group of Liverpool working men who come a cropper, losing jobs and life-savings trying to pull a fast one, doing a ‘foreigner’ whilst on a road-laying job in Middlesbrough. It was to be a five-part fifty minute series, each episode focussing upon a different member of the original crew, and what their life wasa, in Thatcher’s Recession, in Liverpool, a city discarded, without a job. It was a social record as much as a TV series, and for once in my life, in 1982, I sensed it in advance and I videoed it, to keep, unseen. Never was I so right. I can remember sitting there, watching it, just remember watching it, waves of pain emanating from every moment of screen-time.

The oddity is that four of the series’ five episodes were written by Bleasedale before Margaret Thatcher was elected Prime Minister in 1979, but the series has been acclaimed – and justly so – as an indictment of her Britain.

Watching episode 1 again, I was struck by how polarising it could have been seen to be. The episode reunites the whole Blackstuff cast, though Dixie (Tom Georgeson), Kevin (Gary Bleasedale) and George (Peter Kerrigan) only appear in minor roles. Chrissie (Michael Angelis), Loggo (Alan Igbon) and Yosser Hughes (Bernard Hill) have full roles and are joined by Jimmy (Vince Earl) and Snowy Malone, George’s son (Chris Darwin), who were not in the original play.

All five are signing on, unemployed. They haven’t worked since being sacked at the end of the one-off play. But they’re under observation by the ‘sniffers’, the Department of Employment inspectors, who believe, correctly, that they are working for cash-in-hand and claiming full unemployment benefit.

The episode follows them to the site that’s being renovated which, with true Bleasedalian/Scousze irony, is to become a Department of Employment office. Chrissie is driving, picking up Jimmy, Loggo and Snowy, the later a fervent Marxist, Workers’ Revolutionary Party member, who bores everybody’s ears off with his beliefs, about which they all take the piss, though Bleasedale turns this ranting on its head when Snowy, somewhat desperately, compares things today, the every-man-for-himself culture, forcing his three listeners to recognise that he is correct, and in turn forcing Chrissie to articulate the fear, of being married, of having kids, of needing to put food in their mouths.

Chrissie is the central figure, an ordinary, decent, basically honest working man who doesn’t want to be doing this illegally. He puts up with Snowy, a plasterer with his own honest ideal of craft, of doing his work properly, whose ideal is workers doing their best and making things to last, like the hundred year old tiles on the stairs, immaculate and beautiful, built to last, not like the crappy bannister rail screwed into them.

No, Chrissie still wants respect, and he wants his own respect for himself. That’s why he walks off the job when the contractor, Malloy, won’t take him on legal, even for less money. Then Loggo and Jimmy keep him waiting essential moments too long…

But, before I get to the finale, there is Yosser. Yosser the hardcase, Yosser the nutcase, Yosser the fatal combination of arrogance and insecurity. He marches up to the site, his three kids trailing behind (played by Bleasedale’s three children), claims to be a brickie and starts constructing a wall. He’s not a brickie. He’s crap at it. Everyone can see that but Yosser won’t listen. His actions, his part, is comical. Except it’s not. There’s no part of Yosser’s story that is in the least bit comical. You look at Bernard Hill, his scouser moustache, his tight, pale face, his unblinking eyes. Yes, he’s a nobody, a yobbo, a nothing, but he’s a human being careering down a long, dark tunnel whose end is agony.

Yosser’s sacked, even though he’s unemployed. He’s gone. Chrissie would have done but for having been kept behind. All day the sniffers have been shadowing the gang and now they raid the site, like Army Marines raiding a terrorist compound, except for the guns (this is apparently unexaggerated, actual DoE tactics). Chrissie, Loggo, Jimmy and Malloy try to run but are all captured. Snowy’s on the top floor. He tries to run but every avenue is blocked. He goes to abseil out of a window, but he’s tied his rope to that crappy, unworkmanlike bannister and it breaks, and he falls and he’s killed. Dead, his head hit on the pavement below, the blood pouring from it like an oil spill. Chrissie’s fight has ended. He knows Snowy. He knows George. He tells Jimmy to run, he didn’t know Snowy and anyway he’s dead. Jimmy gets away, slowing to a walk, hidng his face behind a pot plant, freeze frame on the fear in his eyes.

Everything I am and always have been which, despite thirty years as a Solicitor and a member of the middle-class, comes from growing up in a two-up-two-down East Manchester terraced house, puts me on the side of these people. Others will look at it and, with the callousness inherent to the right who believe that there are pre-ordained levels of society and this is right and good because they have to have people to look down on, will see it differently. They were liars, they were cheats, they were trying to get something they weren’t entitled to, they got what they deserved, especially the lefty one, no loss, and at the end of the day who gives a shit about scousers?

It was like that in 1982, it’s still like that in 2021 and we actually had a Labour Government for thirteen years in betwen and it none of it changed. Which is why today and the next four weeks will not be an easy ride. Oh, no.