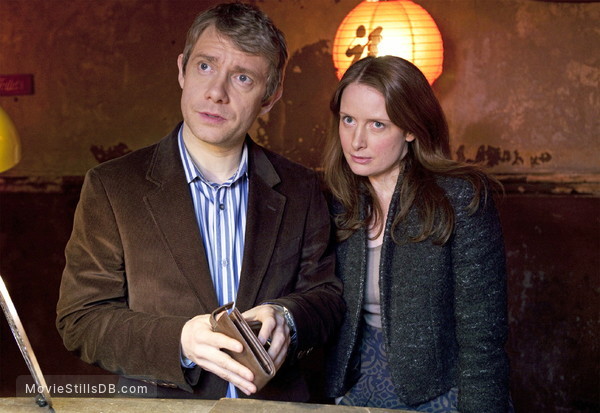 The Guardian, whose record on this series is not exactly reputable, actually thought that the second episode of Sherlock‘s first series was better than the first. It’s not. It’s very well made, intricate, a carefully balanced mystery with room for action, humour and a date that’s a bit of a nightmare, but it employs an unwelcome degree of stereotype (Chinese Tongs in 2010? We’re supposed to be riffing off Sherlock Holmes here, not Dr. Fu Manchu) and practically eliminates the supporting cast for no good reason. For this, you can blame writer Steve Thompson, but then again it’s not his fault that he’s neither Stephen Moffat or Mark Gatiss. He lacks the flair, and so does this episode.

We begin in properly oblique manner with the lovely Soo Lin Yao (Gemma Chan) demonstrating improbable methods of maintaining antique Chinese teapots whilst fending off the nervous attentions of colleague Andy, with John Watson dealing with self-sevice check-outs and declined debit cards in a supermarket and Sherlock keeping himself engaged by defending himself against a strangely adorned Chinese assassin in their flat, which is of only peripheral attachment to the plot. These random slices set up the parameters of the story.

Which begins properly with Sherlock being hired, for a much-needed excessive sum, by his old University ‘chum’ Sebastian (Bertie Carval, unrecognisable from his role as Jonathan Strange), who isn’t a popular stereotype of the ‘heartless banker’, no sir. Someone has broken in to the ex-Chairman’s office and sprayed yellow aerosol paint across the eyes of the portrait, plus a character on the wall that’s instantly recognisable as something oriental, almost certainly Chinese (come on, that deduction’s easy, Chinese teapots, remember?)

The thing is, it’s impossible to get into the room without tripping security, so how was it done? By a little bit of literal ducking and diving, Sherlock deduces that the cypher is a message for Hong Kong specialist trader Eddie van Coon, shortly to be found dead in his inaccessible apartment, shot in the right temple. An obvious suicide concludes Detective Inspector Dimmock (Paul Chequer), who’s substituting for Lestrade (with Molly Hooper and Mrs Hudson getting about two minutes of screen-time and three lines between them there’s a definite atmosphere of on-the-cheap this week). And Dimmock – an obvious nod to nominative determinism there – goes on believing it’s suicide even after Sherlock conclusively proves van Coon (I hate that name for its racist aspect) was left-handed and couldn’t shoot himself where he supposedly did with his left hand.

Next up, a freelance journalist is killed in a much more downmarket yet still inaccessible flat, which means there’s something in common between the two (hint, it’s Hong Kong). Indeed, rather than take the time the episode does to spell things out, I’ll connect the dots straight away. It’s about international smuggling, of ancient and valuable Chinese artefacts, held by the Black Lotus Tong (even the name’s a cliche). Van Coon and Lukis, the journalist, smuggled things into Britain which are then auctioned for shedloads of money. Unfortunately, one of them has pilfered something valuable, a jade hatpin worn by the Empress a thousand years before, worth a cool, or indeed red hot £9,000,000: they want it back and will kill anyone they have to. Or want to. Soo Lin is next on the list, but only after she’s explained a few things about the plot, including the Black Lotus tattoo on the heels of every foot-soldier for the Tong – foot-soldier, foot-soldier, get it? – and how she was impressed at the age of 15, a starving orphan.

The assassin who kills her turns out to be her brother. That’s another one from out of the Cliche drawer.

But I mentioned a date. Due to the need of money, John Watson goes back to work as a locum in a practice run by a very attractive Doctor named Sarah, who quite evidently fancies him from the outset and who winds up going on a date with him, even after he falls asleep in the surgery after staying up all night working on the case by going through crates of books and she ends up taking half a dozen of his patients on top of her being pulled out already: cute but just a tad unrealistic. Zoe Telford plays Sarah, and turns up for the date in a mid-thigh length skirt with opaque tights, and the woman has great legs.

The date. Ah, yes. John was going to take Sarah to the cinema (boring: Sherlock) until his flat-mate suggests the one-night only Chinese Dragon Circus, which is of course the Tong by another name and he’s gooseberrying their date. Of course it kicks off. Sarah wades in to whack a would-be thug with what looked like but surely couldn’t be the sheath for a Chinese sword – never go out on a first date without one in your handbag – and it all ends up with her and John kidnapped to an abandoned tunnel with Sarah facing an ancient Chinese death trap (bloody hell, we don’t just need a drawer for all these cliches, it’s got to be at least a tea-chest).

By a series of cleverly built up moments, the Tong, under the evil, vicious and poweful General Shan (uncredited) believe that John is actually Sherlock and that, by being Sherlock he will have cracked the puzzle and have the treasure, which he’ll hand over in exchange for Sarah’s life. There’s just one flaw in that thought. However, Sherlock arrives in Cavalry-mode, duffing up Shan’s two hemchmen whilst John saves the day by knocking over the death trap (it was pointed out at the time that Sherlock makes two unsuccessful attempts to untie Sarah from her chair where he could just have knocked it over to get her out of the way, but then that wouldn’t have provided the exciting last second escape, would it?)

So it’s all over, bar two codas, one in, one outside the programme. Shan has escaped, no doubt to make further mischief. She apologetically and almost tearfully has an on-line chat with a mystery individual known only as ‘M'(oriarty) who is apparently responsible for getting her and the Tong into London in the first place (so he’s a Passport Officer, is he?). She’s almost bawling over the intervention of this Sherlock Holmes but promises she won’t fail M again. I am certain, he types as the light of a laser rifle sight wobbles on her forehead (from where?) and we cut to black before we hear the shot.

The other is Zoe Telford. She was excellent in this episode, calm, competent, a strong female presence. And even though Moffat wasn’t writing this episode, she very quickly got reduced to the damsel-in-distress. What a waste.

Incidentally, the hairpin? It turned out it was van Coon who nicked it, having no idea that it was in the least bit valuable, as an apology-present for his secretary and occasional shag, who was using it to keep her hair up in the office…