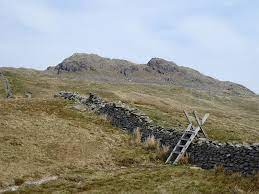 I say that I remember something about every fell I ever climbed, but that isn’t entirely true. Here and there are a couple of fells where I reached the summit but nothing remains of the experience. Little Hart Crag is one of these. I climbed it in the course of a circular walk around the narrow valley of Caiston Beck, Caiston being the alternative name for Scandale Head Pass. I ascended the western ridge, over High Hartsop Dodd, to Little Hart Crags, which I know from Wainwright has two substantial outcrops on its otherwise level summit, and from there descended to Scandale Head in order to tackle Red Screes from the back and descend over Middle Dodd. Four fells in a none too strenuous day, after getting up High Hartsop Dodd of course, but where three of them impressed themselves in different ways upon my memory, all I remember of Little Hart Crag was that I climbed it.