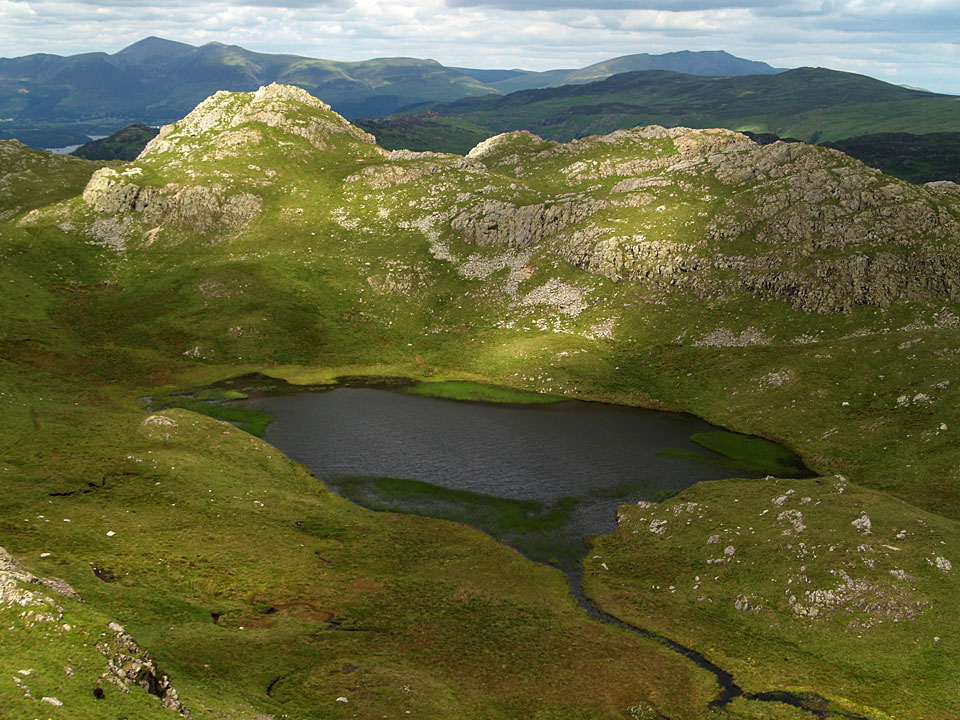 There’s not a lot to say of Rosthwaite Fell, though it’s not in itself a dreary fell, like Mungrisedale Common. It’s just a spur of Glaramara, on the Stonethwaite Valley side of the more substantial fell, with two separate and distinct tops, the lower of which being the actual official summit of the fell. What I was doing, giving this small fell a day of its own during a week away, I can no longer remember: it was not as if the morning had been washed out by rain, or anything like that. I was going via Wainwright’s one illustrated route, towards the mouth of Langstrath, but turning up alongside Stanger Gill, curving behind Hanging Haystack and into that strange upper valley dominated by the array of rock spurs so vividly drawn in the book, and almost miniatures when seen in real life. I remember them, but very little else of the walk. The official summit, Bessyboot, is just over 1,800′ but to the south Rosthwaite Cam was prominent at nearly a hundred feet higher, across the hollow occupied by Tarn at Leaves, whose name is more attractive than the tarn itself. I’d meant to visit the Cam as well, but it was one of those places that looked miles away, across a trackless jungleland, and it looked time-consuming and tiring to force a way there. I can’t remember how I got down now: I don’t think I retraced my steps but if I didn’t I don’t know what route of descent I took. It was into Stonethwaite anyway, because I remember seeing my car come into view, round a bend, and sitting in it to remove my boots, and picking up Radio 4 LW coverage of the England-West Indies test in the Caribbean. Brian Lara was batting, and was nearing Gary Sobers’ all-time record Test score of 366, and I sat in the car for over an hour, as tense as could be, willing him on to make it, and cheering him and pounding the steering wheel when he broke the record, which is why, perhaps, I remember so little of the walking that day, which came second for once.