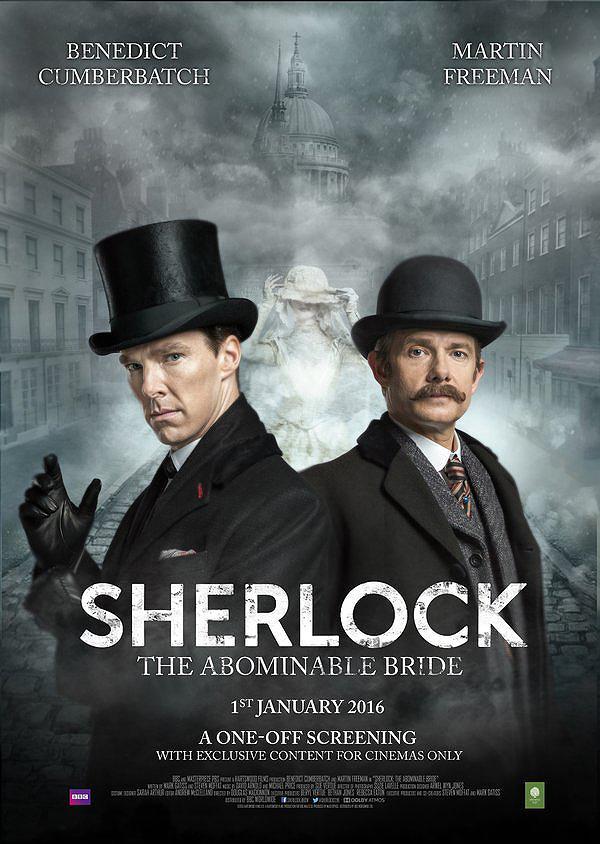 With Benedict Cumberbatch and Martin Freeman’s reputations soaring, it was getting increasingly harder to find the time in their respective diaries to make further episodes of Sherlock. It was impossible to film a full three episode series but there was time to get them together for a single special, for broadcast on New Year’s Day 2016. Here‘s what I said about it then.

There’s not a word of that I would withdraw now which leaves me with the task of what I might say today that isn’t merely repeating myself. Re-watching the episode now, I had the advantage/disadvantage of knowing what was coming, in breadth if not detail, which gave me leisure to contemplate the construction of the story.

Don’t get me wrong, I thoroughly enjoyed it. The very idea of translating the modern interpretation of Holmes and Watson back into the original Conan Doyle creations without fracturing them was ingenious and worth ninety minutes all on its own, and though this time it didn’t makle me laugh as it did before, I relished it immensely. I just wish it hadn’t been pressed into service as a drug-induced fantasy to operate as what was an over-extended bridge between series 3 and 4.

The whole episode is a metafiction. Knowing this now, I was able to see how early the clues were implanted. Mrs Hudson acting out criticism of her role in the Strand stories. Holmes and Watson perfectly aware of the double level of their existence, the Strand version and their real life, a shadow symbol of the entire basis of Sherlock itself. The slightly self-conscious repetition of motifs and incidents from the ongoing continuity. Mycroft as an enormously fat man, sat immovably in a chair, as in the original stories but it was also impossible not to notice that Mark Gatiss’s fat suit basically anchored him down, leaving him barely able to reach forward to grab another plum pudding.

And then the metafictional aspects start flying at you thick and fast and suddenly (yes, it was an hour in, I checked this time and my internal assessment was correct) we wake up and it was all a dream. It’s Sherlock, high as a kite, playing in his Mind Palace, attempting to understand how Moriarty could have risen from the dead by reconstructing an actual unsolved case from the original holmes period, that of Emelia Ricotti, who committed suicide in public yet ‘rose from the grave’ to murder her widower husband six hours later.

The ‘and he woke up and it was all a dream’ ending has rightly had a bad press for at least a century, but we still had half an hour to go, divided between the contemporary Sherlock being regarded with concern by John and Mary, not to mention Mycroft, over his undetailed but obviously horrifying drug consumption whilst he struggles to go back to sleep and return to his Mind Palace, and the ongoing events therein. Now that Gatiss and Moffat have told us it’s all a dream, the Victorian story can be steered off the rails, its internal reality and consistency abandoned and it can start to get silly. The blatant and unsubtle appeal to feminism comes over this time as perfunctory, button pushing, and the knowing and cynical Reichenbach Falls ending as classic in-joke territory: aren’t we so fucking clever? Though I relish Andrew Acott as Jim Moriarty as much as ever: the biggest mistake the series made was to kill him off.

The last half hour, though it still has its merits, is conspicuously inferior to the first hour, for the very simple reason that infects the entire run: it’s clever, very clever, but it’s too damned in love with its own cleverness. Telling a story has become a distant second with proving to Gatiss and Moffat how clever they are. It’s symbolised in the knowingly clever but completely unnecessary CGI tricks played in this episode.

That the show is clever has been obvious from the start but, as I have said several times before, unless it is very rigorously controlled, cleverness’ inherent weakness is that it desires to get cleverer and cleverer all the time, outdoing itself continually until topping itself becomes the focus instead of the added extra ingredient. Watching ‘The Abominable Bride’ a second time, for all that I enjoyed it, I couldn’t help but notice the clever bits, the ‘look at us’ moments.