It’s that time of year again, when Professor and Professora Foglio take to Kickstarter to fund the next volume (no 15) of Girl Genius.

This is the second volume of Act 2 of this epic and highly funny story, The City of Lightning. Seeking to free her city of Mechanicsburg from the time-stasis it has been trapped in for nearly three years, Agatha Heterodyne and her band of trusted colleagues arrive in Paris, seeking permission to examine its extensive and rare underground libraries. Meanwhile, Gilgamesh Wulfenbach, Baron of the by-now crumbling Wulfenbach Empire, is still, slowly, painfully, extracting individual figures from the city, but still unable to get close enough to his father, Klaus, who has created the time-field as a means of keeping himself free from the influence of The Other…

This is the link, go and treat yourself. There’s twenty days left and the funding goal is already $12,000 behind and counting, but get in ahead of time. 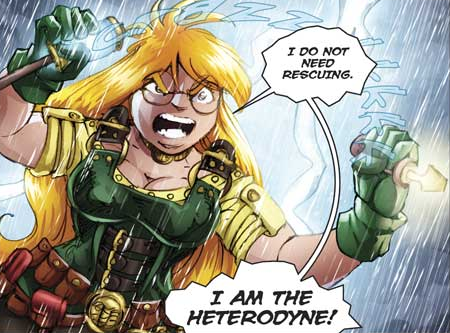 Back in April, I flagged up the Kickstarter for the latest Girl Genius collection from Phil and Kaya Foglio, and this has duly arrived today. Entitled The Beast of the Rails, this is the fourteenth volume of the series, and the first of Act 2. I’ve been enjoying starting to read this in collected form, as opposed to last year when I read it three days a week on the Girl Genius web-site, which can be found here.

Until that moment when I suddenly flashed what has to be termed The Cold Equation, after a very famous pre-World War 2 SF short-story.

Act 2, or, The Second Voyage of Agatha Heterodyne, is intended to be the middle act of the entire Girl Genius story. Though the Foglios have not committed to anything definitive, the impression has always been given that each of the three Acts will be of roughly similar lengths. Utilising the skills in basic arithmetic that once scored me a Grade 2 at O-level, round about the same time The Who were in the Top 10 with ‘Won’t Get Fooled Again’ (a classic, a true legend), I calculate that three Acts of 13 volumes adds up to 39 all told. Meaning that there are further 25 to follow.

The Foglios collect a volume every year. That makes it pretty easy to work out that the Girl Genius story will not be complete, i.e., won’t reach the ending, for another 25 years.

Phil Foglio, it transpires, is almost exactly six months younger than myself. Fortunately, there is a tradition among American comic book artists of living well into your late eighties and even your nineties, which is all very well since Mr Foglio will need to do so if he ever hopes to complete Girl Genius. But what about me?

As things stand, in order to read the end of this story, which I have already been following since its debut in 2001, I am going to have to live until the age of at least eighty-four. Now I’m not going to start going into details but I have strong reasons to suspect that I probably won’t get there. It’s not like I’m looking at any preset limits, and my paternal grandfather did live to the age of 88, but take it from me, the odds are tilted in the wrong direction.

I am therefore reading and collecting a story that, in all probability, I won’t get to finish. I’ve only just realised that tonight. Heh heh.

So, if the Professororae Foglio happen to be reading this, I hate to put pressure on you, but if there’s any chance you could speed up a little, sort of, double, maybe? I think I can hang on for that. If you don’t mind. I am really enjoying this… 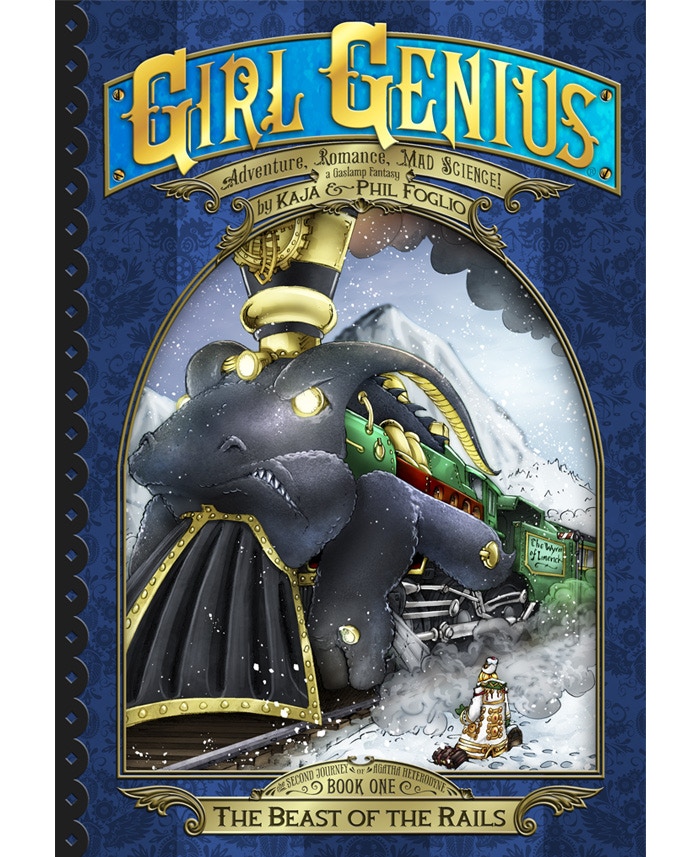 It’s the annual Girl Genius Kickstarter plug, this time for the first volume of Book 2.

Agatha Heterodyne has successfully completed her transition from hapless, headache-prone student to establishing herself as The Heterodyne, Mistress of the family town of Mechanicsburg. But Baron Wulfenbach has frozen the town (and himself) in time in an attempt to nullify the menace he sees from Agatha. Everything has changed across Europa. The Wulfenbach Empire has lost control. Gilgamesh is under a strange form of control from his missing father. And Agatha has set out for Paris, to seek aid in freeing Mechanicsburg. Others have different plans for her…

There’s sixteen days to go and already the project is 98% funded (the last one was 398% funded, so you know it’s going to happen. This is the link, so get out there and treat yourselves. This is the funniest, most wide-ranging series going, a Gaslamp Fantasy offering Adventure, Romance and Mad Scientists!

It’s Kickstarter time again, and this time it’s for the latest Girl Genius collection, Volume 13 to be exact, Agatha Heterodyne and the Sleeping City.  Use the link to go to the Project and pledge!

Now, as cultured people with a broad appreciation of the finest arts and narratives, you undoubtedly know all that needs to be about Girl Genius, including the fact that it appears thrice weekly at the Studio Foglio site. This link takes you to page 1: just keep pressing next. For those who may be hazy upon the odd detail here or there, let me remind you that Girl Genius is the work of veteran sf artist Phil Foglio (pronounced ‘folio’) on art, Phil and wife Kaja Foglio on writing and Cheyenne Wright as colourist. It is an epic, sprawling, complex, hilarious story involved a cast of several dozen (including a talking cat), which is tecnically a historical document, issued by two Professors of Trans-Polygnostic University, concerning the life of the titular character, Agatha Heterodyne, Girl Genius.

The Foglios present their work as a Gaslamp Fantasy, placing it pretty near to the SF genre of Steampunk, but tons more dramatic and funny.

Volume 13 contains approx 180 pages of full-colour art, of ‘Adventure, Romance and Mad Science’. It completes Act 1 (of three) of the Girl Genius story, and believes me people, it ends on one helluva cliff-hanger!

Get in on this, because it’s good, and treat yourself.

Target is $55,000.00 by 2.00am (British Summer Time) on Saturday 3 May, and at the split second of writing this, £28,607.00 has been pledgedby 420 backers, myself included (there have been five new backers whilst I have been writing this sentence). You can pledge as much or as little as you decide, and there is a list of rewards given for each successive level. For a copy of the book itself with a signed bookplate and computer wallpaper, you need to pledge at least $30, plus additional p&p for backers outside the United States. And if the target isn’t met by the end-date, you pay nothing, though there’s not a lot of chance this will fail.

Be good people, back this venture. The book is reward in itself, without the little inner glow of being one of the Good People.

I’ve been meaning to write about Girl Genius for a long while. It’s been around since the turn of the Twenty-first century, if you can remembe that far back, and co-writer/artist Phil Foglio’s been around for at least twenty years before then. Girl Genius started as a bi-monthly comic but, after eleven issues, went web-only, with new pages appearing every Monday Wednesday and Friday. The whole lot is available on-line at Airship Entertainment, the site run by Phil and wife/co-writer Kaja Foglio. Here’s the link to page 1: http://www.girlgeniusonline.com/comic.php?date=20021104  Just keep pressing next.

The Foglios describe Girl Genius as Gaslamp Fantasy, and it is indeed a steampunk world, an alternate Victorian Europa of Mad Scientists hair-raising adventures, Intrigue and Romance! There’s an ever-expanding cast and multiple stories, back-stories, mysteries and misunderstandings going on all over the place.

So far, the Foglios have collected the series in eleven full-colour, slightly over-sized volumes, each containing between 128 and 192 pages of the story, over 2,000 pages of adventure, excitement and continual jokes. Now it’s time to publish Volume 12, and the Foglios have turned to Kickstarter, to fnd not only the publication of the book, but also the reprinting of other volumes that are in danger of vanising out of print.

This one’s not as urgent as the recent Rick Geary book, as the Foglios have passed their target by a goodly margin already, and with 16 days to spare.

But I still urge you to get in there, support the cause, and treat yourself to a mammoth and mammothly entertaining epic, in which volume 12 is really just the end of Act One. This is  one that’s worth catching up to – those 2,000+ pages are worth the read.

Here’s the link to the Kickstarter page: http://www.kickstarter.com/projects/girlgenius/girl-genius-volume-12-printing-and-reprint-frenzy.  As usual, there’s different levels of reward for contributing and I’m sure there’ll be one for you.

Roll on September, and the published book: there are 63 completed pages of Volume 13 as of today, you need to catch up.