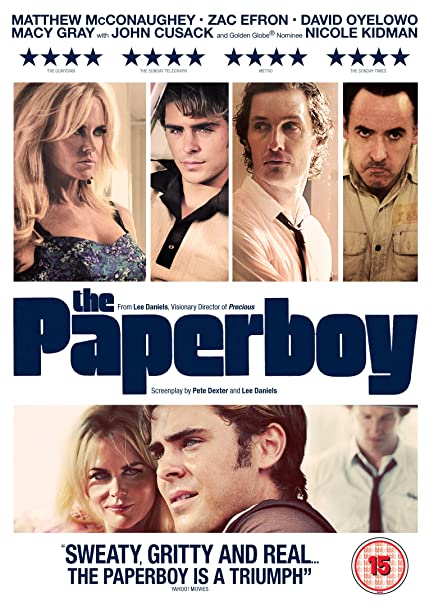 Either this wasn’t a very good film, or I wasn’t in a very receptive mood, or both. I think the correct answer is both.

I’m not at my most receptive right now. I’ve just undergone three days intensive training in a new discipline, about which I’m always apprehensive, via a computer screen that has left me exhausted and it coincides with a one day weekend, so I’m not at my sharpest, which is, of course, the ideal circumstances for viewing a film whose storyline is as straightforward as a drunken crow flying.

Amazingly, The Paperboy came out as long ago as 2012. I remember it then for the publicity shots of Nicole Kidman, playing very much against type as a fortyish white trash woman who’s fallen for a prisoner on Death Row. We are not talking the epitome of delicacy and grace here, in fact we are talking about the kind of role whereby OTT falls unforgivably short. But I remained curious and when the DVD popped up cheap in a charity shop, I decided 50p was not excessive for a morning’a gawping.

In fact, Kidman is by far and away the best element of the film and I’m not merely talking about how hot she looks (which she does). She arrives out of nowhere in a pink dress displaying lots of thigh, struggling with two box files and sweeps the film away with her. Apparently, she spent the whole filming process in character and the consistency shows. She’s a walking force of nature, untouched by any sense of remorse or apology for who she is. Against her, despite the film’s attachment to grime, squalor, spite and all manner of things unclean – sweat, piss, jizz, blood in the words of Warren Zevon – everything else is ever so slightly cardboard cut-out.

The story is set in Florida in 1969 and uses Macy Gray as a narrator through the device of her telling the story to a writer researching a book. The story is that idealistic Miami Times reporter Ward Jensen (Matthew McConaughey) returns to his home town, where his father Ray edits the local paper, to investigate a seeming miscarriage of justice four years earlier, in the murder of the local hated Sheriff. Rather than the usual set-up of a black railroaded through racist attitudes, which do exist here, the sentence lies on poor white trash Hilary van Wetter (John Cusack). Ward is paired with English writer Yardley Acheman (David Oleweyo), who hates the place on every level and is consequently a stuck-up pain-in-the-arse, whilst the ‘team’ is completed by Ward’s younger brother Jack (Zac Efron), a fuck-up who is an irritant of the first water. Jack, unsurprisingly, falls in love with Charlotte: that’s Kidman, Charlotte Bless from Alabama, in love with and engaged to be married to Hilary despite having never met him.

It’s another measure of Kidman’s performance that she can instantly and concentratedly be so crude and yet remain a sympathetic character. Certainly nobody else is. Ray’s a hypocrite. Ward’s a drunken homosexual with a thing for sucking black cocks and being beaten and cut. Yardley’s a self-centred bastard who makes up ‘evidence’ that acquits Hilary before signing a book deal and buggering off to New York. Jack’s a fuck up who falls head over heels for Charlotte and blindly sticks to his romance in the face of her honesty about there being literally no future to it (her only seriously wrong step in the film, apart from being in love with Hilary, is to agree to fuck Jack as a one-off, although the circumstances were exceptional).

And Hilary is rotten to the core. Released from jail, he turns up at Charlotte’s place in Alabama and fucks her violently with no thought for anything but his own release, before taking her off to the swamp, despite her unwillingness.

Like I said, the story takes no straight lines. The camerawork matches it visually, jumping and jerking about in all sorts of directions. Apart from categorising the story as slice-of-life, portraying an existence I would never want to experience, even if Nicole Kidman was offering to live with me in it, I cannot really discern a point to this film. What’s it about? Damned if I know.

Anyway, at the end, Jack and Ward go to see Hilary and Charlotte in the swamp. She’s supposed to be coming to Ray’s wedding to the unpleasant Ellen but instead Hilary has killed her, offscreen. He cuts Ward’s throat with a machete, pursues Jack for long, meaningless minutes before Jack gets the bodies out of there as evidence, Macy Gray confirms Hilary went to the electric chair for it and that’s the end of it and do we care or even notice? No.

I’ll keep the DVD for Nicole Kidman but for no other reason. It just isn’t good enough on any level except hers.