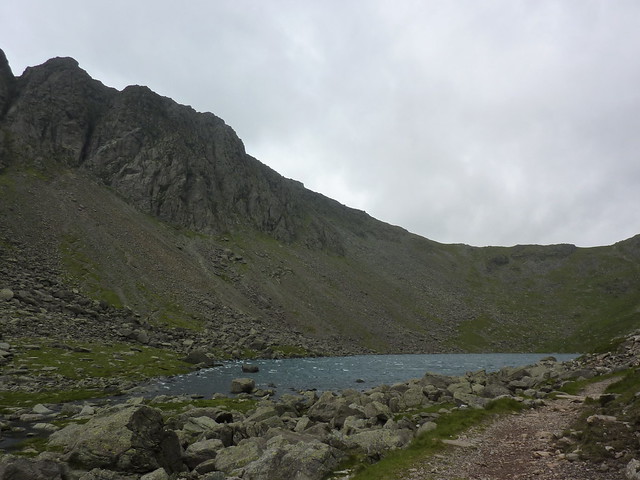 The Old Man above his Village

Before the restructuring of Local Government in 1974, the Lake District was divided between three of the ancient shires of England. These were Cumberland, which lent a variation of its name to the new integrated region, Westmorland, which was cleared from the map, and Lancashire, in the form of the Furness District, otherwise known as Lancashire-across-the-water, the water in question being Morecambe Bay.
The boundaries between the three counties met at the top of Wrynose Pass, as commemorated by The Three Shire Stone, with the county boundaries proceeding along the Duddon Valley to the south west, and the Brathay Valley in the east. Lancashire’s only range of fells was the Coniston Range, and their highest point, Coniston old Man, was thus the highest point in Lancashire.
But these days are long gone. The undistinguished Gragareth serves as Lancashire’s highest point now, a highest point impossible to detect on its flat and featureless top, whilst the Coniston Range remains among the most popular walking destinations in the Lakes.
Geographically, the Coniston group is built around a central, north-south ridge linking the two highest peaks, the Old Man in the south, and Swirl How in the north, with outliers to each side. Swirl How is the geographically significant fell in the range, with ridges spinning west, north and east from its neat, uncluttered top, to the south, an outlying spur to the west of the Old Man leads to the group’s finest cliff-face and its sharpest summit.
At first description, it would seem that to devise a walk that covers all the seven summits in the range in a single day would be an artificial thing, full of back-tracking. However, the proximity of the outliers at the northern end of the ridge, and the sheer bulk of that eastern outlier, Wetherlam, which runs to three southward ridges itself, enables the walk to be planned as a circuit of Coppermines Valley. In this manner, there is the barest minimum of walking over trodden ground during the day, and that towards its end.
The walk has to be based upon Coniston Village, where parking is easy to be had (and I am not going to reveal where free road parking can be found, in case you fill it up before I can get there).

The mouth of Coppermines Valley, surrounded by high fells

Coppermines Valley is reached along the lane at the side of the White Horse, which rapidly changes from tarmac to rough, land rover track, until the path begins to rise among trees, climbing to the mouth of the valley. Land Rovers, and cars with top notch shock absorbers can make it this far as the former miners cottages just inside the valley have been converted to holiday homes. The path turns away from them in disdain, climbing back upon itself to a platform from where the lake below first comes into sight. Here the path doubles back once more, and before long it can be seen angling across the rising fellside, making for a deep fold in the ridge a half mile distant.
Ahead, the deep trench of Coppermines Valley shows ample evidence of the mining and quarrying activity of centuries, and Wetherlam’s Black Sail ridge drops steeply into the valley, offering another potential route of ascent.
The current walk lies on the flanks of the Yewdale Fells, those splendid ramparts that look so impressive above the northern approaches to Coniston Village, but which are no more than a facade for the indefinite ground at the end of Wetherlam’s longest and loosest ridge.
Follow the path into the notch in the ridge. This, if followed, descends to Tilberthwaite, in its quiet valley, but when a track splits off left, crossing the little trench, transfer to this. In a short distance, it starts to climb upwards, onto the broad end of the Lad Stones ridge.
The ridge is primarily broad and grassy in its lower section, but there is a decided change in texture halfway up, as rock increasingly comes to litter the way, until the wide, untidy top comes underfoot, and the first north and westward views of the day come into sight, the Scafells being the centre of the picture. The unruly cairn is close to the steep edge overlooking Little Langdale and care should be taken approaching the lip of the summit to maximise the downward views.

From here, the walk turns west, following a well-walked, surprisingly narrow in parts path, which crosses behind the subsidiary Black Sail summit. A short diversion can add this to the walk with a small expenditure of energy, but bear in mind there are many miles to go.
The path descends steeply to the narrow col of Levers Hause, from where an easy return to Coniston can be made, left, through Coppermines valley, if this were necessary. Ahead however is one of the highlights of the walk, the steep, hands on rock ascent of the Prison Band, a series of rocky towers leading almost the whole way to Swirl How’s top. There will have been ample opportunity to study this on the descent, together with the easier path to its right, which offers a steep ascent without undue excitement. Having done both on different occasions, I have to point you to the rock.

Swirl How’s neat, uncrowded summit allows you to see the range almost in full, and to appreciate its geographical importance. The main ridge heads south, but Great Carrs and Grey Friar loom close at hand, and a simple study of the ground suggests that the next hour or so need not be a series of there and back again ridges.
Great Carrs, curving around the unfrequented valley of Greenburn Beck, looms close at hand. Wainwright describes the walk around the valley head as a seven minute stroll, and I am proud to have matched that timetable on two widely separated occasions. Admittedly, there is little sense of achievement associated with this crossing: the fell deserves an ascent across its own footprint at some point, to be properly enjoyed.
There is no need to return to Swirl How: from the lowest point of the depression, contour across right and down to join the long, straightforward downhill track onto the wide plateau of Fairfield, or just aim directly for it anyway, the ground being free from danger. Beyond, the track rises to approach the square top of Grey Friar. Apart from its spectacular view of the Scafell Range, there is little to commend the fell, though a decent walk can be made of the ridge from the Duddon Valley. Simply tick it, off, relish the view, and return to Fairfield.

It may be thought that an ascent back to Swirl How is now needed, with the fell looking like a green wall, but a well-engineered path curves away from the plateau to the south, maintaining a level contour around the head of the valley containing Seathwaite Tarn. The path encourages striding out with no effort, with the Tarn slowly curving into view as the valley opens below. there’s a point at which the path suddenly disappears, overrun by a wet patch of indeterminate width, but simply walk up the fellside about fifteen feet and a parallel path enables progress to continue.
It looks like the level route will take you to Levers Hawse, the lowest point on the ridge, and if you wish, conserve energy by going all the way. A better option is, when the upthrust of Little Gowder Crag comes level on the skyline, and the Tarn is in full view, zigzag up the fellside in wide sweeps, and gain the ridge for the rest of the walk. The openness, and the scramble over LGC are worth it.
At Lever’s Hawse, the broad path starts to rise again, crossing the broad back of Brim Fell. There is a tiny cairn on its flat top, but otherwise nothing to hold the interest, so march on, crossing the shallow dip in the ridge and follow a similar path up the wide northern side of Coniston Old Man, the highest point, by the odd couple of feet, of the day.
Where Brim Fell offers nothing to delay the walker, the Old Man’s top is a place for rest, contemplation and, in amongst the crowds, perusal of the views, which extend south as far as Blackpool Tower, which the more tripper oriented among the crowds will be actively straining to see. The true walker’s eyes will be fixed due west, upon the magnificent cliffs of Dow Crag, the final summit of the day.

There is no direct route possible, thanks to the deep trench holding the invisible Goatswater between the two fells, but the walk around the hollow of the tarn is easy throughout. Tired walkers will no doubt debate the wisdom of walking westward when Coniston Village and the car lies due east. This is the wisdom of doing this walk anti-clockwise: the leg-weary walker will be infinitely more enthused at adding to the miles to cross Dow Crag than he or she will for Grey Friar.
Retrace steps a hundred yards or so and take a route curving down to the left, across the flank of the Old man and onto the wideness of Goat’s Hause. The ascent on the far side, swinging around behind the fearsome crags, is without difficulty, although the highest point is, like such fells as Helm Crag and Harter Fell in Eskdale, achievable only by a short rock climb. First time visitors will feel obliged to complete the walk: those who have already scaled Dow Crag have the liberty of conscience to stand as close as they can to the final upthrust and call the job done, in the interests of aching legs. Continue along the declining ridge, rising at intervals to cross the lower tops of Brown Pike and Buck Pike, before descending finally to the summit of Walna Scar Pass.

There has been enough opportunity in the final stages of the descent to see that the summit of Walna Scar fell lies only a few steps above the short green slope south west of the Pass. Walna Scar is not part of the Coniston Range, nor even in the Southern Fells, but it does feature in the Outlying Fells, and indeed is the only top in that volume to exceed 2,000′. Peak baggers will be tempted, but anyone having the excess energy to spring up this final slope should be subjected to steroid tests on the return to the Village.
Instead, turn thankfully east, negotiating the initially steep and, when last walked, extremely eroded upper section of the Pass. Gradually, the slopes level out, to cross the wide expanse of Cove Moor, by Cove Bridge. Beyond, the way is crossed by a profusion of routes, on the popular walk from Torver to Goatswater and the Old Man. Banishead Quarry, with its spectacular waterfall, is only a short distance downhill, but most walkers will have their sights set on the long tramp back. The Walna Scar Road descends gently between a pair of rock gateways, passes the shy, reedy Boo Tarn, at the foot of Wainwright’s favourite ascent of the Old Man, long since buried under the expanding grounds of Bursting Stone Quarry, and culminates at the parking area at the top of the narrow fell road down into the Village.
Unless a lift can be hitched from a departing driver grateful for you holding the fell-gate open for them, march on in what will hopefully be early evening sun, lit by intimate views of the country below the Old Man, and the unusual rib of the Bell, before arriving in the Village by the road next to the long-closed station.
If the Coop is still open, grab an ice cream bar. If the day has been hot, grab two: the first won’t even touch the sides.