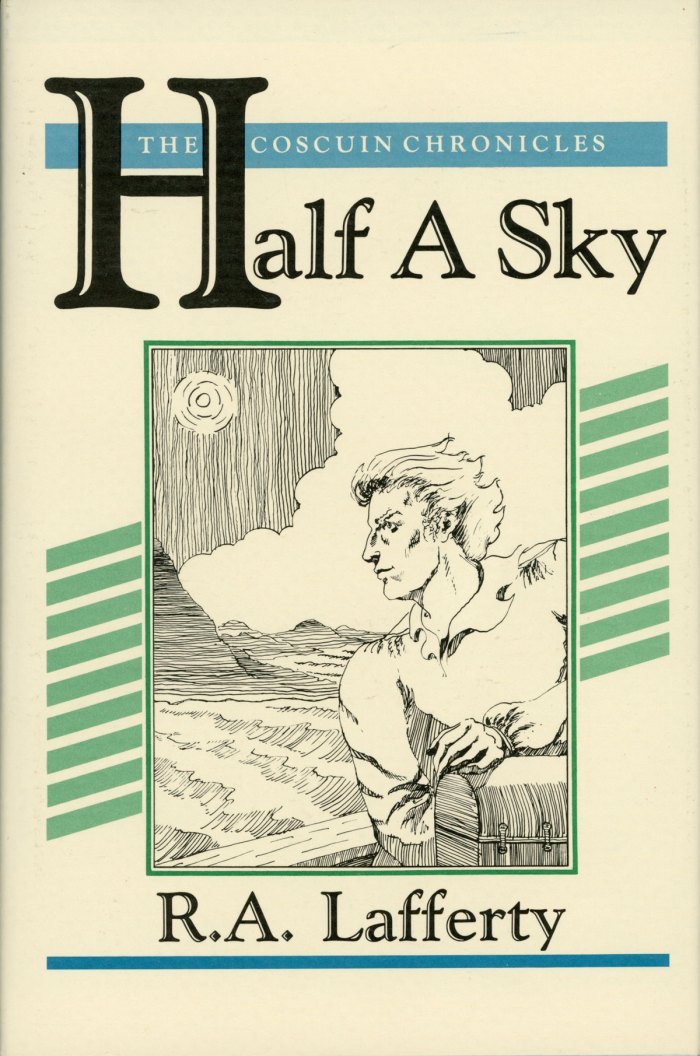 And thus we return to the Coscuin Chronicles, in its second, and last-published to date of four volumes, published only by Corroborree Press in the Eighties, at which time I bought it, not reading The Flame is Green until well over a decade later. Half a Sky is another of the listed unpublished novels in Archipelago, though its two sequels do not appear on that remarkable page: I hope this does not mean they never were written.
Half a Sky resumes almost from the moment that The Flame is Green leaves off. Dana Coscuin has come to Amsterdam, where the company of the Green Revolution is to go its separate ways. Dana and Charley Oceaan, the black man from Basse-Terre (which we already know, from another chronicle, is the location of the Earthly Paradise) are to set sail for the latter. The next phase in Dana’s battles is to take place in South America, in the land under half a sky.
The others are to disperse, to carry on their tasks in different parts of Europe, but there are ambushes, woundings, a threat of assault and, in the case of Kemper Gruenland, murder.
Basse-Terre is a homecoming for the Dana, who has never before been there. But it is the place of the Home of Dana Cosquin, and the Tomb of Dana Cosquin, and before this part of the story is over, it will provide the Bride of Dana Cosquin.
For Dana is to have new allies in the next phase of the Green Revolution, which will cover the years from 1849 to 1854. Chief among these will be Damisa the Leopard, an African so named for his mottled flanks that give the look of both leopard and leper. He will have the same old enemy, Ifreann Chortovitch, not dead as killed by Dana, but returning to life despite the Dana’s refusal to acknowledge him, and his insistence on treating him with disdain when he is forced to accept Ifreann’s presence.
And Dana gains another ally, in the form of the ship he acquires, and which he names the Catherine Dembinska, after his murdered wife, for the soul of one is the soul of the other, and Dana treats the ship as a reincarnation of his love.
As before, Lafferty’s grasp of political details, personalities and people in the South American republics is comprehensive, enabling him to refer both directly and tangentially to movements in which Dana and his company become involved, ensuring that the Green Flame is held high in these years and the Red Revolution is thwarted as they should be.
There are again magical things treated as utterly natural: Dana travels with a child’s coffin that contains not a body but rather gold coinage, more than could ever be contained in so small a box, and an everlasting supply of coins and other things that the Dana needs from time to time. This includes the Testament of Kemper Gruenwald.
And the Company comes to include a young woman, Serafino, who, despite all discrepancies of age, and genealogy, is still in some way the daughter of Dana and Catherine Dembinska.
It’s not until the last couple of chapters that Lafferty starts to work with concrete elements of the story. The first of these is the deposal of Argentinian Dictator Juan Manuel de Rosas. This is an unusual chapter. History records Rosas as a prototypical brutal Dictator, and Lafferty accords with this whilst at the same time setting him up as not as bad as he is being painted, and, more pertinently for the novel, infinitely preferable to the liberal/socialist Red Revolution in Banda Orientale (the then-name of Uruguay), who want him brought down.
Dana sets out to bring Rosas down, against the wishes of everyone, especially all those in his Company. He is condemned as traitor, as renegade, faces opposition from every quarter, but brings about what he wishes: Rosas’ overthrow by his friend and fellow Governor, Caudillo, with Rosas going into lengthy exile.
To achieve this, he has to overcome the opposition of Caudillo himself, but it is done, and Dana redeems himself by pointing out how he has secured at least a decade of stability, by outflanking the Red Revolution: instead of weakness in government that they can exploit, they face another Leader in Rosas’ model, but less compromised.
It’s a convoluted chapter and solution and not one I completely comprehend without more detailed historical knowledge. But it is almost the last action of the book. The final two years of Dana Coscuin’s time under the world of half a sky is brushed past with no detail, bringing the Dana back to Basse-Terre, to marry the Bride of Dana Cosquin, alias Angelene Domdaniel.
For Dana it is the end of his journeying. He will remain with his Bride, and their child to be, and never leave again, notwithstanding the summons of Count Cyril to return to Europe. Not unless Angelene herself tells him to go… and of course she is the messenger.
But Dana and his crew cannot leave without a final (for this book) confrontation with Ifreann, and this is the ending for the Catherine Dembinska. The spirit of the dead wife leaves the ship, which dies in terrible explosions, coming up against Ifreann’s more powerful vessel, the Porte D’Enfer. And Dana and his last companion, Jack Gadalope, take to the sea with their knives, to swim ninety-five miles to port, and then to Carloforte.
Carloforte would take Dana Coscuin and his part in the Green Revolution to Sardinia. The dustjacket identifies the third Chronicles to be Sardinian Summer, to cover the period from 1854 to 1862, with the final book First and Last Island dealing with 1862 to 1872. We assume these books to have been written, but we don’t know if this is the case, or if they were finished. This is the end of the Coscuin Chronicles in time. They may continue outside of time.