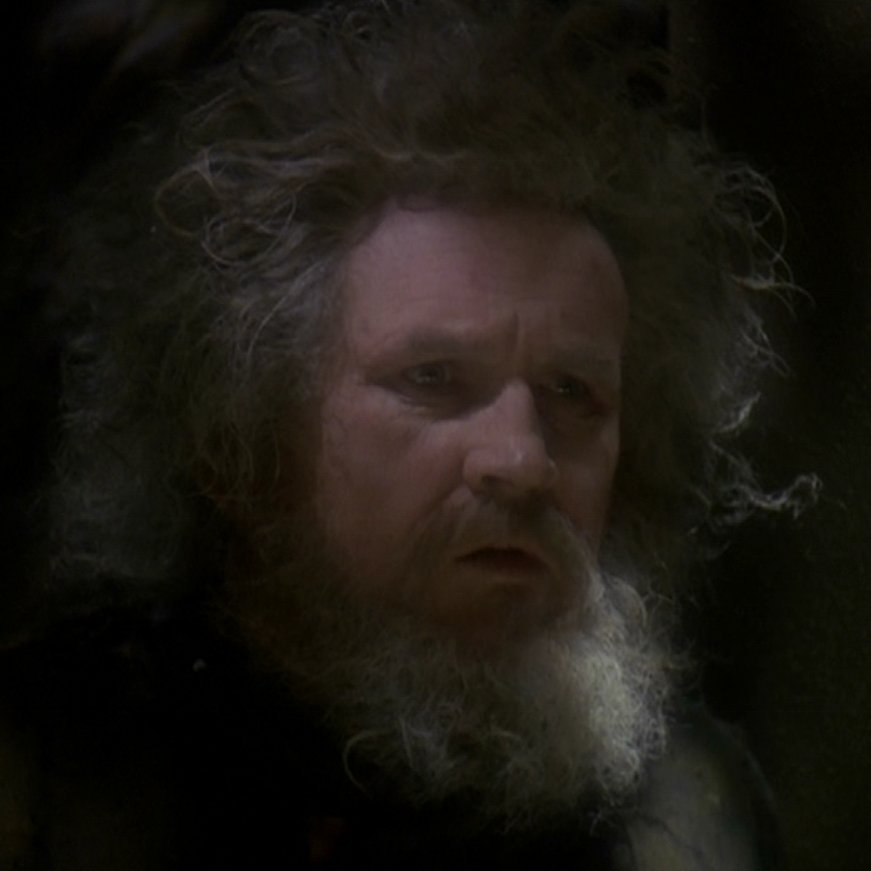 Though there was a point, about halfway through this week’s episode, when it felt as if things were moving a little too slowly, this was once again an excellent episode. My regular commentator, Astrozac, has referred in the past to DS9‘s tendency to dump on Chief O’Brien, and this was a prime example, but to a good and serious purpose.

The open showed us a ragged, wild-haired, bearded man, patiently drawing a geometric pattern in the too-smooth sand of an artificial floor. It quickly became clear he was a prisoner, especially when some kind of ray swept the floor clean, and from the way the camera was careful not to let us see his face, it was obvious he was one of the cast. But not until he was released by his captors, the Agrathians, do we learn that this is Miles, and that he has been in prison for twenty years.

In a clever twist, we learn that the Chief has been in prison for twenty years in the space of a few hours: the Agritheans build their prisons in the mind, not on Dartmoor. O’Brien may have been unconscious for a few hours, charged and convicted of espionage just for asking a few innocent questions, but in his own mind he has been in solitary confinement for twenty years, with all the effects of a ‘real’ sentence.

That’s what Major Kira, who has been sent to collect him, can’t get. She can’t equate her few hours to O’Brien’s twenty years and can only emphasise that it wasn’t ‘real’. Even when O’Brien is in subdued raptures at the sight of DS9 after all this time – some spectacular shots of the station from different angles – she doesn’t get it.

Doctor Bashir does, and so does Keiko. Both know that for O’Brien it has been twenty years, and since the implanted memories can’t be uprooted without a total memory wipe (coincidentally, a subject being faced in current episodes of iZombie), O’Brien needs the same kind of care, adjustment and counselling as any ex-inmate.

But he’s resisting. He’s fine, he just wants to be left alone, to go back to work, this counselling is a waste of time, he wants to forget, not remember. Some part of this is O’Brien being O’Brien, solid, no-nonsense, hard-headed. He’s the only member of the cast with whom this response would be immediately plausible. However, we know that it’s more than that. The form of the story demands it, and we have already been privy, through the first of a series of flashbacks, that although the Chief claims to have been in solitary confinement, he was, from the first, confined with a cell-late, Ee’char (played by guest Craig Wasson with a kind of gentle acceptance of his plight).

The nature of this kind of story is that there is something the prisoner is concealing, something that fills them with a great guilt, that they have to keep hidden, and the key to their eventual recovery is exposure of this secret, without which they can’t begin to heal. To that extent, you might say that the episode followed a fairly predictable line. The Chief can’t settle. He won’t go to counselling. He’s uneasy, prone to flaring up at no real provocation.  Unsurprisingly, since we know from the first that it has something to do with Ee’char, he’s having hallucinations of his fellow prisoner popping up all over DS9.

I say this is a standard construction, and as a one-off play it might very well fail for predictability. But this is part of a long-running series, and we are invested in these characters. O’Brien’s growing rage and frustration is but the superficiality: Colm Meaney conveys the underlying shame that powers the rage, shame and fear.

The crisis comes in an easily predictable fashion too. O’Brien is suspended from his post, ordered on Medical Leave, blows up in rage at the ever-patient Julian (an equally excellent performance by Alexander Siddig, radiating understanding, patience and determination to see his friend through), and hits rock bottom when he blows up at Molly, and threatens to hit her, though this last bit was fudged a little, since O’Brien only raises his hands when he talks about it after, not in the scene itself.

After venting his rage in a slightly cheap display of violence against a perfectly undeserving cargo bay, O’Brien amps a phaser up to max and sticks it under his chin, which is where Julian finds him, as does the illusionary Ee’char. Only now does it come out: a fortnight before the end of his ‘sentence’, starving after not being fed for over a week, O’Brien discovers that Ee’char has been hoarding food he’s concealed from his celly. The last vestige of civilisation, the evolved human who has left rage and hatred behind, is stripped from him: O’Brien kills Ee’char for the food, before realising that there was food for two.

And O’Brien is conscious that, in that moment, it wouldn’t have mattered who stood between him and the food. It might have been Julian Bashir, and Miles O’Brien would have killed him. He is in his own eyes unclean, a dangerous primitive: He killed his friend and his crime demands punishment.

In accordance with the dictates of the form, once the secret is spoken, its power is diminished. Bashir is able to persuade O’Brien that he isn’t defined by one moment, extorted under extreme and grievous pressure, forced at the very end of twenty years, and O’Brien’s relief, and the knowledge that he hasn’t forfeited anyone’s respect, and most especially his family’s love, is the basis for healing,  which can now begin.

Needless to say, whilst watching this episode, I wasn’t rating it at all by reference to this formula. It dragged a little in the middle, with the rest of the cast filing in and out, one by one, to earn their salary with micro-scenes that were almost amusing in their brevity, but the performances by the central quartet (Meaney, Siddig, Wasson, and the ever-delightful Rosalind Chao) kept me involved beyond the analytical, and it turned out to be another fascinating episode, in a series that is weekly living up to the high standards those more familiar with Deep Space Nine keep promising me.