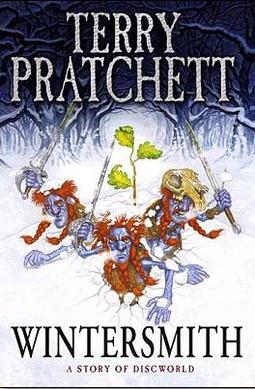 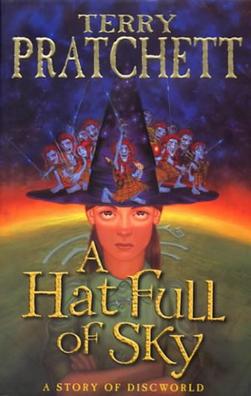 The original idea behind the Young Adult Discworld series had been perceived as a run of one-offs, set away from the main body and the main characters and settings of the Old Adult series. The revelation that Pratchett had at least toyed with another Maurice book, this time as a ship’s cat, seems to support this notion, but A Hat Full of Sky torpedoed it for sure. We now had a Tiffany Aching series to, ultimately, supersede that of the Three Witches.
Two years have passed since The Wee Free Men (as they had in real life). Tiffany was now eleven and about to leave home for the first time, to enter the service of Miss Level, a witch over towards Lancre, where she expects to learn all about magic and how to use it.
In fact, it’s very much the opposite: Pratchett has made this point many times with both Witches and Wizards, and it’s the one that’s always hardest for the young and eager to learn, which is how not to use magic. Which Tiffany finds both frustrating and easy.
A Hat Full of Sky is actually a very conventional, almost commonplace children’s witch story. Tiffany’s frustration at the lack of direct instruction escalates steadily until she goes off the rails, making exactly all the mistakes that she should be learning not to make, with dire consequences that require the intervention of a senior, and much more powerful witch to show her how to correctly use her powers to resolve the mess she has created.
There’s also the traditional first meeting with her peers, the other would-be witch girls of varying degrees of competence, of course led by the noisiest and most arrogant girl, who thinks she already knows more than everybody else and that her conception of witchery – one hundred and eighty degrees away from the truth but attractive temporarily to the heroine who has not yet learnt better – is the only possible method.
But though Pratchett is using only the most tried-and-tested of materials, that’s merely the framework for the story. Tiffany’s going-off-the-rails moment is less her fault than an issue that arises out of too much natural magical ability and insufficient training. In order to get around a lack of mirrors, she’s invented a spell that gets her out of her own body, a variation on Borrowing that renders her vulnerable to the hiver, a kind of compound mind that seeks bodies in which to hide itself, immediately releasing all their inhibitions.
It’s a necessary Rite of Passage for Tiffany, who commits two very serious crimes when she no longer has her sense of self-restraint, and her strength lies in understanding that she is directly responsible for the actions she takes, since they come from her desires and her desires only, but also that she is now, in a sense, inoculated against temptation and the future risk of becoming a cackling Witch.
And it’s all down to Tiffany, though a lot of it is due to the effective channelling provided by Granny Weatherwax, and even some to the determination of the seemingly hopeless Petulia Glum, a semi-promising pig-Witch to be who, despite her hesitancy and her insubstantiality, aligns herself with Tiffany simply because Tiffany needs help.
The section with Granny Weatherwax, during which Pratchett articulates even further the role of witches as edge people, is surprisingly long: with the exception of the long short story, The Sea and Little Fishes, it’s the longest sequence of Granny that we ever see this side of Carpe Jugulum. And it’s beautifully played in every moment.
Of course, one can’t ignore the Nac Mac Feegle. There’s a new Kelda, Jeannie, and before the end there’s the first Feegle babies, helping to root this Clan into the Chalk, but Jeannie herself has a rite of passage to go through, starting the book by showing jealousy towards Tiffany, who she sees as her rival, however inappropriate the thought may be.
Despite the desperate situation in which Tiffany finds herself, A Hat Full of Sky is still very much a Young Adult Discworld book. There’s a lightness to it, a lack of detail that betrays the fact that Pratchett is aiming at a lower forehead level than usual. Like it’s two Young Adult predecessors, this is seen in the size of the original volume, which was smaller and thinner than the Old Adult books before and after it.
That would not last: when we next see Tiffany Aching, her books will be exactly the same adult size as the standard Discworld format, and the complexity will continue to grow, commensurately.

The second Young Adult Discworld book looks, at first glance, to be about the Pictsies, the Nac Mac Feegle, crivens!, the Wee Free Men introduced in Carpe Jugulum and given their heads to rattle, battle and rampage to their hearts content. But it’s not. Instead, it’s about one small girl and the rest of this brand of Discworld novel will be about this one small girl’s progression until she becomes the last character Terry Pratchett wrote about and for whose final book we all awaited with such mixed feelings.
Welcome Tiffany Aching, daughter of the Chalk, witch-to-be.
This first book takes place when Tiffany is nine years old. She’s a quiet, unobtrusive girl, youngest of six daughters, second youngest child. She has brown hair and a very realistic, detached manner. She’s already very good at butter and cheeses, a talent very useful on a working farm, daughter of a farmer who was son of a shepherd.
Or rather the Shepherd, Granny Aching, Sarah Grizzell as was, two years gone at the time of this book, an old lady who knew everything that could be known about the caring for sheep. Not a witch, at least, not in terms that anyone would understand, or anyone who reads these books would recognise, but in her own way, on the Chalk, where witches aren’t supposed to be possible, an equivalent to Granny Weatherwax.
In fact, Granny Aching was the local Wise Woman, which is what witches really are, but the magic she wielded was of knowledge and approbation. She was the one you went to to see if you had done it right. Not the Baron, who owns the land, but Granny Aching, who was the land.
And what Granny Aching was has transmitted itself to the wonderful Tiffany, who is already a witch at the age of nine, albeit one with a lot of formal knowledge to learn, but a witch nevertheless, for the simple reason that she can see what is there, what is really there, and because she watches herself.
Though The Wee Free Men and its successors were always described as Young Adult Discworld, I don’t believe it. Maybe for this book, and its immediate successor, as Tiffany works through the remnants of her childhood and the difficulties of her adolescence. Maybe the authorial gaze is downwards, to a point, writing for children in writing about children. Maybe the geography, as in The Amazing Maurice and His Educated Rodents, is imprecise and distant, unlocated on and unanchored to the Discworld itself.
But this is not a book alone. It’s the beginning of a longer story. It’s why there are no more Granny Weatherwax books, because Granny and Nanny, wonderful creations that they are, are finished in terms of development, and because the two younger witches don’t really fit into one role.
Tiffany, though, is at the beginning, and that makes her far more interesting to a writer. She can slip, stumble and fall, she can learn from mistakes, she can from the very beginning accept responsibility in the way of a true witch, and still have to work out how to do it. She’s in a way, a purer version of Granny Weatherwax, who was not bred of the Chalk.
But all that’s getting away from the story itself, and especially from Tiffany’s co-stars, the Nac Mac Feegle. The story itself is strong, bright, clear, a children’s fairy story given a workover in Discworld terms. The Queen of the Elves is taking an active interest in the Chalk, her parasite world has attached itself, intent on sucking until it is full of the substance of elsewhere. She’s already taken the Baron’s son, Roland, a year ago. Now she takes Tiffany’s younger brother, Wentworth.
He might be permanently sticky, useless, self-absorbed and taking up entirely too much of her time in looking after him, but he’s Tiffany’s brother, her brother, which is more important than whether she loves him or not, and besides, she’s the only one who knows where he’s actually gone and that makes her the only one who can get him back. And because she can, she must. It’s her duty. And Tiffany is that kind of sane, rooted, determined child who not only knows what her duty is but understands why it has to be performed.
With only the help of the Feegles – a thousand or so six-inch tall, red-haired, blue-skinned, tattooed, aggressive, raging, Scotsmen turned up until something falls off, warriors – Tiffany goes to Fairyland to get Wentworth back. Roland is a bonus, even if everyone decides afterwards that it must have been him who rescued her and Wentworth. At least Roland knows otherwise.
And so do those who count, namely Tiffany’s fellow witches. That is to say, Granny Weatherwax and Nanny Ogg, summoned to do as Granny Aching would have done, to nod and say ‘That’ll do.’
The Wee Free Men is a lovely book, a lively book, a vibrant flowing current of life. Because it is this thing called Young Adult, it is more single-minded in its approach to the tale, but because it is Terry Pratchett, it knows when to divert into little eddies and streams that make this a more comprehensively painted world than most children’s books portray.
Crivens! We will not be fooled again!