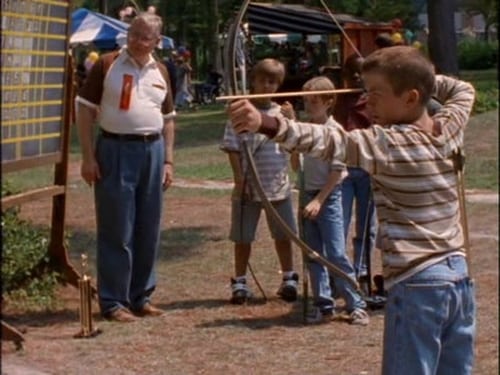 There are a number of reasons why American Gothic was cancelled after only one season, and I’ll be getting to those further down the line. But I wonder if, underlying them, there wasn’t a certain degree of queasiness at the depths into which the show could sink. There’s a lousiness to Sheriff Lucas Buck, a festering sickness to his machinations. Gary Cole was doing an incredibly good job in letting both aspects of Buck – the external, hail-fellow-well-met, town benefactor and the evil bastard – show simultaneously.

American Gothic is about corruption. It’s about trying to corrupt the decency of a ten year old boy, to turn him as evil, ruthless and conscienceless as his biological father, a man who acts not only out of the desire to do everything he wants to do, but who appears to wish to taint everything and everyone around him, just for the unholy pleasure of him.

I take it back, that’s a phenomenal performance by Cole, and to achieve it it requires some bloody good writing, and a willingness to put sick and twisted situations into play, in a subterranean manner, by implication rather than direct showing.

‘Dead to the World’ was a multi-strand episode, spinning three stories across each other effortlessly. It began with a flashback, ten years, to Deputy Buck picking up his girlfriend, Nurse Holly Gallagher, for the hospital, late at night. Holly G has stolen a file for Lucas, on a new baby, Caleb Temple. Unfortunately for her, she realises just why Buck has been so interested in this baby that has nothing to do with him. She also gets mad at how she’s been manipulated and promises to expose Buck, tell all of Trinity about him. So he drives her car off the bridge, into the river.

That’s confident story-telling for you. There’s no mystery here, the episode makes plain what it’s about. Except in one respect.

We move to Caleb next. He and his best friend Boone are practicing archery for the contest at the fair. Both are using pretty basic equipment, both are good but Boone’s better. Which is where Sheriff Buck steps in. Caleb doesn’t want anything to do with him, he’s naturally suspicious of the man, finds him creepy and a little bit oily in his constant attempts to insinuate himself into Caleb’s life (it’s one realistic flaw in Buck that he, like many people, doesn’t quite know how to talk to children: he comes over as ever so slightly patronising).

Buck’s determined that Caleb will win. He taunts him into killing a crow, which Caleb instantly regrets, he replaces Caleb’s bow with a lightweight, deluxe model, he sets out to drive a wedge between him and Boone. In the end it fails: Caleb wants to win, as does Boone, but the latter innocently as good, and if young Chris Fennell isn’t as good as Lucas Black, he’s still good enough to sell that as natural.

So Caleb, in mid-contest, hands back Lucas’s gear. He can still win it with a bull’s eye off his last shot, but falls short. Boone wins, Buck’s frustrated, the boys are still mates.

The third element of this episode centres upon Deputy Ben Healy. He’s out visiting a family. The implication of domestic violence is laid out immediately, though she’s too scared to confirm it. Or maybe there’s another reason. It’s allowed to slip out in passing but this isn’t any ordinary family: cabinet-maker Waylon Flood is second husband to Barbara Joy, and stepfather to Benji. Ben is Benji’s father.

Waylon’s one of these upfront bastards, a junior league Lucas Buck without the breadth of evil. He’s a nasty, stinking, small-minded little brute, throws his fists around, petty tyrant and always super-confident that he is right and ain’t no-one gonna mess with him. Ben’s not out for a fight but he still gets kicked in the balls, smacked in the face and punched in the stomach.

Ben’s determined to handle this himself, especially after Dr Matt warns him of the psychological damage this could all do to Benji, growing up with this as his role model. Ben rejects Buck’s offer to help and confronts Waylon again in his workshop, openly accusing him of cowardice, prepared to fight. But Waylon backs down. Ben isn’t aware but Buck has pulled up outside. Waylon starts to sweat, promises there won’t be no further trouble. Damn right there won’t. Believing he’s made his point, Ben leaves. Waylon’s still trembling. Buck returns, looks at Waylon. He backs off, stumbles, brings down a heap of stacked wood, knocks him off balance. His arm falls onto the bandsaw…

The speed with which it’s done is another American Gothic trademark. The show’s masterful at the slow creation of tension and the abrupt crash that jerks the viewer out of their seat.

But the main strand tonight is all about Gail, and all about Holly G. Miss Emory is still investigating Caleb’s birth and his Mama’s suicide and visits the Gallagher home to speak to her old schoolfriend, the attending nurse. Only then does she learn that Holly is dead, from ten years past, from mum Janice, a fluttery sort of woman, a beautician, selling makeovers, make yourself perfect.

The Sheriff confirms the details of the tragedy. Despite copious efforts with divers, the body was never found. Gail promptly heads for the bridge, hires two guys to help her. The diver finds the car immediately, only fifteen feet down, and T.J. (a fine bit of continuity from last week) winches it up. There’s no body inside. And the driver’s seat is set too far back for Holly to have  reached the pedals…

Janice is taking Gail’s attempts to find out just what happened as an attack on her. And for good reason. By a slightly dodgy contrivance, Gail discovers Janice is paying for a Sanatorium: Holly G is alive. And well, in body, but not in mind. She doesn’t recognise Gail is concerned only about if her boyfriend is there. Her boyfriend is: Lucas Buck appears out of nowhere yet again. Four minutes without oxygen has led to brain damage. Holly G lives, but all her abilities, all the potential her mother worshipped in her, is dead, and Janice can’t bear to see what’s not perfection.

And then we’re given a perfect example of just how effective Lucas Buck can be. Confronted with Gail’s accusations, and especially that he was driving, he conducts his own version of Show Not Tell. He drives Gail’s car to the bridge, to demonstrate. We immediately fear he’s going to try to disappear her too, but no, Buck’s more subtle than that. He knows the road so well he could drive it blind, and closes his eyes. He starts to go faster, telling Gail about how he broke up with Holly G that night, how she couldn’t take it, how she grabbed at the wheel and he lost control.

Just like a panicky Gail is grabbing at the wheel. On the bridge, the car slews. But this time Buck brakes before going through the fence. Leaving Gail with a perfect cover story she cannot counter. Not to mention a forceful kiss from the Sheriff.

Janice’s refusal to accept her damaged daughter is a final nasty touch in an episode of nasty touches. Gail tries to break through Janice’s shell, remind her that her daughter is alive, and would rather be home, but Janice’s fear surrounds her, she backs away.

Which makes the little scene that almost closes out the episode all the more effective in stinging the audience’s heart. Janice has brought Holly G home to her own room. Holly’s in her nurse’s uniform, Janice is reading to her from a text book, three vital signs. She names two, asks Holly G to give her the third. Smiling happily, Holly says, “Lucas Buck.” After a moment of immobility, Janice beamingly replies, “That’s right, blood pressure.” And she folds her arms round her dughter, telling her that she’s perfect.

And it is perfect. It’s a small moment, there in the dark, a miniature suggestion that it might be possible to get people to be brave, to now allow themselves to fall into the shallow courses Lucas Buck has dug for them. No more than that, not spelled out, for us to read for ourselves.

In contrast to the final scene, Buck in a hot tub, Selena teasing him with hot candlewax. Buck genuinely can’t understand why Caleb rejected the chance to be a winner. Stupid game. It’s not over, it’s along way from over.