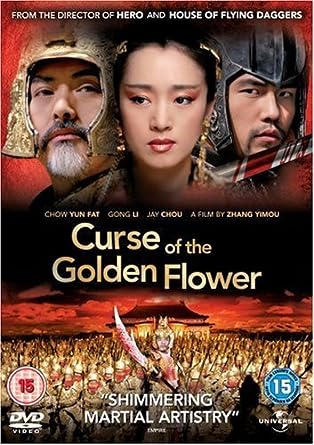 Not wishing to find myself having to work through a surplus of sub-titled foreign films at any point, I decided I would select another this week. Not being in the mood for any of my French collection (or my solitary Mexican: can you guess what it is yet?), I settled upon my only Chinese language film, the opulent high melodrama from 2006, Zhang Yimou’s Curse of the Golden Flower, better known in my erstwhile household as ‘Curse of the Heaving Bosoms’.

I have fond memories of seeing this film in the cinema. It was one of a tiny handful I saw when away in the Lake District, at Zeferelli’s, a small but luxury restaurant/ cinema in Ambleside. I was going to the Lakes on holiday at least once, usually twice a year between 1983 and 1996, yet I’d only gone to Zeferelli’s once: not out of any purist objection but simply because when I was in Ambleside, they were never showing any film I wanted to see! The previous week’s film, yes, the next week’s film, yes, far more often than was statistically probable, but this week’s never, except once, and that a special late-night performance.

(We’ll be seeing that film later on, as with the only other one I saw in the Lakes, this time in Keswick)

But my wife and I had gone away for a couple of days break, to Ambleside, and Curse of the Golden Flower was on, with a special restaurant deal that secured us a meal and priority seats, and we had a lovely evening, with good food and a film that held our attention, as well as giving us much cause for private amusement, not to mention the unavoidable nickname we coined between us, that sounds like something I’d come up with, but which I can’t any more remember if it weren’t her that invented it.

Curse of the Golden Flower was a next-but-one follow-up to the 2004 international success of House of Flying Daggers, which I have seen on television, though whether it was before or after this cinema visit, I don’t recall. I remember it being hailed as another major success, if anything greater than its predecessor, but Wikepedia tells me its reception was decidedly more equivocal: nevermind, we loved it.

The film is supposedly set in 928AD, on the eve of the Festival of Crysanthemums, for which the Emperor (Cow Yun-fat) has returned from distant warfare with his second son, Jai (Jay Chou). Jai, and Third Brother Yu (Qin Junjie) are sons by the Empress (Gong Li), daughter of the King of Liang, but the Crown Prince Wan (Liu Ye) is the son of the Emperor’s first wife, who believes to have been dead for twenty years. Wan and the Empress have been conducting an incestuous relationship (though they are completely unrelated by blood).

The Emperor has become aware of this. For ten years, he has prescribed medicine for the Empress’s anaemia, to be taken in ritual fashion every two hours. He has not had the Imperial Doctor (Ni Dahong) add to it a new ingredient, a Persian black fungus that, after a certain period, will cause the empress to lose her mind.

The medicine is brought to the Empress by Jiang Chan (Li Man), the Doctor’s daughter, who is also the lover of Crown Prince Wan.

But the Empress will not submit without a fight. She plots a coup, an Army 10,000 strong, bearers of the Yellow Crysanthemum, to overthrow the Emperor and install Prince Jai in his stead. Jai is a loyal son but, when he learns how his mother is being steadily poisoned, he agrees to lead her forces.

And the Empress has employed a very skilled female spy of a certain age to discover the new ingredient. This is Jiang, the Imperial Doctor’s wife, mother to Chan. But she is also the Emperor’s first wife, escaped from being put to death, and she is Wan’s birth-mother.

When the Emperor discovers Jiang in the Palace, he spares her, promoting the Doctor to the position of Governor of Suzhou, applicable immediately. But he plans treachery: black-clad ninjas attack, killing the Doctor’s party, and the Doctor, despite the intervention of red-clad soldiers sent by the Empress. Chan has already ridden for the Imperial Court, unable to understand her mother’s violent opposition to her relationship to Wan. Jiang pursues her.

But it is the eve of the Festival. The Emperor commands all. Wan has tried to kill himself when learning of the Empress’s plans, knowing that however innocent he is of this, he will be blamed by the country. He reveals all to the Emperor, who knows already.  The family, except Jai, who commands the Palace troops and has already sent them away, comes together. Chan and Jiang reach the deserted Palace and are attacked by Ninjas: the Empress’s red soldiers create a path for them.

Cruelly, the Empress reveals to wan and Chan that Jiang isWan’s mother. Wan is thunderstruck that she is alive, that his father has lied to him, but more so by the realisation, which also comes to Chan, that they are brother and sister and have committed incest. Chan runs screaming from the Palace, and is executed by the ninjas: Jiang follows, and suffers the same fate. The Empress’s Crysanthemum Army attacks. The rapid chaos is compounded when Wan is stabbed through the back by Yu, smiling, overlooked, childish Yu, sickened by the corruption he sees around him, launching his own bid.

But his men are rapidly slaughtered, and the Empress beats him to death with his heavy, gold belt. In the courtyard, shield walls topped by archers are raised around the Crysanthemum Army by a second army, acting on the Emperor’s plans: all except Jai are slaughtered.

The Empress may herself have already gone mad. The Emperor remains in total control. His favourite son is dead. He had intended to make Jai the Crown Prince, and heir, after the Festival in any event. Now Jai is a traitor, to be torn apart among five wild horses. He will be spared on one condition: that he personally feed the Empress her medicine, every day. Jai feigns to accept this condition but uses the chance to seize a sword and cut his own throat. His blood splashes into the medicine, which the Empress knocks away. It falls upon the Crysanthemum sigil at the centre of the table, where it burns…

Phew! I think you will understand what I mean by high melodrama. Some critics at the time categorised the film as just falling short of High Camp.

But this is just a compressed summary relating only the plot and set-up. It can’t give anything of the true flavour of the film. I’ve already used the word opulent, and there is no better description of the look of the film, during the vast majority of its expanse that is set in the Imperial Palace. The film is besplendent in colour, with gold the predominant element, counter-lit by a harmonic dazzle of other bright colours. Even in the relatively intimate quarters of Palace rooms and corridors, and I am using ‘intimate’ solely by way of contrast to the larger halls and the Imperial Courtyards, the Crysanthemum Terrace et al, the sense of size is overwhelming, as is the sheer volume of servants, rows and rows of them in identical dress. And the sheer amount of ritual involved in anything. The film is a massive depiction of a culture that I can’t pretend to even begin to understand: what does it do to someone to be the centre of all that power? What does it do to someone to be at the centre of all that power and to know yourself to be utterly at someone else’s whim?

The spectacle is awe-inspiring and also repulsive. I couldn’t live within that system, at any level from bottom to very top. To have nothing, no individuality, to sense of even limited control over what you do, who you are, what you are, would be impossible for me to survive. I ought to hate this film.

Yet I enjoy it, from the outside, from beyond the screen. It is vast and strange. The emotions it depicts may be human at root, but they are human twisted through things that cannot leave them human, not in terms I can accept. Curse of the Golden Flower does to me what films used to do to everyone in their early decades: it transports me to a time and a place and an existence that I can’t begin to participate in, even if I wanted to.

As for ‘Curse of the Heaving Bosoms’? Well, you only need to look at the female clothing. With the exception of Jiang, all the women in this film, and very notably and noticeably Gong Li, wear tightly bound, stiff-waisted dresses, cut to a line just above the nipples, pushing the top halves of their breasts upwards and outwards, like the ‘inspiration’ for every cheap, crude and completely British tit gag ever cracked – like two bald midgets fighting in a sack’ anyone?

It must have been bloody uncomfortable to wear, but it has its memorable aspects…