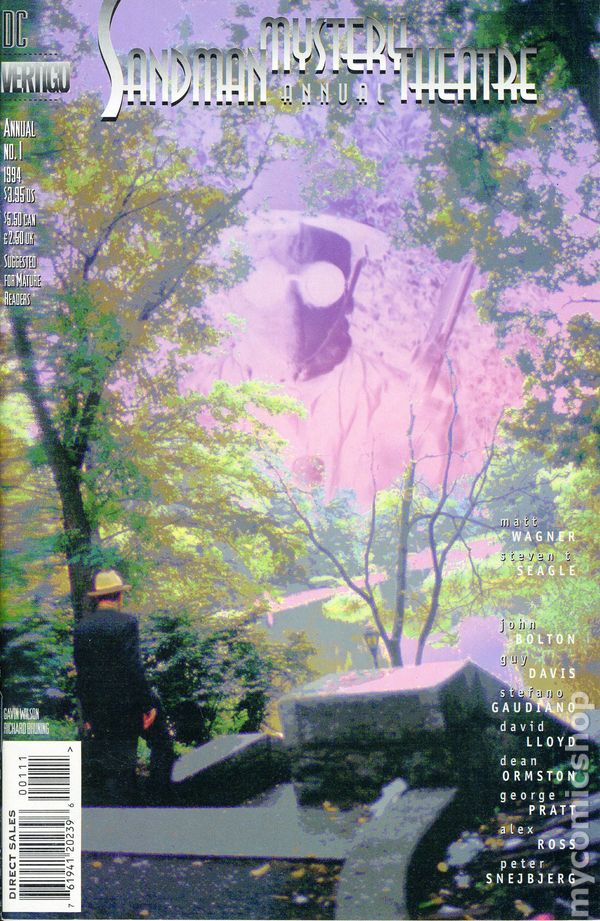 In 1993, Vertigo Comics began publishing a spin-off to Neil Gaiman’s extremely successful Sandman series. Entitled Sandman Mystery Theatre, the spin-off focussed on the adventures of the original, Golden Age Sandman, Wesley Dodds, creating the unique situation where the subject of a spin-off was the original character from whom its ‘parent’ series had been spun off.
Gaiman’s series bore almost no resemblance to the Golden Age crime-fighter, or any of the revived versions that had already been seen, but his character, Dream of the Endless, was inspired by the Sandman name, and one of the first steps he took on starting his series was to bind Wesley Dodds into its mythos. Dodds had had no origin story in the Forties, but had had a convoluted story spun for him only a couple of years earlier, by Roy Thomas, only for Gaiman to dismiss this in a single panel, providing the simpler, and much more thought-provoking notion that Dodds was driven to his alter ego by dreams caused by the absence of the mythological presence of Dream from the Universe.
This explanation was taken up by writer/artist Matt Wagner, most of whose work has been done in the independent market (Mage, Grendel), but who has occasionally dipped into DC to shake up some of its older conceptions Wagner pushed for a Wesley Dodds series that would reinterpret the character in the light of his dreams: driven by them to unravel puzzles and crime in the late Thirties: puzzles and crime that, beneath a very stylish pulp veneer, would focus upon the genuine social ills and hypocrisies of the era. In 1993, he was given his opportunity.
Mystery Theatre would never hit the commercial heights of Gaiman’s series, but it sold enough to run for just under six years: 70 monthly issues, an Annual, and a couple of short stories in Vertigo compilations. As so often happens on cancellation, there were promises of repeat business, in mini-series, but the end of issue 70 was the end, even though that was (deliberately) halfway through the latest play.
Because that was the series’ conceit: that each story arc was a four-act play, with a different stage designer, or artist, for each drama.
Matt Wagner was the inspiration behind Mystery Theatre but only wrote the first three arcs, issues 1-12. After that, he worked with Steven T Seagle from issue 13 to 52, plotting each story for Seagle to dialogue. Wagner then withdrew from active contribution, limiting himself to suggesting settings and themes, before dropping out entirely after issue 62, leaving Seagle as sole scripter.
The intention was for each arc to be drawn by a different artist whose work was suited to the noirish, Thirties setting, and the first three arcs were drawn by Guy Davis, John Watkiss and R G Taylor respectively. But Davis’s renditions of Wesley Dodds and Dian Belmont, and the supporting characters, not to mention his depiction of the era, was so powerful and defining that an arrangement was worked out for him to become the series’ semi-permanent artist, drawing two arcs each year, with the third drawn by a guest artist.
To date, 52 issues of Sandman Mystery Theatre have been collected in a series of eight graphic novels, a mixture of single and double-arc collections. There are currently no plans for volume 9, though (assuming that the Annual and the short stories are not to be reprinted) the rest of the series could be collected in two further volumes.
The series ended midway through its final drama, with Wesley and Dian suddenly leaving New York, with the mystery of the latest monster unsolved, but with other mystery-men, not to mention the Police, poised to take it on, and with enough clues (allegedly) having already been given to enable the reader to decipher the mystery alone. This depiction of Wesley Dodds permeated back into DC itself, and the Justice Society, but it didn’t sell in the numbers needed to keep the series going, and in the New 52, there is no Sandman comparable.
So join me beneath the proscenium arch, as the curtain goes up on a series of plays, as the spotlight shines upon a dark stage, and those corrupted players  move upon it. Settle comfortably in your seat, ensure all mobile phones are switched off, and let the house lights dim. Appearing in our first performance, for your delectation, Ladies and Gentlemen, I give you the first play by our Repertory Company…. The Tarantula.