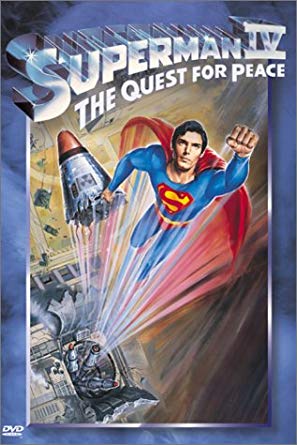 For a working Sunday, a film is needed that can be summarised quickly: very well then, Superman IV – The Quest for Peace is crap.

On the other hand, I can’t summarise it that baldly, so here’s a few words about why it’s crap.

After the failure of Superman III, the Salkinds took a decision on the future of their franchise. They decided that Superman was played out as a movie character, instead of the more logical explanation, which was that fans thought Richard Lester’s approach was moronic. So instead of getting in writers and a director who could restore the character to a measure of the dignity displayed in the first film, they sold the rights to Golan and Globus, the Israeli producers who operated as Cannon Films.

This was not a good move. Yes, Cannon got Gene Hackman and Margot Kidder back, but they did not get New York back. Instead, ‘Metropolis’ was filmed in England, near Milton Keynes, on a shoestring budget. And doesn’t it show. Whether the franchise could have been revived or not, it wouldn’t be this way and Superman films were dead in the water for twenty years.

My viewing this morning is only the second time I have ever seen this film. And there are parts of it I have never seen, since I took a date with me and snogging in the middle row was much more entertaining than the film, trust me it was. And whilst that was not the mostsparkling ever relationship of my life, I could have done with a bit of snogging today.

One day, if I have the time and the energy, I might watch this film again with a view to a point-by-point demolition of it’s… qualities, starting with the rancid credit scene where names loop and swoop across the screen in a manner dangerous to those easily nauseated, and ending with the closing ‘battle’ in which the Laws of Physics are not so much ignored as despatched via warp-space to another dimension entirely, and about how parts  of the film display some of the worst aspects of DC Comics of the Seventies whilst others are more akin with the stories of the Forties. Just not today.

I described the film as crap. On more detailed thought I’d like to expand that to three words, these being cheap, moronic and deadly dull (technically, that’s four but I’m choosing to regard deadly dull as a single unit, since it is distinct from merely dull).

Cheap is self-evident from the awful blue-line special effects. There are many, too many ‘flying’ scenes where Superman or his newly-created opponent approach the camera head-on. In films 1 and 2, despite the primitive technology of forty years ago, these were never seamless but were convincing. In IV the bluescreen technology is shoddy at best, with the actors not merely separated from their backgrounds but lit from a completely different, nd queasily unnatural source.

Moronic is self-evident from the film’s theme. I’m sorry to say this about the late and entirely delightful Chruistopher Reeve, who suggested and helped develop the story out of a genuine concern for the proliferatiion of nuclear weapons world-wide (as who wasn’t under President Ronnie Reagan?), but the idea that you can dramatise that in a cartoon-like manner using a superhero is theEncyclopedia Brittanica definition of moronic.

Firstly, Superman declares war on nuclear weapons, prompted by a letter from a small boy, and chucks every single one into the sun. So Lex Luthor uses a strand of Superman’s hair to extract his DNA to create a Nuclear Man (a cardboard cut-out, crappy uniformed, mulleted piece of beefcake played by Mark Pillow who gets to roar but not speak as all his dialogue is dubbed by Gene Hackman: I hope the poor sod was well-paid).

So the threat to World Peace is symbolised by a long, drag-out punch-up between Suuperman and Nuclear Man that is not even as well-choreographed as your average ITV World of Sport Wrestling Bout in the late Sixties (4.00pm up to the football result), which Superman wins even thoough Nuclear Man is stronger than him.

And deadly dull? The film’s whole 86 minutes demonstrates tht. It’s loose and unstructured. It takes 40 of it’s 86 minutes (including lengthy credits at each end) to even introduce Nuclear Man. It wastes a lot of time on an uninteresting sub-plot whereby a Rupert Murdocch-like tycoon buys the Daily Planet to turn it into a raging tabloid whilst his slim, chic, long-legged daughter lusts after Clark Kent (I have never yet seen a convincing performance by Mariel Hemingway, nor have I ever fancied her in anything).

But I was pleasantly surprised by one aspect of the film, which I found genuinely appealing, and that was the relationship between Lois Lane (welcome back Margot Kidder, even if you had to be horribly dressed to prevent you from outshining Ms Hemingway, which didn’t work) and Clerk Kent. True, the film borrows shamelessly from both Superman – a flying scene, this time round the United States – and Superman 2 – revealing his identity and removing it with another amnesia-inducing kiss – but in both this and, more tellingly, elsewhere, the film portrays the pair as genuine friends, caring about each other, and Kidder’s performance is full of a warmth and a relaxed nature about her friend. He’s still a klutz, still annoying in that respect, but Lois understands how genuine Clark is (the irony) and accepts and respects him as that. These are moments of illumination in a film that can’t otherwise be taken as anything but dim.

The only other comment I want to make now is something I picked  up on almost from the film’s beginning that I can’t decide if it is a subtle element in Reeve’s as usuaal brilliant performance in distinguishing between Clark and Superman or which is projection by me, but I thought I detected a subtle strain of underlying exasperation, never remotely overt, from Kal-El over the continued absurdity and minor humiliation of everything he has to do be ‘be’ Clark.  I know I’d be sick of it by now.