The Science of Discworld 2 (henceforth known by its sub-title, The Globe), is much better than Science of Discworld 1. This is because Terry Pratchett’s part of the book is occupied with a much more compact story, with a dramatic unity lacking in the first volume, and also making for better and more frequent jokes.
Literary readers will immediately sniff out that the story revolves around William Shakespeare, so it’s not giving anything away to admit that, rather than a participant in the story, Bill the Bard is actually its solution.
It’s all down to the Elves. Somehow, they have made it out of their parasite universe, through Discworld and into Roundworld, accidentally dragging with them a group of Wizards out on a team building exercise. Rincewind, as Professor of Cruel and Unusual Geography, keeps Roundworld on his shelf and receives the message from Ridcully about getting in here, in order to get them out.
Of course, by the time Rincewind and Ponder Stibbins get into Roundworld, courtesy of the Librarian and the mysteries of L-Space, the Wizards have settled down in Elizabethan times, made friends with Elizabeth’s chief magician, Dr John Dee, thoroughly confused him by telling him there is no magic (which, after all, is the case on Roundworld, due to its lack of narrativium), and have decided not to let the Elves get away with it.
Except that sending the Elves back where they came from, in the pre-history on Roundworld, leaves a world of humans without intellect, curiosity, intelligence or initiative. The Elves are necessary for the development of humanity as a species. Unfortunately, if left unchecked, humanity will not get off Roundworld in time to escape the destruction that was established in Science of Discworld 1.
So it becomes the job of the Faculty to work out a away of allowing the Elves to kickstart fear, curiosity and intelligence, whilst preventing them from scaring the human race into oblivion.
It’s in these various attempts that the meat of the story exists, including Pratchett’s exposition on what is becoming a recurring theme in this mid-period Discworld books, namely the separation between the space outside and the space inside a person’s head, and how much the latter becomes a fundamental part of our ability to be what we are.
The Elves stay mostly offstage in this story, unlike in Lords and Ladies, save only for the Queen, who is not at all changed from her role in the earlier story. She remains arrogant, convinced that the Elves have succeeded, and for the same reason, namely the belief that they cannot be defeated. This means that she is completely blind-sided by the attack that is made entirely out in the open.
And of all people it’s Rincewind who knows how to defeat the Elves permanently. What Roundworld needs is its greatest playwright, William Shakespeare: to be born, to survive, to leave Warwick, to enter the Theatre (the achievement of which being the responsibility of the other Wizards, continually shifting things about to create the only line of alternate futures that produces this outcome).
Because Bill the Bard will write, and the players of the Globe Theatre will perform A Midsummer Night’s Dream. And by doing so he will place in the minds of Men an image of the Elves that will grow to become the only image of the Elves, which will supplant and thus deplete the image of the real Elves that they have thus far maintained.
The Wizards take the battle away from the Elves, away from every battlefield on which they can fight, by removing it, oh so very gently, onto the one battleground they cannot attend. And without ever knowing how, they lose. What Humanity becomes survives long enough to leave the planet on cue…
It’s an ingenious solution, though not an original one. Neil Gaiman had long been close friends with Terry Pratchett when The Globe was written, and in issue 19 of Gaiman’s comic, Sandman, Dream of the Endless engages William Shakespeare to write a play that will retain the memory of Oberon and Titania, not to mention Robin Goodfellow, the Puck, on a plane from which the host of Faeirie has departed.
A different story, a different purpose, a different end. But not a different idea.
Yes, The Globe is a much better book, because Pratchett is allowed to tell us a story instead of a history. He’s given space to do it properly as well, none of those ‘chapters’ that barely extend over the page, so that not only does he get a decent run-up at the gags, the story is far less choppy to read, even when you’re cutting Ian Stewart and Jack Cohen’s bits out.
And I know I’m denying the whole purpose of the Science of Discworld books by doing so, but if the science interests you, feel free to hang back and read it. I have the book that has been my favourite of all Terry Pratchett’s novels to reconsider next. 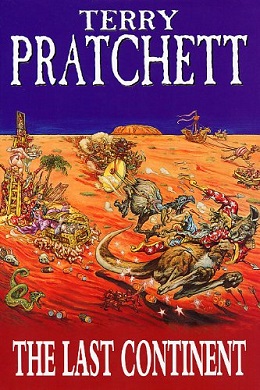 Incidentally, the cover depicted above is that of the hardback. For some reason I’ve never really fathomed, Josh Kirby was asked to paint a new cover, depicting the same scene but giving Nanny Ogg more prominence, for the paperback. It makes more commercial sense, I suppose. But the first version is the better image.

Every year, when I went on holiday, in those days before television in the rooms became standard, I would take away with me books to read in the quiet evenings after a day on the fells. In September 1986, I badly miscalculated my reading times and ran out in midweek.
It was late in the evening, I was in Keswick, the bookshops were closed and I was running round the newsagents/giftshops that were open until 8.00pm, desperate to buy something I could enjoy reading. But I was struggling to find something that appealed.
There was another Terry Pratchett book about, The Light Fantastic, a sequel to The Colour of Magic (literally so, the only Discworld book to follow directly on from its predecessor). I was dubious of it but the hour was getting late. It probably wouldn’t be much cop, but at least I knew I would be able to read it, and besides I could always sell it on. So, better than nothing.
I have never seen such an improvement in a writer in just the space of one book.
At the time, I only knew Pratchett from the Corgi paperback of half a year earlier. I hadn’t even noted the hardback publication date, so as far as I was concerned, the writer had made this quantum leap in the space of six months. I roared my head off reading The Light Fantastic, knowing that I’d have to re-buy the first book.
What made such a difference? I can make a few points now, but essentially it was down to my instinctive impression on that night’s reading, that in the intervening space, Terry Pratchett had sat down and thoroughly analysed his ‘first’ book, seen where it didn’t work and had set out to do it right this time.
That it had taken him three years to work it out, not six months, doesn’t lessen the impact.
The Light Fantastic was in every way a better book. For one thing, it was a single, coherent story that went several steps beyond The Colour of Magic in developing several narrative voices across a number of characters. Rincewind and Twoflower are hauled back from their fall off the Disc via a resetting of Reality, whereupon they become the target of any number of Wizards from Unseen University, who want the Great Spell back out of Rincewind’s head.
Which is particularly important because Great A’Tuin, the galaxy-sized Turtle, is gradually swimming out of the Discworld Universe’s space towards a single red star. And people are panicking more than somewhat.
But the book had gained more than a plot, it had gained an authorial voice. Pratchett now sounds like Pratchett. He is still nicking tropes from fantasy fiction, but instead of parodying other people’s works, he’s taking archetypal situations and using them in a basically straight manner, whilst undermining them via the responses of his characters. And his jokes sound like Pratchett.
The version of Unseen University we meet here is very rough-edged, and inherently unstable. Pratchett is still a long way from discovering that the most effective form of magic is the one you don’t do, and the Wizards of this Faculty are still overtly competitive. The entire Faculty, the eight Heads of Orders that Pratchett quickly learns he can do without, are wiped out, Archchancellor Galdor Weatherwax (hmm. Significant name, that) by the Luggage, the rest by Tymon, the ambitious but ultimately grey Deputy.
Tymon is actually the most significant figure in this book. He may be magically apt, but he’s the anti-Wizard, Organisation Man, determined on an efficiency that takes the passion, the satisfaction, the fun out of everything. Pratchett finds his true voice, the true purpose of his talent, in inveighing against him as the antithesis of what is needed to be properly human. He still has to learn to let that voice go, to let the anger within form the solid backbone of Discworld, but this is where it first shows.
The Light Fantastic also introduces us to Cohen the Barbarian. Whereas Hrun, in the first book, is a generic barbarian, distinguished only by his unusually small head, Cohen is a far greater conception, the barbarian who has been a legend so long that he’s grown old in his trade: eighty-seven, bald, toothless and a martyr to arthritis, but still unkillable. In the clash between him and Herenna, the Henna-Haired Harridan (visually a more sensible take-off of Marvel’s Red Sonja), there’s only one winner.
We also are privy to that moment, early in the book, where a ball of wild magic rises through the library, transforming the Librarian into, well, The Librarian. His response is, naturally, Oook.
Rincewind comes out of it seemingly on top, supervising the clean-up at Unseen University, in position to take over as Archchancellor. It was never going to be that way, and Pratchett may well have known that already, but since Rincewind wasn’t going to be used in the next book, it was a sentimental gesture at the time, a tidying-up. Sometimes, writers develop a sentimental attachment to their characters, almost as much as readers do. There’s a scene in a much later book where Pratchett demonstrates by how much he learned to know better.
In short, a vastly better book, and more importantly, one on which Pratchett could begin to build the towering edifice that will become Discworld. It’s less the architecture that we see taking shape, than the attitude of Discworld, that of a world in which a certain literalness will forever undermine the fantastic, putting it into its proper place.
My eyes were now wide open for the next book from Terry Pratchett.