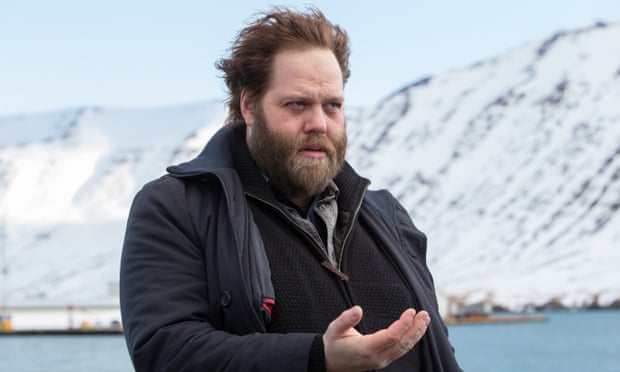 So the seige of Seydisfordur has ended and Detective Trausti and his trusty team (including the press-leaking Thor) are on the scene, just in time to have a suspect handed to thm on a plate by Andri and Co. It’s an easy win, an open-and-shut case, a quick score: less than a single episode and Andri’s ex-partner in the Reykjavik Police is heading back home with a signed confession in his back pocket and said suspect, the poor, put-upon, cuckolded Sigurdur in the back seat of his helicopter. There’s only one minor problem…

Except that there are several. Trausti arrives with not only an over-inflated opinion of his own value but with a contempt for and hatred towards Andri that leads him to instantly dismiss any idea or opinion held by the man who has led this investigation for the last five days. Sigurdur is clearly undergoing some form of mental stress: he looks and acts like the victim of extreme shock, his expression that of someone who has no idea what e’s seeing, his mouth perpetually open. He can’t speak, only breathe, loudly.

To Trausti, it’s a con, theatrics, a put-on. When Andri suggests a doctor, Trausti dismisses not just the idea but the Seydisfjordur trio: the case is his and his men’s alone.

As a stopgap, Andri and Hinrika start to pursue the issue of the trafficking of the Nigerian girls, tracing the snowman-breaking to the African chef on the ferry, and getting, through him, a lead on Captain Carlsson and his ‘friend’, who is revealed as being the Engineer.

Trausti goes off to search Sigurdur’s home, dismissing the alibi his wife Aldis provided for him, seemingly with good reason, for the search turns up a chainsaw, that has not entirely been cleaned of blood. Trausti heads back to the Police Station to resume browbeating Sigurdur, who is still not speaking. There’s smething about his face though, as Trausti lead through an imagined scenario creating a motive for killing Mayor Hrafn, as if he’s listening with polite interest to something that doesn’t really concern him, whilst working something out in his head, and it’s a brilliant performance by Thorstein Bachman.

By the time Andri and Hinrika get back, Siggy has confessed, in writing and Trausti is triumphant. It’s bullshit, and we know that instantly because the confession – to two murders – is about eight straggly lines of handwriting long. Andri is bemused and contemptuous. It lacks everything, especially when it comes to Hrafn. Evidence is overlooked or ignored, motive is absent, it’s the work of an amateur, but Trausti doesn’t care: it’s a confession. He’s cracked the case in half a day, where Andri didn’t in five. One press conference in the open air and it’s helicopter back to Reykjavik with the prisoner.

Who, under the eyes of the television cameras, once the copter reaches an adequate height, springs his cuffs, yanks open the door and throws himself out of the helicopter to his death. Just one little problem…

Trausti has fucked it up completely, but he still holds himself out as being superior to Andri. After all, Andri fucked up a case in Reykjavik that resulted in a dead girl never being found, and her killer getting away with it. Trausti still thinks he’s better than Andri. After all, he got his cushy Reykjavik job through shopping his senior partner to the bosses for strongarming the wrong suspect…

Andri is seriously pissed off, enough so that the genial, loadbearer briefly takes it out on those around him, contemptuous of Hinrika for not knowing what ‘real’ police work is, dismissive of the estranged Agnes who tries to help him set up a temporary bed on the couch: the roads are clear, why hasn’t she pissed off back to Reykjavik with her new boyfriend and his kids?

But Andri being Andri, he’s soon apologising. Hinrika isn’t bothered about apologies, just about the true story. Andri admits that the last five days, genuine investigating, is the real him, not the small town Police chief. Spurred by Hinrika’s support, Andri decides to arrest Captain Carlsson, even though the idiot Trausti, in complete ignorance of what’s going on, has eleased the ferry to leave…

Still, Andri gets there first and he and Hinrika start questioning Carlsson at the station, until the fool Trausti throws his weight about, ordering Andri to a more important task: stopping Sigurdur’s widow, Aldis, from talking live to the Press and criticising the Police. The idiot even shuts down Hinrika’s questioning even as Carlsson is beinning to admit something dodgy’s going on, and that he’s only part of it out of fear.

Andri has no intention of shutting Aldis up. In fact he agrees with her: the investigation’s been a complete bodge-up and he doesn’t believe Siggy was guilty. Aldis now admits to him that, on the night of Geirmundur’s murder, Siggy did go out late on, summoned by Hrafn, and that she didn’t see him until morning, when she found him in a state of shock, refusing to tell her what’s going on.

Armed with this and some info from his friend the coroner in Reykjavik that confirms Trausti has even got the murder weapon wrong, Andri writes a report to the Police Chief in the capital. Siggy’s suicide is headline news, and the idiot is the ideal candidate for a scapegoat. And if you weren’t enjoying that enough, we are to find out that Asgeir has leaked Andri’s secret report to the Press. As a favour to Andri, our favourite TV producer will keep it quiet for a while, but now she’s twisting the knife in Trausti’s back even further, by asking whether Sigurdur fell – or was he pushed?

Suddenly, the invesrigation is not only open again, but it has a new leader: Andri.

And things are developing rapidly on the trafficking side. Carlsson, in return for protection for his family, starts to cough to the Police. His ‘friend’ is no friend, nor is he an engineer. He’s a vicious bastard, a frightener, and he hasn’t left the boat in years, either in Iceland or Denmark. And there are things going on in Seydisfjordur that the Police don’t begin to suspect.

With Reykjavik’s assistance, the ‘engineer’ is identified as a very dangerous criminal named Dvalinn (it’s pronounced Dwalin, as in The Hobbit). And now he’s left the boat and gone to the hotel to contact Gudni – who, like his friend Leifur of the fish factory, is thankful Siggy’s not going to be talking). Slightly surprisingly in a man so all-fired dangerous, he gets captured by Andri and Asgeir.

Slowly does it. Andri’s back in charge, with a lot to do, but with at least a breathing space. Agnes fills some of that breathing space by coming to apologise for how she’s treated Andri. He’s philosophical about the breakdown of their elationship, the fact that they both hurt each other, albeit unintentionally. He’s even begrudgingly admiring of boyfriend Sigvaldi, who isn’t a total dickhead and who’s behaving better than Andri could have done.

There are going to be consequences of this. I mean, Sifvaldi’s already suspicious when Agnes and Andri come home together…

In the morning, the sun’s out, everything’s thawing, it’s peaceful and quiet. Andri has his washing to do. His mother-in-law adds some things, but tells him not to wash father-in-law Eoirikur’s pants: they’re ‘reeking’ and she’s going to wash them separately, tomorrow. But as Andri is refolding them, somehing falls out of the pocket. It’s a key. A padlock key.